I didn’t have the kind of father who would fake reindeer tracks. And Mom would never have left us alone in the house, not even for as long as it might take to do it.

So I knew no human made those marks.

My sister Stacy wasn’t convinced it had been reindeer. Any animal could have made them, she said. We stood on the couch in our nightgowns and pigtails to look out the window, our bare feet scrabbling for purchase on the sagging cushion. We argued in whispers while Mom made coffee.

We told Mom we wanted to make a snowman.

“I guess,” she said, frowning, looking out the window. “You don’t want to open your stockings first?”

We shook our heads in unison.

As we put our clothes and snowsuits on I asked, just to be difficult, if Dad was home. We hadn’t seen him around that morning but that didn’t mean much, because he often slept the day away, especially after the nights he came home at dawn.

“Why does he stay out all night, sometimes?” Stacy asked.

That was always the answer.

We knelt down in our snowsuits, while Mom stood listless, staring at the road, the trees.

We didn’t know what reindeer tracks looked like but we knew these were not them. These were spidery and splayed like the claws of a great bird, blue-dark deep here, there a tracing on the crust of shining snow, as if the creature had scuttled, settled, then scuttled again.

“Girls,” Mom said behind us, her voice like a branch breaking. “Inside. Stockings. Now.”

We sat on the living room carpet while my mother paced. We knew what would be in each stocking: Hairbrush, socks, pencils, orange. The same things every year. Things we could use.

When we were younger she used to pretend the stocking oranges were treats, that they tasted better because they were special. Our magic oranges, she called them. They would keep the monster away all year.

Monster, singular. That didn’t strike me as unusual, when I was very young. I didn’t know it was strange that our family had its own monster, or that my mother believed in it.

This time she said nothing about treats or magic. She just looked out the window and frowned.

This time, one of us decided to argue.

“These are different,” she snapped. “These are gifts. Gifts have power.”

My mother turned her eyes on us, then, at last. She dug her thumb into an orange and tore some of the peel off; they were the loose-skinned little ones with the big seeds my mother called pips. Then she knelt and grabbed Stacy by the shoulder, then sat on her legs, holding her against the side of the ratty brown couch. Mom stuffed the wound side of the orange into Stacy’s mouth, ripping more of the peel off with her long fingernails as she shoved. My sister’s lips, contorted with weeping and wet with tears and juice and snot, opened enough to let the flesh in, to let the pips drop out of her mouth into my mother’s hand.

I ate my orange piece by piece, in silence. It was so sweet it was eye-watering, so sweet it was bitter. I spat the pips out neatly, into my child’s palm, before my mother came to collect them.

Stacy and I sat defeated beside the spindly pine tree. I remember how the needles on the carpet stuck to my sticky hands. Mom threw the pips one by one at the door and all the windows, as she did every Christmas.

The little pips struck hard and too loud, like larger things.

When Mom had thrown them all she went around again and picked them up. She saved our Christmas pips all year. Some mornings, in bed, we heard her throwing them. I tried to pretend it was birds hitting the windows.

“Okay,” she said, red-faced, standing in front of us. “We might as well start the presents. Your father won’t be coming in this morning.”

I never called my father Dad after that. His face looked sad when I called him “Jimmy”, or when I refused to speak to him at all, but there was nothing I could do about that. I knew he was different, somehow, when he stayed away from us at night. That was all I needed to know. I never wanted to meet the monster that we kept out with my mother’s bitter magic of small gifts and defiance.

Kate Heartfield is the opinion editor for a daily newspaper in Ottawa, Canada. Her fantasy and science fiction stories have appeared in places such as Daily Science Fiction, Waylines, Lackington’s, Black Treacle, Postscripts to Darkness and Spellbound. Kate grew up mainly in Manitoba but lived for a year in Belize as a teenager. She is working on a historical fantasy novel and usually writes at night, after her toddler falls asleep. Her website is heartfieldfiction.wordpress.com and she is on Twitter as @kateheartfield.

I did a search for Christmas + flash fiction and found your great piece! I plan to have my creative writing classes read this today.

I like the way you create the denial of truth and dissipate it with the father's name change. 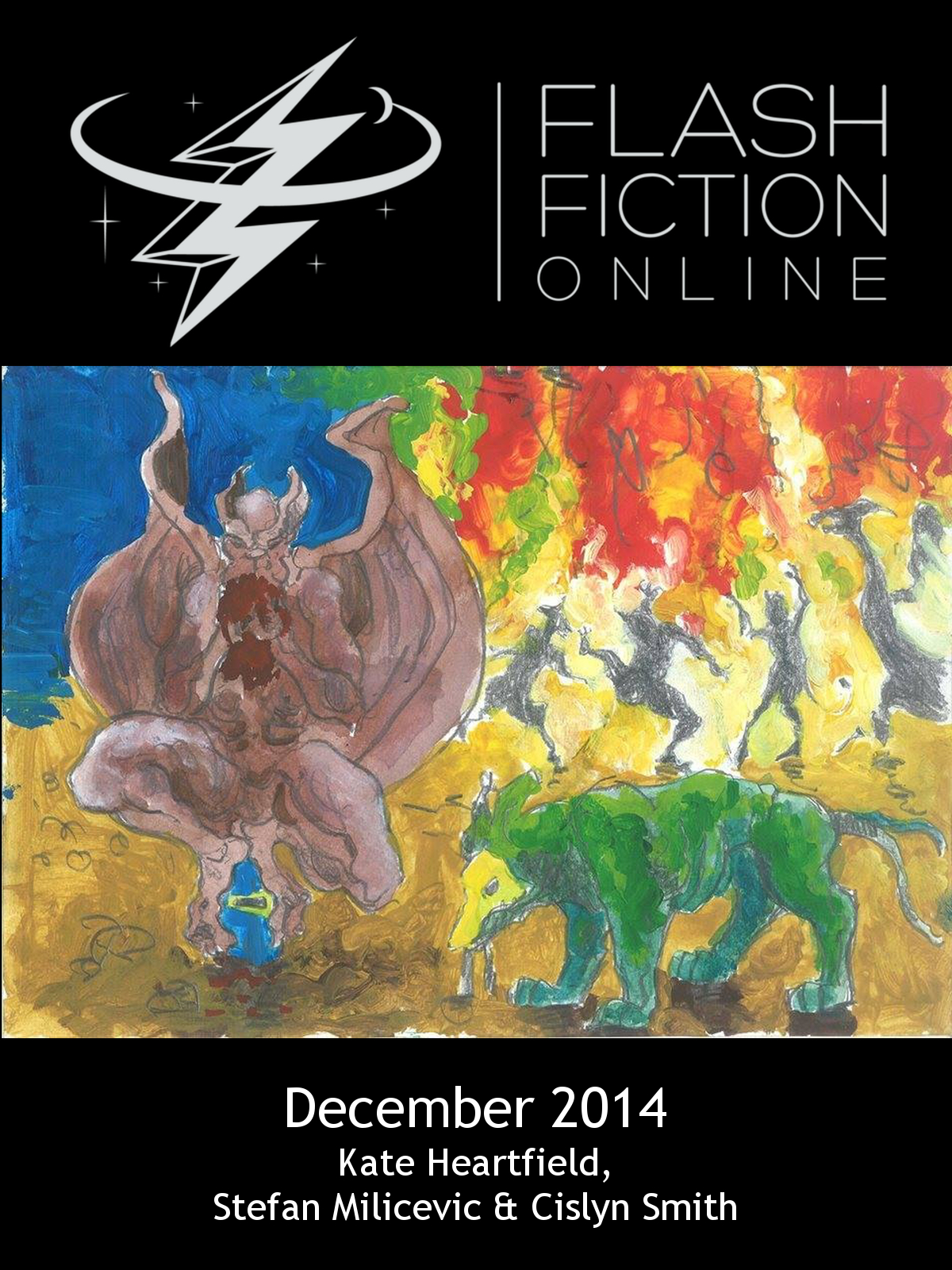