Rex could teach anybody to quilt. He didn’t care if you’d never sewn before, if you’d never held a needle. He had a gift, knew the fabric, and inherited a lifetime of needles from his grandmother. Quilts came together easy under Rex’s careful eye.

It didn’t matter if you had no money. Goodwill was brimming with fast fashion’s detritus, and Rex could pick up a pallet of it for forty bucks. Holey jeans with busted out thighs, lacy shirts that never looked good off a mannequin; if it was cloth, it went in the box. Rex hauled all of it through Alderwood Coffee’s back door every Sunday and sorted the pallet in their conference room by color, composition, and vibe.

All used fabric had vibe, and even Goodwill discards knew love once. A SeaWorld tee-shirt with a hint of nausea in the seams, a handknit sweater turned to felt in the washing machine, a Halloween costume torn when its wearer was caught TP-ing a neighbor’s house.

He could teach stitching, but vibes were deeper, a talent everybody felt and nobody could match. Rex cut the bad vibes out of the pallet of clothes and sifted all the best to the top of the stacks where his students would find them quickly. His students were artists, they made their own design, but they never had to dig far to find the perfect fabric.

Oliver came in with a coffee. The kid never owned a needle before Rex. Barely owned his clothes, and there was a new rip on the hem of his grubby tee shirt. The kid wasn’t punk enough to have done it himself.

Oliver scooted the cup across the table.

“You shaved your head,” said Rex. He knew not to comment on the rip. Oliver hated heroes worse than bullies.

“Like yours,” said Oliver, running a hand over the light brown fuzz that was nothing like Rex’s steely gray.

Oliver grinned. “Bald is beautiful, but not as beautiful as that coat, my dude.” He pinched the sleeve and tested the fabric. “Whoo, like a fireplace in a storm!”

Rex’s jacket was quilted all the way down to his knees, with a high collar and enough pockets to hide half a city’s secrets. The jacket had taken him a year to build. The fabric was stitched into a deep forest scene with stars along his shoulder blades, but the picture was nothing compared to the vibes in the fabric. Graduations, favorite vacations, perfect gifts from friends you haven’t seen in years. Those feelings are rare in $40 pallets from the Goodwill.

Rex primped the collar. “A lot of care went into this jacket.”

Oliver pulled his sewing from a duffle bag and tossed it to Rex.

He caught it and unfurled a finished top, each block a portrait of the other students in Rex’s class.

“You can keep the blanket,” said Oliver. “I need myself a coat.”

Oliver’s jacket came together slowly from the clothes Rex brought each week. The kid dug deep through the stacks, overturning Rex’s careful assortment. He worked in black and gray and the occasional slash of violent red. Oliver took his own measurements with the tape gripped in his teeth, only speaking to Rex when he needed to reference the man’s jacket.

Rex offered to measure, offered complementary fabrics, buttons pilfered from his own private stash. Oliver refused help at every turn, and Rex stopped trying. It worried him, that the kid stashed his work every time Rex drew near, but Oliver never missed a Sunday.

Halfway through the collar, he came in with a black eye and asked for a new needle. Rex handed him a pack. He even bought the kid a coffee, only to watch the coffee go cold as Oliver stitched in the corner of the shop.

Oliver modeled his half-sewn jacket in the bathroom mirror, hood pulled up. The hood wasn’t his only modification. He’d fit it slimmer, fewer pockets, and shark teeth sewn around the open hood from white fabric that had been a hospital sheet.

“Rex, you got a sewing machine, right?” He squinted hard out of the gaping mouth, head cocked like ‘do you feel lucky?’

Rex nodded. It was his first look at Oliver’s jacket, and the thing prickled his spine.

Oliver dropped the hood. “Can you put the lining in? It looks nicer machine stitched.”

Rex took the jacket and felt the weight of bad boyfriends and long illness. Three gunshots hung heavy on the ends of the sleeves. The work itself was beautiful, and it was stitched from the ugliest feelings Oliver could dig from the stacks of discarded clothes. The boy knew vibe.

“It’s mine,” said Oliver, with jaw set, daring Rex to take it away.

Rex walked home with the jacket stinking evil from his backpack. His coat was a work of terrible beauty, a warning to keep the world away. Oliver could get himself killed with a jacket like this. The vibes might scare away his bullies, but bigger evils are drawn to bad jackets. He didn’t need the weigh of bullets pulling him down.

The lining was already pinned. All he had to do was sew it. Rex positioned the jacket on his machine and startled at the sense of candy corn in the shiny black fabric spread across the shoulders. Oliver’s lining had been a Darth Vader cape. The coat was a mask.

Rex touched the outside of the coat again and laughed. The boy wanted his jacket scary, dripping with intimidation, but a Halloween scary that he could box up safely when the ghouls had gone away. 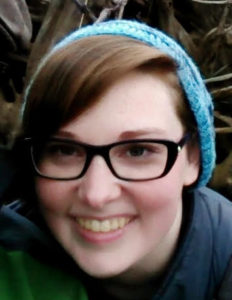 Megan Lee Beals lives in Tacoma, Washington with her husband and an ancient one-eyed cat. She works in a bookstore and collects hobbies like they’re Pokémon. At the moment she is knitting a sweater, cutting stencils, and rebuilding a 1970’s camper van with her husband. Her fiction has appeared in Cast of Wonders, Intergalactic Medicine Show, and The Toasted Cake podcast. You can find her and a variety of illustrations for her stories on Instagram @meganbeees, or at www.meganleebeals.com. 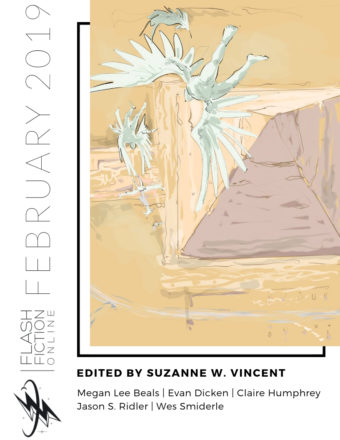