Jacob is searching for the word he lost: for the sound of it, the feel of syllables and consonants and vowels in his mouth, for the noise and tremble it made in his throat and inner ear as he spoke it long ago. The sparrow is watching him. It’s perched on the barbed wire fence, silent, clawed feet clutching rust and metal, black eye peering down, its small body a tousle of feathers and watchfulness. Jacob himself is only skin and bones, so much like the dead that he is no longer sure if he is alive or not.

Above, the morning sky is blue and thin and fragile like tissue paper, its sun-bleached vault high enough to fly beneath, but without the word, Jacob cannot reach it.

Once, he was free. He could speak the word and shed his skin, tawny feathers riffling in the breeze, beak and talons cleaving air and sunlight. And if he still had his word, if he still had the voice to speak it, he could leave all this behind: the bones lurking in the mud, the glint of teeth beneath the dirt, the taint of fumes and ash. But he’s lost his word and his voice. All he has is a number written on his arm. It won’t go away no matter how he rubs and washes. Sometimes he wonders if the ink and pain etched into his skin are what fetters him to the ground.

There is a path in front of Jacob. It leads away from the chimneys and the smoke and the ever-burning furnaces of the factory, the vats and hooks of the slaughterhouse. The path is gouged deep into the mire by booted feet and heavy tires, puddles glistening with reflected sky and remembered light. There is an open gate, too, but a man is standing in his way. Jacob can’t say when or how the man appeared, but he did. The world was empty, and then it wasn’t.

Jacob sees the man, sees the wheels and shafts moving behind his eyes. He’s seen these cogs and gears before, has seen them turning inside other men, other women, each one a part of the machine that has chewed up his world: devouring his mother, his father, and himself. Devouring his voice, too: grinding it into dust and silence.

“It’s Liberation Day, and look at you,” the man says. “Nowhere to go. Nothing to say. Just standing there, still dressed in your rags.”

When the man opens his mouth, Jacob can see the feeders and levers, the belts and rollers in his gullet, the cylinders and pistons in his gut, steel and iron always hungry, ready to consume and obliterate.

Jacob does not want to listen. He wants to remember his word. Wants to speak it. Wants to feel it unfold, feather-light, in his mouth, rustling softly as it escapes his lips.

Mother and father gave him the word, and no matter how weak and lacking his limbs might have been, no matter how slow and wandering his mind was, the word always set him free.

But mother and father are gone. Gutted and stripped of bodies and souls, voices and words. Their cleaned remains were fed to the machine: turned into ink on paper, ideology and graphs, bait and fertilizer, soap and lamp-shades.

His sister left so easily. Mina held her word close, never letting go, and spoke it right here, inside the barbed wire, beneath the chimneys. There was no room for wings or beaks, so he thought, but Mina stripped off her hair and face and bones and shook her wings out. No longer a hawk like she once had been, but grey-speckled, small, a sparrow slipping through the crumpled gray pulp of clouds and rain, leaving no flesh or blood for anyone to find.

He misses Mina. The way she helped him with his buttons and his shoelaces. The way she understood what he said, even when his words got tangled on tongue and teeth and second thoughts. The way she spoke his name to illuminate the dark.

The man’s fingers are sharp and angled like the teeth of cogs and gears. They reach out, snagging Jacob’s sleeve and wrist, grasping hold of his soul; dragging, ripping, tearing. Jacob’s soul is bared and stretched into the sunlight: a translucent scrap of doubt and grief and pain and joy and memory. To be devoured, to be remade, to be destroyed, to be turned into fuel, into grist, into grease to lubricate the machine: to keep it working, consuming the living and the dead alike, consuming every word, whether spoken or unspoken, chewing and digesting, spitting and shitting them out, until all that’s left is bones lurking in the mud, teeth glinting in the dirt.

On the fence, the sparrow’s grey-speckled wings flutter, but it still holds on to the wire.

There is a path, there is an open gate, but Jacob’s seen the truth of it, same as Mina did: the world is the machine, and the machine is the world.

The man tugs harder. Jacob’s soul is stretched to breaking, a filament of light, a fading glimmer of neurons and photons and plasma, and in this moment of agony and horror, Jacob screams. The scream is raw and clear, bright and sharp. It is not a scream of pain or fear. Rather: rejection, resistance, defiance. It is reverberating, revealing, releasing. Illuminating.

There is no word.

There is nothing but the word.

It is all there is. 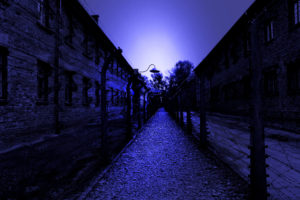 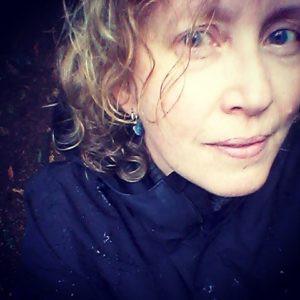 Maria Haskins is a Swedish-Canadian writer and translator. She writes
speculative fiction and currently lives just outside Vancouver with a
husband, two kids, a snake, several birds, and a very large black dog.
Her work has appeared previously in Flash Fiction online and also in Black
Static, Fireside, Beneath Ceaseless Skies, Mythic Delirium, Shimmer, Cast
of Wonders, and elsewhere. Find out more on her website, mariahaskins.com,
or follow her on Twitter, @mariahaskins. 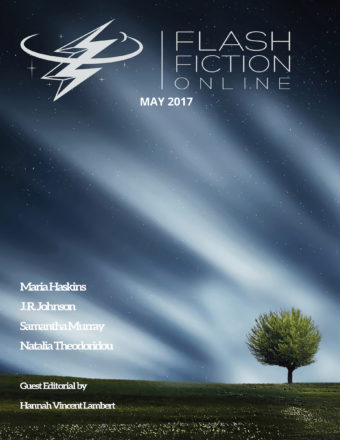