Your Hand in Mine, We’ll Be All Right 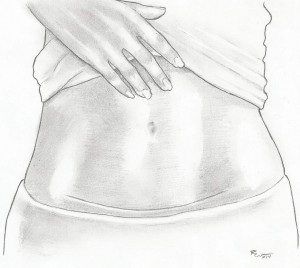 This is going to be very quick, because I can’t tell it slowly. Just imagine you’re holding onto my hands, okay? Keep my hands in yours so that they’re not doing anything else.

I had a baby in 2009. A little girl. I was going to do it the natural way, breathing techniques, nightmares about episiotomies, everything, that was what I was going to do. I had a midwife, even, because that’s the route I wanted to take.

A couple of weeks before my due date I started to get a bad feeling about the whole thing. The baby wasn’t moving right. I felt like I was leaking. I couldn’t get the idea of my baby dead or dying out of my head, so I bullied the midwife until she sent me to the hospital to get an ultrasound.

The ultrasound revealed that I had half the amount of amniotic fluid that I needed. The placenta was shutting down. I needed a C-section immediately. I remember calling into work and telling them I wouldn’t be back, that the routine checkup just turned into my maternity leave. It was a Wednesday.

C-sections are major abdominal surgery. They cut you open. It used to be that the surgeons would cut you lengthwise across your abdomen, right into the uterus, and pull your baby out that way, but it turns out that that’s sort of shit for your muscles. Now there are two cuts: one horizontally on your “bikini” line, which becomes important later, so just remember that spot, between the hipbones, above the bush of pubic hair, under the enormous pregnant belly so you can’t see a thing, that’s where the first cut is–and the second cut, into the uterus itself. Much safer, much less damaging, much more invisible.

Now here’s the part that bugs me. There are options for closing you up again, after the baby’s been removed. Medical science has come a long way. Somebody told me exactly how they would do it to me. Maybe it was surgical glue from the uterus all the way to the top. Maybe it was dissolvable sutures in the uterus, and then surgical glue at skin level. Maybe it was something totally different for the muscles. I don’t know. I didn’t know then, either. It bothered me.

The actual surgery part of this, the part that happened on Wednesday, isn’t important. I don’t care about the surgery. I didn’t get my perfect vaginal birth, whatever, it doesn’t matter. I also got my daughter, she didn’t die, that doesn’t matter either. Focus. Hold onto my hands, they’re twitching.

I’d never broken a bone before. Never been in an emergency room except to work there briefly when I did some EMT classes in high school. I was good at dissecting animals in school, though, fine with working with raw meat when I cooked. After my C-section there was a baby that was taken away to the nursery wing and there was me, in my hospital bed, with a plain white bandage between my hips.

I just wanted to see. They hadn’t let me watch the surgery. And I couldn’t remember what they said they’d close me up with. Maybe it was the drugs that made me think it was a good idea. But probably not. I can’t really back out of what I did that easily. I just wanted to look. I wanted to see.

Under my hospital gown I saw my stomach deflated for the first time. It looked swollen, pitted. I pressed my fingers against one side of my abdomen, slowly shoving. Something moved under my skin. I pushed it back, and went lower.

Under the bandage, there was no cut; just a large roll of skin and fat, what had once held and then discharged a baby, and then my bump of pubic bone. There was a bloody fingerprint beside my navel, the length of a thumb, that suggested there might ever have been a knife, but that was all.

I reached down and pulled back the roll of skin. I had to curl up on the bed to see. Under the skin, hidden away, there was a wide, white line, cut eight inches across, held together with little black stitches. Someone had cut me open there. Someone had cut me open, changed the insides of me, and then closed me up again. Who knew how well they’d done it, either. All I could see were these stitches.

I touched the edge of the cut, and then dug my nail a little between two of the stitches. The cut opened to my finger, showing the white fat under the skin. I rocked my fingertip back and forth, settling it lower, reaching.

The stitches weren’t in that firmly. My skin stretched more than I thought it would. I’d never felt anything so warm and comforting in my life. I’d gotten three fingers in and was checking my muscles by the time the nurses came in and found me.

My baby is older now. And I’m better. Have to be better than that, right?

Except it still bugs me that I don’t know how they sealed me up. If there are sutures that might come wriggling to the surface of my skin. If everything was put back into the right place.

But you’re holding my hands.

Katherine Crighton lives in Massachusetts with her wife, children, housemate, and hostas. To see more of her fiction, her mindset, or her mutterings, visit the writing blog she co-runs at The Anna Katherine Co-op of Evil, or get in contact with her directly via her Facebook page .

Congratulation to Katherine Crighton! "Your Hand in Mine, We'll Be All Right" was listed by Ellen Datlow as one of the best horror stories of 2014.

Will my hair ever go down?

This gave me a feelin of woobius

Intense! Made me anxious.

This story really turned my stomach.  After my C-section I was super sensitive about my "wound" as I called it, and I wouldn't look at it, let alone touch it, so the thought of... well lets just say that I was creeped out.  Well done Crighton.

I loved the way the narrator forces the reader to be part of the story.

Way creepy, Katherine. And I loved it!

Very realistic.  I've had three C-sections and your thoughts are sometimes a bit off the wall. This was very well written, I could feel myself there.

Excellent writing on this. The voice is excellent, very realistic. The ending was exceptional--the echo of the title in the beginning and the ending really made this story for me.  Having been through childbirth and a C-section, this story didn't seem that far from reality. :)

Deliciously horrible and disgusting.. a real prickle down your neck sort of story.