This is from the classic Flash Fiction Online site. Visit the current site for more flash! 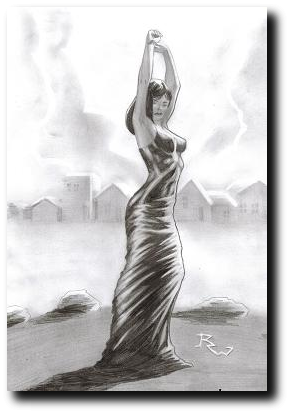 Every morning, the Human Clockwork arrived at the park promptly at 6:25. He’d set up his clock face behind his pedestal and then he’d arrange himself in front of it, and by 6:30 he’d have his arms just so, pointing straight at his feet. It was his duty to keep perfect time, and he never failed.

But this morning, there was a woman in his spot when he arrived at the park. He blinked at her, as if blinking would make her disappear, but no matter how quickly he blinked, she was still there. In his spot. Immovable. Impossible.

She was tall and slender, and her silvery dress poured past her hips and puddled around her ankles. She stood in the center of a large black circle, painted on a white square of fabric, weighted down with rocks at the corners. Little black marks divided the circle into twelve even segments, and her shadow hovered between the 6 and the 7.

The Human Clockwork checked his watch. Damn her, she was keeping good time. He narrowed his eyes.

But the Sundial Woman didn’t move. She was rock, she was metal, she was clockwork, ancient and infallible.

He felt the first twinge of desperation. “You can’t be here,” he said again, but she would not move.

He looked at his watch: 6:27. Damn her. He didn’t have the time to argue. He moved his pedestal and clock face to the other side of the path and set himself up. He was in place by 6:30, just barely, but it felt wrong. She was in his spot.

He was determined not to let her get the better of him. He was the Human Clockwork, the best in his field. She couldn’t come close to achieving what he would do today. Let her try to spend an entire day telling time perfectly! He knew what the park’s visitors wanted; she didn’t. She’d learn.

And so the Human Clockwork settled in for his day, slowly inching his arms around the clock face.

The Sundial Woman stood silently across the path from him, implacable and gleaming. Her shadow knifed across the circle.

As the sun grew stronger, the park began to fill with people, and they all clustered around the Sundial Woman.

“She’s so beautiful,” they murmured to each other as they admired her silent perfection.

The Human Clockwork couldn’t stand it. He began to hate the precision of her face, the clean lines of her body. His hands started to tremble — and he actually lost a minute.

The Human Clockwork! A minute slow! This had never happened before.

But no one saw him, no one noticed; they were all gazing raptly at the Sundial Woman. If a clock fails while no one is watching, has it still failed? He couldn’t bear the agony of his anonymity.

“She’s just a sundial!” the Human Clockwork called, but no one paid the slightest bit of attention to him, and his arms skittered past another minute.

The day wore on. The Human Clockwork’s donation hat remained empty, but the Sundial Woman’s overflowed. The whole long day, she didn’t move. She was granite, she was glass, she was clockwork.

The Human Clockwork grew crankier and crankier as time passed. He’d never had a day go this slowly. Usually he took a quiet joy in his work — but not today. She’d ruined it for him.

“Why are you doing this?” he asked her, in one of the lulls when no one was around them, but she didn’t answer. She was deep water, she was iron, she was clockwork.

In the afternoon, her shadow grew long and crept across the path towards him, and he began to know true despair. As the sunlight gave way to twilight, he became completely overshadowed by her.

“You win,” he said, and folded his arms in toward his weeping face. He stepped down off the pedestal and out from her shadow.

She hadn’t moved all day. As far as he could tell, she hadn’t even blinked. To stand like that, so perfectly still — was she even human? He peered at her more carefully, and thought he could see a vein pulsing at the base of her throat, her breast moving as she breathed, but he couldn’t be sure in the dim light. She was eternal. She was perfect.

“I love you,” he said, reduced to truth at last. “You have destroyed me with your perfection, but I cannot hate you simply because you have achieved what I cannot. I love you.”

The Sundial Woman did not reply.

The Human Clockwork wept harder at the futility of his love. “Please,” he said. “Please. Look at me. See me. Love me as I love you.”

Then the sun sank below the horizon.

The Sundial Woman blinked, and wriggled her timeless body to get the kinks out. Then she stretched her hand out to the Human Clockwork, and smiled. She was alabaster, she was time, she was love.

Beth Wodzinski promises to only use her army of evil robot monkeys in case of emergency. She’s the editor of Shimmer magazine; you may have seen her stories in Apex Digest, Fictitious Force, Quantum Muse, and other venerable publications. Irregular blog updates can be found at bethwodzinski.blogspot.com.

Copyright (c) Flash Fiction Online and the authors of the individual stories and articles.
All Rights Reserved.