Today’s post isn’t about writing. I promise.  So all of you non-writerly dear hearts can stop your screaming conga line toward the exits now.  Because today’s for you.

Because if you have a writer friend and you’ve smelled them after a hardcore round of gushing the imaginary voices onto the page, then you know that they usually smell like a pigsty rolled in fermented sewage and liberally doused in eau-de-rotted-bacon.

And if you don’t have a writer friend but you like to read, you might be of a friendly species that thinks it would be cool to adopt a writer friend. Or two.  Or three.  Heck, maybe even a whole writing group.

Now, I can’t speak for all writers.  Only the ones that I know.  And not really even for them because I can’t crawl up inside their heads like the little dude inside John Malkovich’s noggin.  But for argument’s sake, I’m going to generalize my uber-favorite writer friends.  They’re just plain cuckoo…and my world wouldn’t be the same without them.

A serious writer needs to be adopted by a non-writer.  Just to keep them on a general societal path of well being and overall health.

1.  The Hermit – This is the writer whose story comes to her either in dribbles and drabs or all at once, but when the pieces fall into place, she MUST write the story.  Right then.  The outside world ceases to exist while the Hermit hides away in the window seat of her apartment until she’s pounded out all 125,000 words of her novel.  She will be covered in angry, hungry cats.  Her poor body will be emaciated from a diet of nothing but Sweetarts and coffee for possibly days on ends.  She’ll emerge reeking of sweat, oily hair, and victory, a completed manuscript saved on her trusty laptop. 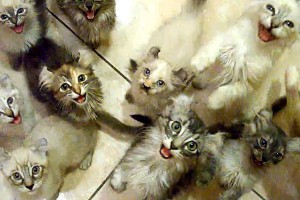 The Hermit needs your help.  A chamber pot is high on the list.  Or you can throw cedar shavings around her feet if she won’t lift her bum high enough for the pot.  Feeding the cats avoids the menacing way they’ll eyeball your juicy calves as you try to walk past them.  And a little dry shampoo rubbed into the Hermit’s hair can go a long way to preventing dreadlocks.  I recommend large stacks of granola bars and vats of peanut butter piled around her work station.  And of course, when she emerges with aforementioned completed manuscript, she’ll repay your friendship with a euphoria like you’ve never seen from your quiet, hardworking writer friend.

2.  The Parental – Ahh.. these are the equivalent of modern day D&D sojourners.  The Parental writer has to navigate a sticky swamp of dirty diapers, squalling toddlers, angry tweens, and household duties before he can settle down to write.   The Parental has mental guilt like you can’t imagine.  Those childhood years are floating by faster than the Mississippi during storm season but his novel isn’t going to be any longer than 1000 words unless he writes more than a sentence a day.   And by the time he does, he’s usually exhausted, all the creativity sucked out of him by planning dinner with his wife, telling bedtime stories, and remembering to take out the trash.

Parentals need a friend who understands that a day off from familial commitments doesn’t necessarily mean he wants a big day out with the guys.  He might want a few hours of solitude to hunt and peck on the keyboard.  And that doesn’t make him any less of a dude for turning

down the kegstands.  It makes him a Parental writer.  So unless you’re prepared to be the friend who sits guard outside the office door and combs doll hair while the Parental puts in ear plugs and writes his manifesto, you better help your Parental friend carve out time for himself.  Respect his time.   Encourage him to do what he loves.  Write.

3.  The NonBeliever – Okay, so this is probably all writers.  Except maybe the Stephen King and JK Rowling.  They’re pretty sure they’ve made it.  But as for the rest of us, we’re convinced on a daily basis that we don’t have what it takes.  We’re constantly bombarded with dozens, hundreds, maybe even thousands of rejection notes before we get a single “yes” from a publisher.  Some writers go years without a “yes”.   So when the NonBeliever tells you she’s thinking of giving up, she’s just gotten another one of those pesky rejection letters.  Those things are a dime a dozen in this business.

So maybe that’s stretching the literal truth a teensy bit but, shhhh, you’re a friend.  Tell her anyway.

4.  The Introvert’s Introvert – My favorite thing about being in a group of writers is the first time anyone tries to gather them into a circle.  They all shuffle around, usually making as little eye contact as possible, and invariable fall silent, with most of the group staring at their shoes.

Introverts are my favorite people.  Introverts rock.  They live inside their heads.  Their heads are crazy, amazing places so filled with color and life and ideas that they often have a hard time translating that to the outside.  So put them in a group and ask them to small talk?

Your Introvert will often need you to be that safe person to go with him into the extroverted chaos that is the majority of our world.  Book signings, conventions, networking opportunities, heck… even meeting a new group of writers at the local coffee shop can sometimes be daunting.  So be that person.  Go along for the ride. Respect that the Introvert may not be comfortable in the same situations you are.  Or he might want to vent one-on-one in a way he might not be comfortable opening up in in a group.

Writers are like anyone else.  Perhaps a tad more eccentric.  We do hear voices in our head.  We plot murder and dispose of the bodies.  We make love to strangers in our mind.  We live a thousand different lives, speak in a hundred accents, and make up magical worlds.

But we couldn’t do it without the people in our lives who give us strength.

So go out and adopt an author today!

Congratulations to the 2021 Nebula Award Finalists

‹ Haven’t I Met You Before? › Micro-Fiction – Writing the Short Short Story