AITA for Using My Side Hustle to Help My Boyfriend Escape the Clutches of Death? Aimee Picchi

Posted by u/DeathBecomesHer one week ago

I (29F) have a side hustle, selling a 100% herbal restorative that I operate through word of mouth. I ONLY accept pets — despairing owners bring ailing Mittens or Rover to my backdoor when traditional veterinary science can do no more, and one thousand dollars and a dose later, the pet is as good as new.

Anyway, I often experiment to improve the restorative. I left one of these experiments on the counter instead of my basement lab, and my BF (30M) apparently believed it was a craft cocktail. I found him sprawled on the floor with the bottle clutched in his hand. For some context, I’m totally in love with this guy — he’s kind, funny and chill. We met at our jobs at a biofuels company, and we share the same values: green energy, composting, and organics all the way.

I poured a triple dose of my tried-and-true restorative down his throat, and BOOM! He was alive again (and by alive, I mean “undead”) within a minute. But afterward he wasn’t chill or funny. He said I was an asshole for performing “necromancy” on him without his permission. I explained it’s science, not magic, but he said that wasn’t the point. He said he needs space and is moving out, and all our friends took his side.

Am I the asshole because I didn’t leave him to die?

EDIT: I forgot to mention “as good as new” means the pets are reanimated. Some may experience personality changes after returning from the edge of death. They also don’t need to eat or drink (because they are technically undead, their biological functions shut down. But as I tell my clients, the upside is no vet, pet food or kitty litter expenses!)

EDIT: BTW, my boyfriend and I had discussed end of life measures — he often installed solar panels on rooftops, and there’s a high accident rate. He told me to try whatever I could to save him. It wasn’t as if I didn’t have justification for giving him the restorative!

EDIT: Some of you have asked how my boyfriend is now. He’s fine, I guess, as far as I know. He texted me he sees the world differently as an undead person. Humans consume too much, he says, and he believes the answer to climate change is to use my restorative to turn humanity undead.

YTA. You revived my Bartlett and took my money. I’ve tried getting in touch for a refund. Bartlett sits at the back window, staring as if waiting for someone. A new owner? Death? Who knows? He doesn’t eat, doesn’t fetch. Just mopes. Your customer service sucks and your BF is right: You’re the asshole.

OP here. I remember you and Bartlett and wow, I really thought you’d be more thankful. When I warned my restorative could change a pet’s personality, you complained he was hyperactive before. And I said there are no refunds!

You’re the asshole. Plus, your boyfriend has a lot of good points, as a totally objective reader of this thread. The undead are carbon neutral. Not that I’m undead or anything. Or your boyfriend. 100% human, non-boyfriend here.

Everyone sucks here. Your boyfriend drank something without asking what it was and is now advocating the end of humanity. BTW, I’m getting online ads for a group called Ahead with the Undead promoting some sort of “post-life” future. Is this related to your boyfriend? It looks kind of interesting, actually.

UPDATE: OP here. A little bit of a twist since my last update. My boyfriend (now my ex-boyfriend) stole my restorative. He also convinced some social media influencers to try the “post-death” challenge of taking the restorative — it transforms healthy people into the undead in one dose! (I’d never tried it on healthy animals or people, so this came as a surprise.) To answer ObviousAnsrs, yes, they are running Facebook ads about humanity’s harm to the planet. (I mean — true, but surely turning everyone into the undead isn’t the solution?!)

There are reports of undead gangs roaming the streets and proselytizing the undead lifestyle. If you encounter these groups, do not engage.

Maybe your ex-boyfriend would forgive you if you joined him in his new post-life mission.

Please contact your local FBI office, DeathBecomesHer. Whatever you do, do not get back in contact with your boyfriend.

UPDATE: I don’t want to be the asshole who unleashed an undead revolution. So I decided to swipe back my restorative. (Okay, I’m not proud I jimmied the door to my ex-boyfriend’s new apartment, but the end justifies the means.)When I snatched the restorative from his kitchen, I noticed there was no power in his apartment. Basically, he had zero energy consumption! As I was marvelling over that, my ex returned. It was awkward AF but I was relieved he was doing okay. Not the same, of course — he’s totally serious now. He mentioned his carbon footprint is now zero. Look, I know I shouldn’t focus on that, but … I mean, I can’t not think about it. Anyway, I left with the restorative hidden in my tote bag, so clearly I’m not the asshole, right?

Please remain at your home. Federal agents will be there soon to escort you and your restorative to safety.

UPDATE: You’ll all be glad to hear I had a heart-to-heart with my boyfriend (no longer my ex-boyfriend!). I can see now I was a little bit of an asshole. My sin: Loving too much! It turns out I can give up life, but not him. If you want to follow our undead carbon-neutral lifestyle — and snaps of our sweet doggo Bartlett — check out our blog: AheadWithTheUndead.com. 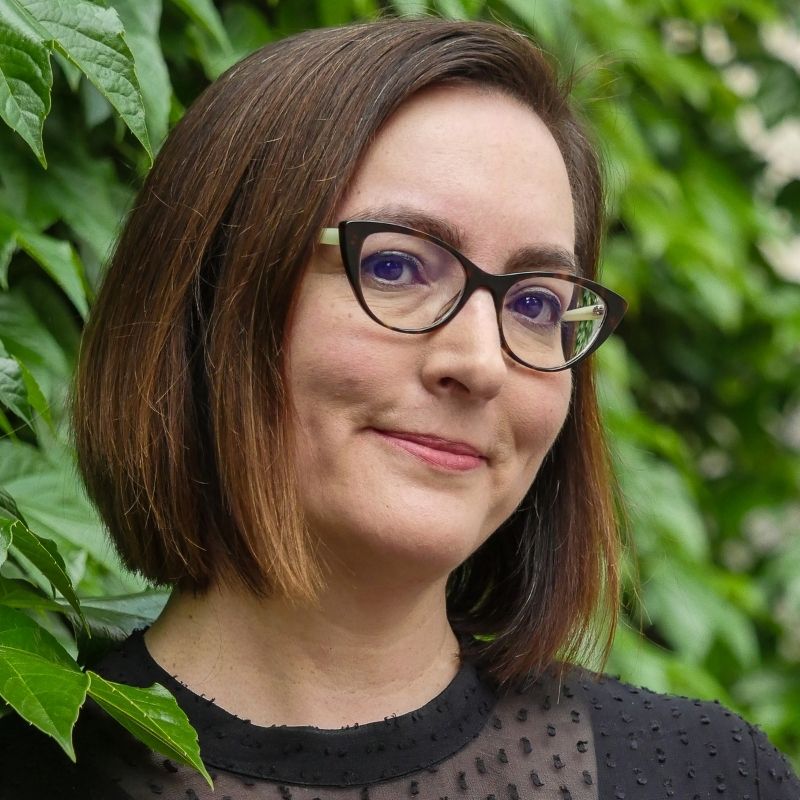 Aimee Picchi is a journalist by day and science-fiction and fantasy writer by night. Her short fiction has been published in Podcastle, Fireside Magazine, Flash Fiction Online, and Daily Science Fiction, among other fine publications. In 2021, her short story “Advanced Word Problems in Portal Math” was a finalist for the Nebula award. She’s a graduate of Viable Paradise and a former classical musician. She lives in Burlington, Vermont with her family. You can find her online at aimeepicchi.com or on Twitter at @aimeepicchi.