And she’d say Liam get up and tell your fucking son he can’t ride that goddam bike he’s gonna turn it over. His own goddam fault if he turns that fucking thing over. And now there was one less person in the house but that bike still sat out on the driveway, collecting dust. She felt like she was collecting dust herself. The dog had died and the cat was so old he had stopped preening himself and now just sat on his chair with matted black fur. And that old horse Caspar was so old his back hung down and his stomach just about touched the ground.

She remembered reaching a point when she knew what her life was gonna be and felt like she could guess just about enough what each day would be like. And she didn’t like thinking about it but she especially felt that way nowadays. In the past, when she was feeling that way especially bad she would think about what Eddie’s life was gonna be and what kind of girl he was gonna marry. Because he really was such a sweetheart and that girl Marcy was so sweet and maybe if he had gotten her pregnant would he have gotten on that bike?

Yeah. He would have. He liked to run yellows and now she liked to wish that he had been running a yellow and had gotten cut in half by a truck coming the other way. Because then she’d be able to wonder what would have happened if he hadn’t run that yellow or if he’d been going a little slower or a little faster and that truck cut someone else in half instead. But there was no point wondering about what had happened and what his body looked like. She knew it already. There was no other car and no other person and it wouldn’t have mattered if he’d been going a little slower or a little faster or whether or not he was running a yellow. He turned his bike over drunk as shit going 85 and his body looked like, well, like it’d been thrown off a bike going 85. His own goddam fault he turned that fucking thing over.

And now she just watched her TV shows and thought about what each character’s life was gonna be. She liked watching the children’s beauty pageants and Liam would say goddamit why are you watching that junk again so she’d wait until he went out for his cigarettes and then flip the channel back because oh the girls were so lovely and just so sweet and what were their lives gonna be like? But she knew what the rest of her days would look like and the rest of Liam’s days and the cat and Caspar didn’t have many more days to be like anything. All because he turned over that goddamit fucking bike and goddamit Eddie why’d you have to turn over that fucking bike goddamit? 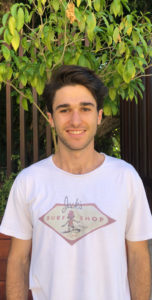 Elliott Thornton is a junior at Harvard concentrating in English. Born in London, he now lives in Florida. He spent the majority of his teenage years competing on the junior international tennis circuit and began writing in his free time while traveling. This story came out of a conversation overheard in a diner.