AW: This story stayed top of mind for me during Black History Month as it tackles the theme of inclusivity and made me think about how we can use story craft to create empathy for real-world issues, such as moving humanity from the tendency toward “othering” to reframe our thoughts toward “belonging.”

At first read, this story comes across as light-hearted, almost tongue in cheek. But there is truly a darker truth here. Where did the inspiration for this story come from?

JB: A lot of my flash stories get generated because of my participation in CodexWriters.com contests.

For anyone unfamiliar with Codex, here is the description from the website:
Codex is a writers’ group for neo-pro writers interested in speculative fiction (Fantasy, Science Fiction, Alternate History, etc.). Neo-pros, for our purposes, are writers who’ve had at least one professional publication and/or participated in one of the top, by-audition-only workshops and/or been offered representation by an established agent, but who have not yet sold a great many stories or a number of books.

JB: They annually have at least two flash-only contests between willing neo-pros, to the point now I’m not sure if “Settling Beef” was one of them but I’m betting that it was.  I do recall that the initial imagery was largely inspired from a Chic-fil-a commercial where there was a cow in a blonde wig.  Please don’t tell me I’m the only one that remembers that commercial!  Since I pulled ideas from the fast-food industry for the story, I also decided to include my own personal fast-food work history in the main character’s biography because it was relevant to the story.

AW: There must have been a seed that got planted by a specific incident or conversation? or maybe more than one? What thought processes went into setting the story up the way that you did, from the bolo tie-wearing manager to the cow-like species name?

JB: Now I remember! The initial idea for this story came out of a Codex contest, specifically the 2015 Flash Savior of the Universe (where we write three rounds of flash stories based on prompts).  There were two prompts in the first round that I gravitated to.  They were:

1) Write a story about an unusual article of clothing. Who owns it?  Why do they wear it (or not wear it)?

These prompts have a way of hitting right up against the little nuggets that get lodged in my head, like the Chic-fil-a commercial.  Writers often use the term “spark” when it comes to inspiration because it’s about as close as one can come to describing the feeling when these two random elements strike against one another and the story just blooms out of it, like a fire starting from striking flint on rock.
As far as the bolo-tie-wearing ambassador, I just find that kind of Archie Bunker archetype language to be funny, especially if the situation is used to laugh at the person using it and to make him eat crow at the end.

AW: Has anyone ever actually asked if you were the diversity hire? I love that you included this in the story because I know there have been times in moments of insecurity that I’ve asked myself if a particular co-worker might be thinking I am a diversity hire…and I know there will be folks who read this who have considered this question of their co-workers as well. LOL

JB: I haven’t been asked if I was a diversity hire directly… I’m not sure many people would get asked that in today’s era because the threat of an HR violation looms like an ever-present cloud to squelch the pompousness of jack-assery for most people who are not jackass enough to go ahead and ask.  But, like you, I’ve been in positions to think it… to wonder if this is even why I was chosen or why I was there.  That no matter how qualified I was, the real reason might be to check a box to get some kudos.

AW: I’m a huge fan of Star Trek and your story made me think of the “Prime Directive” and how they try their level best to not interfere with other species’ development timelines at first contact. Short of humanity actually facing our first contact with an alien species, what do you believe it will take for all of humanity to become an inclusive group, where everyone feels a sense of community and belonging?

JB: I’d have to say the transition from capitalism to democratized enterprises (i.e. worker cooperatives) would help in that regard.  Perhaps that seems like a totally unrelated answer, but we spend a lot of time doing what we are told to do, things we may not want to do, as ordered by managers who are directed from the top down.  Most of us can’t imagine working in a place where we have a vote about what we produce, where we produce it, how much we get paid from the profits, all these things.  There’s a real sense of community that evolves in having a say in your own destiny, much more than “mission statements” and “company ethos”.  You probably wouldn’t vote to move your own job overseas or dump toxic waste in your own backyard.  But since you don’t have a say in that now, and things like this happen because people at the top don’t mind eating off the failure and misfortune of others, there’s someone to blame… so people blame the left politicians or the right politicians or Muslims or the Chinese or the Russians, etc., etc.  I’m not saying democratized enterprise would solve the entire problem of inclusivity throughout humanity, but it would make our immediate circle of community bigger, much bigger, and that sense of community is the vital seed needed for inclusiveness to not be a half-hearted, unfelt gesture.

AW: What kinds of questions could we use in stories (using tools like dialogue, etc) to interrogate:

2) how humans can learn to just “be kind” or in the words of Bill and Ted, “Be excellent to each other”?

JB: There may be regions of the world or eras of history an individual may be wholly unfamiliar with, so someone may not know what the Chinese are doing with the Uighur population or what the Turks did to the Armenians, but for the society in which you live I’m of the mind that people already know how people within that society have felt othered.  They don’t care… and they continue to affect a willful ignorance because they don’t want to know more, acknowledge the problem and change their craptastic mindset.  One of the things I strive for is to put those people who are willfully ignorant into the position of the “other”.  There was a bit of that here, where at first, we’re laughing at cows in wigs then we’re on the defensive because they are wearing our harvested scalps from war dead.

AW: What questions did I not ask that you would like to answer about the larger theme of this story, or your writing process?

JB: If you enjoyed this story, you should totally get my book Pendulum Heroes, which has that same bit of fun, bit of dark, bit of driving optimism and a whole lot of action.  Besides that, it’d be nice to not have to work in this undemocratic institution in which I now work, which is only going to happen for me through book sales.  It’s a nice dream. 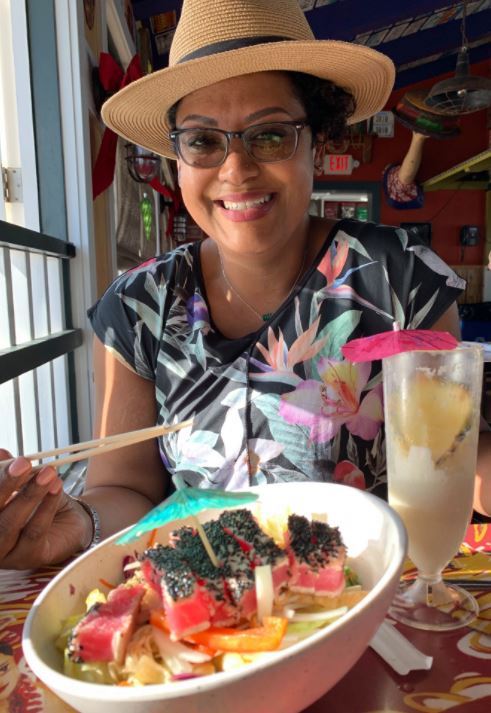 Audrey T. Williams has lived in the San Francisco Bay Area since 2010 and earned her MFA in Creative Writing from California College of the Arts in 2018. She is a Voices of our Nation (VONA) alum, a SFWA member, and Co-Founder of AncestralFutures.org, a BIPOC+ speculative literary arts & education nonprofit. Her poetry has been published in Space & Time Magazine and other venues. She is a first reader for Fantasy and Science Fiction Magazine and an occasional nonfiction contributor to Lightspeed and Flash Fiction Online. Connect on twitter: @ancestrlfutures and instagram: @audthentic_stories & @ancestralfuturespress.