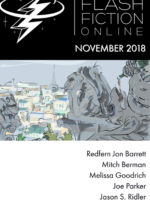 You have been working in this field for nineteen years, and you must be cautious of the distance between improvement, competency, and conservatism. You notice this most when you hear the advice that hums like the highway in writer groups and chats. When you find comfort in being told things you hold to be true… even when they are horseshit.

Beware advice that feeds your worst attributes, the advice that sounds easy and seductive and doesn’t stand up to scrutiny: that revisions are for idiots and the best draft is the first draft; that giant word counts reflect giant talent; that something you spent ten years on is better than a story created quickly; that all art is subjective and thus you cannot train yourself to improve within your craft; that chance alone explains things.

Have you seen that in other arts? It’s bullshit. Training, joyous or grind, makes better sculptures, dancers, comic book splash-page visual mavens. No one would say study would make a bad actor. And all arts are in some fashion a combination of reckless abandon and considered polish. Each artist travels between these poles at their own speed.

We are all prey to listening to advice that soothes. In the arts, it’s rooted in desperation, poor odds, bad money, and big dreams. And depending on where we are, the seductions come in new guises. And soon, they become excuses to not consider changing how you make art.

And the problem? Sometimes sticking to what you’re doing is the best thing. But for others, it’s a recipe for mediocrity.

Someone once told you that every work has its own method. Yes, yes, some generalities endure, but every work is its own experiment, built out of the others but still unique. You have chosen to balance yourself between keeping your competency and trying to improve in antic ways. This, you think, will lead to the next stage of your craft.

And no one really talks about that, do they? The moment where you have to shake up what you’re doing, knowing your skill set for the new is not as sharp as the old. There is risk. You may not write with the same facility as you did, but without this test you will never get better.

There are sirens (mostly dude sirens) who say to just do the same thing over and over and improvement will happen de facto from production. This is true, until it’s not, and the only judge that matters is yourself.

And if you lie to yourself, your art will suffer. At least to you.

So avoid the Siren Dudes.

Improve. Let the mistakes be the scars of battle that teach you new things, instead of just doing the same-old same-old and hope the world will notice. Be bolder. As Steve Martin said, “Be so good they can’t ignore you.”

And if they do? You’re still better off than when all you did was all you knew and never stepped outside of your comfort zone. And you’ll be even more accurate when you take the next shot and kill the Siren Dudes.