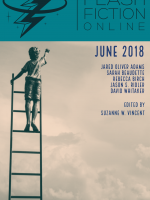 When not writing the Brimstone Files, preparing for the debut of Mavericks of War, or teaching six classes at various schools, institutions, and search engines, I’m an improv actor. Which means in exchange for stage time, I perform completely improvised theater that is mostly comedic but often dramatic and weird to an audience of primarily improv students. Kinda like writing short stories: creators are the main consumers, at least where I am. Yes, “careers” in improv exist, but most of us do it for the loves. Very few people not running theaters make improv their dayjob.

Don’t Think Twice is a great film about improv, ego, and sadness written and directed by Mike Birbiglia, an improv, sketch, stand-up, and storytelling machine who has done some great specials, features, and who also works as a contributor to This American Life. Thanks to a talented friend’s efforts, I saw a sneak-peak early-release of this film at a jam-packed theater in San Francisco in 2016. This was back when I was used to performing every weekend, seeing shows every weekend I wasn’t performing, taking workshops, and scheming new programming. Improv was my main joy.

DTT follows six improvisers as they search for meaning in art and life. When their theater closes down, they have to reassess their commitment to their craft. Chris Gethard’s character fears what this means for his identity. He works a shit job at a grocery store, being treated like garbage each day, but what makes it bearable is this: “I go on stage. I kill. I crush. I’m a superhero. Without improv, I’m kind of just a loser.”

In the theater after this revelation, the silence was frigid. I looked around at stunned faces and almost died laughing, with my final words being, “It’s true! It’s all true! We are such a bunch of losers!” Thankfully a friend shook her head before my yap opened. Decorum prevailed.

I find myself torn over such sentiments. Being an artist is great. Writing novels, history, and doing improv brings me joy. I love the process and product of these arts. And that my CV looks like a jigsaw puzzle.

But there were times when I could do no writing. No history. Now, improv is starting to slide away from dedicated focus. When their candles dim, does the loser emerge from the shadow? Who tells you that you are a loser? In my case, it’s me. Because, honestly? The rest of the world doesn’t give a shit if I live or die. Spending time on the metrics of loserhood for other peoples is a sport best left in high school. Or at TMZ.

Having to return to more dedicated dayjob stuff makes me realize that this issue of superpowers is, go figure, simplistic, reductionism, and ultimately harmful. Yet, by using the Gethard Equation, might I suggest teaching is my superpower. Not improv. Not fiction. Not history. Yet these are the superpowers of artist. Or so the equation goes.

I’ve heard a lot of great things about me as a teacher (loser). I’ve spent most of my professional life making educational products, creating courses, and teaching (loser). I say this having an individual income just double that of the Federal Poverty Level for one person (though that’s changing, thanks to TEACHING and other things… loser). I’ve taught commanders of armed forces, leaders in tech, and kids. And I’ve done it just about as long as I’ve been writing fiction and history. Here, I am crushing it (… loser). Without teaching, I’d be… a loser who could not afford improv classes, or a home to write fiction, or the time and expense of historical research…

Which reminds me of a colleague’s notes that the voices of the poor are silenced in the arts, making much of pop culture the dreams of those who think they are middle class but are really the new lower class.

But in the world of superheroes, if fame and excellence as an artist makes you Superman, recognition as a teacher makes you… Cypher, a mutant hero who was great with languages… a skill that can change lives but can’t stop bullets.

In the film, I would be Birbiglia’s character Myles, who pines for celebrity but is best at teaching prodigies who become celebrities. The failure of his improv superpower to turn him into a star makes him bitter. Indeed, teaching is considered the job of failures, like driving a cab or waiting tables. Working class and lower middle class shit jobs played for laughs. In real life these are things you endure because your dreams failed.

And this is where superhero analogies become horrific. And why this film is great.

The other side of the Gethard Equation is this rule: your superpower relates to scarcity and success. Keegan Michael Key plays the one member who reaches for the brass ring (a SNL-type show) and gets it. His superpower goes nova and he leaves the group, causing a shit storm since he can’t take the losers with him. There’s only room for him (or so it seems: watch the fucking movie, okay?). The rest try in various ways to get on the show. Most fail. And all realize something.

That improv superpower? On its own? It may make them special, but alone it won’t make them happy. They have to try new things. There has to be more than a Friday night show and dreams that won’t come true. Some go into comics. Some become parents. Others try out teaching. And one owns a theater. And they all keep doing improv. Not because it leads to fame and glory. Because they love it and each other. That’s it.

Not being a slave to binaries? Even if your identity only thinks it’s special because of one fucking thing?

Help This Ridler maintain the rent on his Fortress of Solitude by buying HEX-RATED! MAVERICKS OF WAR! or FXXK WRITING: A GUIDE FOR FRUSTRATED ARTISTS TODAY!!!

Jason S. Ridler is a writer, historian, and actor. He is the author of The Brimstone Files, and his latest historical work Mavericks of War was called a “visceral read that is also an important piece of scholarship” by Pulitzer-Prize winner Richard Rhodes. He is a Teaching Fellow at Johns Hopkins University and teaches creative writing at Google, Youtube, and for private clients.