I sat groovin’ in the last shreds of The Big Easy’s Armstrong Park, blowing my sax, using the Big Buzz to keep perfect time. That’s the one advantage of the buzz, keeping time to the microsecond if you’re willing to jive to multiples of 37.19 beats a minute. If you weren’t, well, tough shit. Think spittin’ in the wind is hard? Try drowning out the cosmic metronome. Try playing offbeat to the Earth’s only beat. Ain’t happening.

Not since nine years ago, anyway. Not since everyone started hearing a hornet in their head. Just a little buzz first, a lone hornet. But it grew. Folks panicked. TV guys bullshitted about a “previously unknown natural phenomenon.” A rock with some crazy-ass structure, spitting waves direct into our brains. They thought it’d fly on by; the buzzing would stop. Bullshit again! Damn thing got caught in L4—a gravitational tar pit—followed Earth around like a rabid puppy. By then? Whole hive in everyone’s head 24/7—can’t hear nothin’. Riots. Suicides. Chaos.

Alphamax walked by, jerked to a stop, flailing his dreadlocks around like bowling pins swirling on a monster strike. I ran up a beauty of a scale for him, caressing the sax like it was my best lover, and in theory it hit those sweet high crying notes everyone used to love, brought people to their feet.

{Why bother, Gator?} Alphamax signed. He always clipped off his signs with his big supple piano hands, obnoxious bastard. Slickest keyboard man around, when that mattered.

I stopped playing to sign my reply. {Keeping in practice, brother. Someday—}

Alphamax sneered. {False hope makes me sick.} He flipped me a curse and stomped off.

Alphamax got no hope. But you gotta have hope in this life or you got nothin’.

Kept practicing, improvising on a theme, thinking back on the soundful days when I slayed ’em in the top shelf Jazz clubs—New York, Memphis, and right here in New Orleans. I even done studio work on a big pop hit, “Lame Static,” by that punk group Slack Knuckle. They craved a retro sax solo, and who am I to refuse coin of the realm? The song was shit, and even my sublime riffs couldn’t change that, but the royalty checks—hot mamma!—sweet and kept coming. Right up to nine years ago. Right up to then.

Gettin’ dark. I packed up the sax and slung the strap around my shoulder, headed back to the public digs to scrounge some potatoes for dinner.

Saw a crowd to my left, a dozen people leaning over, all ages, all colors. Something in me shouted over the buzzing in my brain, “Check this out, Gator.”

Some too-thin dude in his twenties, purple hair, no shirt, had set up sheet metal, piece of a huge highway sign, LA-4, about fifteen by fifteen feet, laid out on top of sets of old tires stacked two-high. Dude had welded thick circular strike-plates on the edge in front of him, like a drumkit, each one a different size. He wielded two claw hammers and he wailed on the plates, sending his beats rippling through the sign. Dude knew what he was doing, laid it righteous. People leaned over, put their hands on the metal—they could feel it. Feel his beat. They smiled, mouths opening and closing, tapping their feet to what the dude offered there fast and thick.

I ran up to the metal, found an empty spot, put my hands on. Dude powered through a routine, slick, polished, knew what from what, a paradiddle, then a roll, then god knows which else. He used the big buzz. Used it as a backdrop, played to it, surrounded it with his style, forced it to play to him.

Music. Real music. All percussion, yeah, but music. Buzz couldn’t defeat it. You didn’t need to hear it, just feel it in your hands, let it soak through your bones. I laughed, chest heaving, mouth half open.

Inspired, I stepped back, opened my case, stuck the mouthpiece back in my sax. Now what?

I kicked off my loafers and jumped up on the highway sign. People smiled and pointed. I felt the rhythm lick my feet and grooved my hips to it, using what the dude just kept laying down like river rapids of time and tempo.

I blew my sax, improvising on top of the dude, working with what he offered up, what he used to surround the big buzz and tame it. I weaved my lines in and out, followed his lead, matched him, plowing out ahead in double time, then easin’ it all back home. I knew how my notes sounded in my head—beautiful.

The beat stopped in a slap. I looked around. The crowd: heads cocked, wincing, looking at each other, confused. A bunch of them signing smack at me:

Hammer dude: {Get off. You’re snuffing my boom boom.}

I stepped down, slipped into my shoes, grabbed my case, slithered away.

They said the thing might leave L4 someday, some big rock might fly by and pull it loose. They said it could be tomorrow or a hundred years or a thousand. They said someday we might even build rockets again, send one up and nuke its ass.

Someday, the big buzz would stop. Someday, people would hear again. And everyone would hear my sax. And stand up and cheer. And love me again. 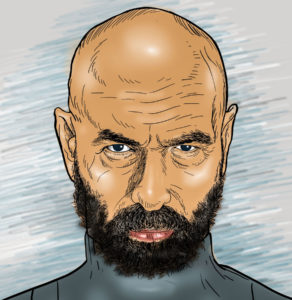 Peter S. Drang builds 3D printed robots by day and writes fiction by night. In prior lives, he’s been a high level software engineer, an entrepreneur who helped launch the ebook industry, and an AP Physics teacher whose diabolical labs scarred many young minds for life. He has previously published several stories in places like Challenging Destiny Magazine and has several nonfiction credits as well, including an 850 page tome about an obscure programming language. He lives in New Jersey with his wife and has two grown sons making their own marks on the world. Like millions of other people, he has severe tinnitus, and that was one inspiration for “Gator and the Big Buzz.” You can find his blog at drangstories.com.