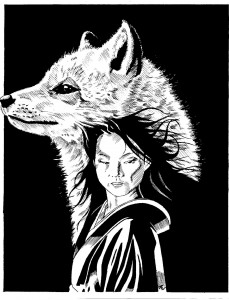 I found the painting in the basement in a Japanese tansu. Noriko had moved in a lot of antique furniture when we got married, primarily from the late Edo period, and I had lost track of most of it. The painting itself was buried underneath a stack of clothing and wrapped in old brown paper. I wouldn’t have even known to look for something solid had the chest not made a large thunk when rolled out of the corner.

It was a beautiful painting, full of deep, rich, earth tones and free from any significant deposits of dust and grime. Through the wooden frame a parade of foxes dressed in fancy, patterned kimonos carried lanterns in a procession up a mountainside. They looked as though they were celebrating something important.

Above me, I heard the sound of a door being opened and shut quickly. An umbrella being closed. The quick clack of her shoes lasted only a second before she was padding across the floor in bare feet. By the time I reached the top of the stairs, I could follow the sound of her gentle singing to the back bedroom that we were slowly turning into a nursery. She was folding some onesies on the new changing table, already out of her work clothes and in a flowery maternity dress.

“Presents from a client?” She nodded ruefully, and smirked just a little. Something funny had probably happened. She would share in a few days. The conversation would begin with “you know a funny thing happened at the office, the other day, ” then she would spin a fanciful yarn, and it would be perfect in every way.

“Hey, I found this in the basement.” I had held the painting under my arm, and now I turned it to show her. “I thought it might look nice in here.” Her face, already fair, went stark white. The pregnant glow fell from her skin, and she all but ripped it from my hands and held it to her chest.

“Where did you find this?”

“In the rolling trunk in the basement.”

“No, you need to put this back. Right away, and just move that thing back into the corner.” I moved toward her a little, and she stepped back half a step.

“Nori? What’s up? What’s it a painting of? Is it, like, a bad omen?” Japanese bad been hard to adjust to. Noriko had been in the country since she was five, but her family had fought assimilation tooth and nail.

“A fox bridal procession. When it rains but the sun is still out, that’s when the foxes have their wedding.”

“Nothing, just put it back.” She shoved the painting into my hands. “Just, please.”

“Honey, you’re kind of freaking me out.” I stepped toward her again, but she evaded to the side.

“I’m…going to get the mail.” She made for the front door, faster than I had seen her move in awhile. No shoes, but she grabbed her umbrella and was gone.

I made my way back down to the basement. I had left the brown paper open on top of the trunk and turned the painting over to figure out how to rewrap it. There was crisp calligraphy in the bottom right corner of the frame painted with a fine brush and silver metallic paint. I recognized the kanji for “Tachibana,” Noriko’s maiden name. Then there was the one for “marriage,” one of the few other characters I had picked up. Then there were a bunch I didn’t recognize at all followed by a date from the 1850’s in English numbers. I turned it back over for a second look. This painting was old, then, older than I expected from how good a condition it was in. I wondered, then, if the clothes I had found with the painting were equally antique.

I opened the big drawer again and pulled out the piece on top. A tiny silk kimono with orange flowers bursting on pale green. In my head I saw an image of our future little girl draping the fabric around her, of mama wrapping the obi around her thin waist and tying the otaiko on the back just so, of obaachan’s impossibly deft hands retying it “properly” as a grandmother does, of a wooden box containing a hair pick passed down through the generations, of the love that these traditions would pour upon her. I laid the kimono out across the top of the trunk next to the painting, and something caught my eye. The pattern on the kimono of the third fox was orange flowers blooming on a pale green background.

The realization that she hadn’t come back yet washed over me before anything significant about this observation clicked into place. I had been down there awhile with complete silence upstairs. I worried she had slipped on the wet pavement and immediately panicked. I hurried up the stairs and opened the front door to the gentle rain shower. There was no Noriko, though, not anywhere. The umbrella was at the end of the driveway, laying on its side but otherwise intact. I called her name. Nothing. I wandered out onto the pavement and down the sidewalk a block to the small park that backed up to the woods edging the neighborhood. In the grass was her dress, crumpled in a heap. But, still, she was nowhere to be seen. I fell down onto the grass. Something felt wrong around me, like a heavy weight had dropped into my chest. I flopped down onto my back and stared up into the rain. The sun was shining again, but the rain continued on, ever so lightly pattering the sidewalk, just like it had the day of our wedding.

Ashe Thurman is a technical illustrator, graphic artist, and occasional costume designer who would much rather be a full time novelist. She’s had nonfiction published in the MENSA bulletin as well as research and scientific essays, but this is her first major fiction publication. You can find her at asheetc.worpress.com breaking down life into bite-sized chunks. She lives in Austin, Texas with her husband and her sword collection.