I’m not exactly sure what Larry does.

I’ve worked in this office building eight years now and haven’t figured it out. Larry was here when I started and he still appears. Not all the time. Not every day. Sometimes I’ll go a week without seeing him. But he always pops back up. By the coffee maker usually, putting something that’s not coffee grounds in. I mean, they’re black, sure, but they don’t smell like coffee. They smell like dirt.

I bring my own coffee into work now.

Anyway. No one else seems to know either. Or, they do but they’re not telling me. Or, they think they know but they don’t. I asked Stacy what Larry did and she said, “Oh, Larry? He’s in management. You know.”

I didn’t know, but Stacy was already talking about the next report she needed to turn in, so I let it slide. Management. I couldn’t really dispute it—I have no idea what management does. Other than manage things, I mean.

It was after I watched Larry climb in through the fourth-floor window that I asked again. I tried Ramone this time.

This I did know. I had been a custodian for a little while. I don’t remember climbing in through any fourth-floor windows, but it was a long time ago, and maybe the job had changed.

So I believed the custodian one for a while. I’d see Larry in odd places. The bathroom at the end of the hall that’s been closed since August. Supply closets I don’t remember being there.

Thing is, though, Larry doesn’t wear a custodian’s uniform. He doesn’t have any keys on his belt but gets into every room anyway. Half the time I don’t notice him till he’s right behind me. He doesn’t have a name tag. I’m not even sure how I know his name is Larry. I just… know. Everyone knows Larry. But I still don’t know what he does.

I thought I might try one last time, and went to my boss, Maria.

“Oh, Larry?” she said. “Larry’s in security. You know.” Then she told me she needed my report by Thursday, not Friday, so I got back to work.

I left the office late. The place was empty—I’ve never seen anyone else stay even a minute late. Eager to get home, I guess. I was walking down the halls, thinking about take-out, when I ran into Larry.

There was this shuffling ahead of me, a thump and then a drag, thump and drag, from around the corner. It was a little weird, sure, but sometimes heating vents are just like that. I got around the corner though, and there was Larry. His shadow made a hulking shape on the wall, unclear on the edges because of the dimmed lights. His actual body kind of looked like that too—fuzzed all around.

I jumped about a foot, because when Larry glanced up, I swear his eyes flashed like a raccoon when you catch it rooting around your garbage. Only for a second though. He smiled, the way he always smiles when he passes me or anyone. He’s got a sharp smile. Straight, ludicrously white teeth. I once told him he should have a toothpaste commercial and he smiled even wider, wider than I thought possible, but I’m no anatomy expert.

The night he smiled at me, he was carrying something with him. A huge trash bag, lumpy in some places and sharp in others. It smelled like rotting moss and bubblegum. There must have been a hole in it or something, because a trail of liquid wound all the way down the hall. Larry noticed me noticing and bobbed his head up and down. Not a nod, but not not a nod. Sort of like he saw the gesture on television and it was the first time he decided to try it out.

I figured it was as good a moment as any, so I asked him what exactly he did.

Larry tilted his head and the motion made a skittering sort of snap. His smile curled, digging into his cheeks until it seemed to reach the hinge of his jaw. He had an abundance of teeth. More than one person ought to.

There were more snapping sounds, like things clicking in and out of place. His shape expanded beyond my peripheral vision, blocking the hall lights, but it didn’t matter because his smile seemed to glow, a crescent of white in a black hole, twisting and coiling, and when he spoke, his voice did the same. Folded in on itself, until I wasn’t sure how many smiles and how many voices he had, everything about him all tangled together.

“You know,” Larry said, smile spiraling. I couldn’t remember what I had asked him. Did I ask him anything?

“You know,” he repeated, the whole of him receding, fitting back into my sight. “You know.”

I’m not exactly sure what Larry does.

Sometimes I see him twice a day, sometimes not for weeks, until I run into him in the break room as he’s putting something that looks like coffee grounds but isn’t into the machine, and he turns to smile at me, all friendly, with maybe a few too many teeth. Sometimes when I drive past him on my way out, his eyes flash in my headlights like reflectors. His shadow doesn’t always match his shape. I don’t ask anymore. Larry’s been here since I started this job, and I have a feeling he’ll be here long after.

I don’t leave the office late anymore either.

The new guy pulls me aside a week after he’s hired.

I look at him.

“Larry? He’s in management. You know.” 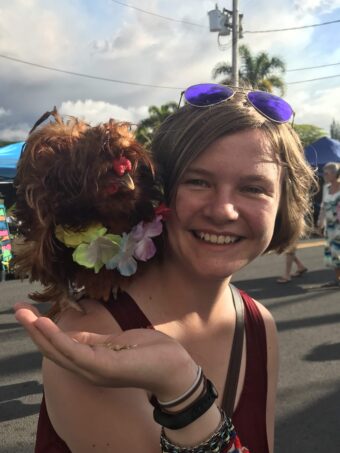 Elsa Richardson-Bach is a student at the University of Iowa. When she’s at school, she misses her pets and her car. When she’s at home, she misses her dorm and the local cupcake shop. She works at the university radio station because she saw The Fog (1980) and decided fighting ghosts over live radio at 1 AM was the ultimate life goal. She’s still holding out for the ghosts, but at least she’s got a cool DJ show in the meantime. Her most used phrase is “How hard can it be?” which has led her to as much success as it has repeatedly thrown her in the deep end. Luckily, she grew up on the coast and knows how to swim. The chicken in the photo is not hers, but she wishes it was.