The Faerie and the Knight on Valentine’s Day

Love in the Time of Cthulhu

By Gary B. Phillips

Pranked by a Pixie

Love in the Time of Cthulhu Gary B. Phillips 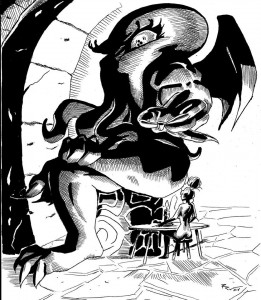 “One final question, Cassandra. Why do you deserve to be sacrificed to the great Yog-Sothoth?”

The candle on the table flickered as she studied the hooded man’s dark eyes and considered her answer. She hated when the elder gods sent a proxy. How hard was it to show up for themselves? It made her feel so… unattractive.

But of course, it was a trick question. No mere mortal deserves such eternal pleasure. Only through the sheer chaos of the universe is anyone worthy to be gazed upon by him. Or it. Do elder gods even have genitalia? Cassandra had never considered that question before. Maybe she could ask later.

“He is the gate, the key, and the guardian,” she said. And those eyes.

The bell chimed and thirty chairs screeched across the linoleum floor. The hooded man rose from his seat and bowed to her.

She held up three fingers, emulating the points of the elder sign.

Sam, may the elder gods rest her soul, had always told Cassandra that dating was the most dangerous game. She was thankful that Sam had not lived to see the day that the beasts rose from the sea and came from the stars. When the moon was always gibbous, as if hidden in the shadow of a great monstrosity.

Something squirmed at the next table. She sat down and scooted her chair as far back as possible without being too obvious. A mass of tentacles swarmed in the chair across from her. Each time one of the tentacles hit the table, it made a nasty squelching sound when the little sucker unhinged itself. Cassandra’s breath quickened in her throat as a single scaled tentacle slid across the table and coiled around her breast. It squeezed with a surprising gentleness.

She closed her eyes, fighting back tears, willing herself not to grab a dinner knife and lop it off. The tentacle or the breast, it didn’t matter which.

She waited out the rest of the time in an awkward silence. The bell chimed and she exhaled. Thirty chairs screeched again and she moved to the next suitor.

“My name is Cassandra. It’s a pleasure to meet you-“

You would not be able to say my name.

It spoke without words.

It laughed, a sound like static rising and falling in the void of space. The thing told her its name. Just hearing it — sensing it — made her feel intoxicated. Her world swam.

This was a good trip. I could get used to this. And the sex is probably out of this world. Literally.

It spoke again, in her mind.

I offer you the first dream.

“What is the first dream?”

Your death in me.

It was a tempting offer.

“I’m sorry. I’m looking for something a little less,” she considered her choice of words. “Final.”

The last bell rang and it was all over. Now the wait began. The bachelorettes mingled, drinking deeply from their glasses. The tentacled god approached Cassandra and attempted to make small talk, or in this case, small squelches. Cassandra affixed her empty glass to one of its suckers.

“Go get me another,” she said.

It writhed over to the bar, looking like a squid-cum-waiter trying to ever-so-carefully balance the wine glass. Upon reaching the bar, it lost its balance and dropped the glass, shattering it. Every eye (including The Great Eye) turned toward the quivering tentacle god and stared.

It slinked away forlornly and in that moment she almost pitied it. It was awkward.

The results were tallied and names were read from the list. Most of the girls vomited or fainted when their names were called and had to be carried out.

“Rookie!” Cassandra shouted when the last girl was dragged away by the tentacled abomination. She was happy that it had found someone. Especially because it wasn’t her.

She was the last human left. Two elder gods remained. One would be going home alone tonight.

She couldn’t help herself and squealed like a fan-girl. It’s not every day that your elder-god-crush reciprocates!

They prepared her by removing her clothes, shaving her head and bathing her. Then they led her into a dark room. Her high heels echoed on the floor, sounding sepulchral.

Something moved in the darkness and her heart fluttered.

Gary B. Phillips is a writer and software developer. He blogs irregularly for Apex Publications and is currently working on a YA Horror novel. He lives in Arizona with his wife, two daughters, three cats, and two chickens. His work has appeared in Interstellar Fiction, Lacuna: A Journal of Historical Fiction, and Daily Science Fiction, among others.