The boy was small for his age. His sister, who was not small, called him Pigeon. She was ten years older, and his parents said she was going through a phase.

At night she would reach down to his trundle bed and hold his hand. Or she wouldn’t, and he would wait for her to start snoring.

Sometimes he woke with a shiver, the window open and cold air washing over him, like a wave at the beach. His sister would be sitting on the windowsill with her back hunched round and cigarette smoke hanging in front of her like dragon breath. He watched until she dropped from the ledge and disappeared. He listened to her thump on the grass below, and the soft scuffs of her footsteps as she walked away.

She never ran away. She never shut the window. He thought he should tell on her, but he didn’t. He liked it when she ruffled his hair and called him Pigeon.

Once, after she disappeared, he slipped out from under his blankets. He could see his breath, like he was smoking. He could smell her smoke, like she was still breathing. He poked his head outside and watched her walking away in the yellow streetlight. She walks tough, he thought. She’s strong.

He ran his finger along the windowsill, which was plastic, like lego. He ran his hand through his breath and it disappeared. Like magic.

You’re pretty, he told her and she rolled her eyes.

Then she ruffled his hair.

Where do you go at night?

Her eyebrows pushed down and she stopped putting on mascara.

You’re supposed to be sleeping at night.

You woke me up.

She looked back in the mirror and dragged the black wand over her lashes. She layered black around her eyes until they seemed small and pale. Like far away stars.

Where do you go?

None of your beeswax.

She opened her mouth and drew lipstick on.

She did the same to him and it smelt like crayons. It felt like peanut butter on his lips.

He nodded and chose silver. She placed one hand on the side of his face and dusted his eyelids with the other.

He looked like a spaceman from the future. He lowered his lids and smacked his lips.

What do you do at night?

She had school in the day, then worked at Tim Hortons after. Except sometimes she didn’t go to school. He knew because he could smell her smoke when he walked in the door and she left the TV on.

She came home from work in her brown baggy uniform that was tight in the bum, and she swore a lot. She said the kids at school could suck her dick. But she didn’t have one, and he didn’t like it when she said that.

She reached down from her bed and he held her hand.

When she didn’t come back, his parents were angry.

Stick to your guns this time, his dad said. I mean it.

His mom scrubbed the counter with a gray dishcloth. His dad leaned against the same counter and she said excuse me like her teeth were glued together.

The police came and wrote stuff down. One of them yawned and the other one petted their cat, Timmy.

What a funny guy. Friendly, isn’t he?

He watched out the window

He sat on the sill. The drop seemed far.

He slept and went to school and his teacher said, Pay attention, please. Look up here. Eyes and ears open.

She left her brown Tim Horton’s uniform, her phone, and her makeup.

He shut the bathroom door and slid his finger across the eyeshadows. His hands were like a rainbow. He smeared white glitter on his eyelids and brushed mascara on his lashes. He got some in his eye and it watered. He got some on his cheek and when he tried to rub it off, it became a larger black smudge. Like a burn.

She left a pack of cigarettes. He dug through all the socks in her top drawer and found her lighter. He flicked it once, twice, and then it lit. He jumped at the flame, like it was a spider. It dropped to the floor and the flame disappeared.

He tried again, with the cigarette in his lipstick mouth. It tasted like dandelions. It felt dry in his mouth until his lips made it wet.

He flicked the lighter once, and then it lit. He held it to the cigarette but nothing happened. When he took it from his mouth, one side was burnt, the other soggy and stained red.

He asked his parents. Where did she go?

When she finally came home she smelled bad. Her hair was short and she said, Don’t ask questions. His dad turned off the TV but stayed in his chair. His mom heated leftover spaghetti and told her about evening classes to catch up.

He thought catch up meant running. He imagined his sister running to school in the night, but she hated school. And she walked in the night.

He reached up and she held his hand.

She took long showers until his mom called through the bathroom door.

She didn’t wear her makeup and her face looked pale. Like a ghost.

He went to the window, but she was already gone. 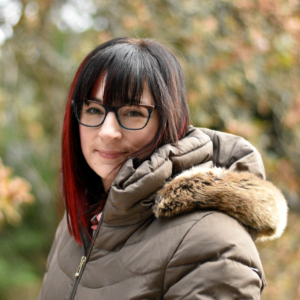 Angie Ellis lives on Vancouver Island in Canada, where she is finishing her first novel. An excerpt from that novel has been published at Narrative Magazine. She also has publications in Juked, Pithead Chapel, Passages North, Hypertrophic Press, and others. You can find her at www.angieelliswriter.com.