The Faerie and the Knight on Valentine’s Day

Love in the Time of Cthulhu

By Gary B. Phillips

Pranked by a Pixie

Pranked by a Pixie Matt Mikalatos 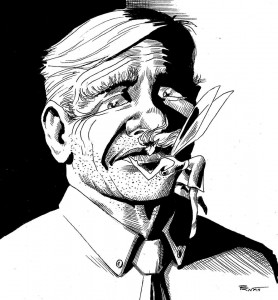 “I’d like my own reality show,” she said, and her gossamer wings fluttered, catching the light like fish scales in still water. It was the faerie equivalent of batting eyelashes.

Grissom sighed and shoved a pile of papers from the center of his desk to the corner. “I’d like to not have cancer,” he said. She gave him a calculating stare and he waited for her to speak. When she didn’t he said, “People would love a show about faeries. But you don’t show up on film.”

She cocked her head to one side. “I thought you used digital now?”

Grissom coughed, blotted his lips with his handkerchief and pushed hard on his breastbone. Another round of coughing, like a collection of knives in his chest. He forgot how literal faeries were. “You don’t show up on digital, either. What kind of show would that be? Right now we’d take a shot of my desk. Not exactly riveting television.”

She buzzed around the room, lighted on an Ansel Adams he had on the far wall. He’d never been to Yosemite, had always talked about it with his wife. Adams seemed to understand the shadows. They seemed darker than in other photographs. Somehow it brought the national park into bright relief.

“I could surprise people with good deeds,” she said. “Maybe there would be a kind but sorrowful woman who goes to work and I clean up the whole house while she is gone.”

Grissom tapped a pen against his desk. “Maybe on some other network. We specialize in the mean-spirited stuff.” He pushed back from his desk, thinking about it. “Maybe if someone got up in the morning and you had curdled all the milk, let the air out of their tires, stuff like that. We could call it ‘Pranked by a Pixie.'”

She put her tiny hands on her hips and landed back on the desk. “I’m not a pixie, I’m faerie. You should do a nice show. How about a bargain show? Humans are terrible bargainers. I could get humans to give me ridiculous things in exchange for faerie trinkets.”

Grissom thought it over. It wasn’t his sort of show, but it could work. “Give me an example.”

She laughed. “Once a human gave me all the hair on his head in exchange for a magic bag that always had gold in it.” She laughed so hard that she fell backwards, knocking over the picture of Grissom’s wife. He picked it up, wiped off the thin layer of dust and set it right again.

She laughed even harder. “Gold.” She could barely breathe she was laughing so hard. “Fame. Glory. You humans want the funniest things. All of Faerie would watch that show.”

He snorted. “Too bad none of you buy anything.” He scribbled a note on his pad. Tapped his pen on the desk. Coughed up some blood. “How about a show with trolls who are debt collectors?”

She shook her head. “Who wants to watch trolls making phone calls?”

“No, they would go and collect in person with their clubs. Like that bounty hunter show.”

She stared at him blankly. “It sounds mean.”

He pinched the bridge of his nose. “Never mind.”

The faerie flitted around the room, touched the couch, balanced on the daffodils in the blue vase, spun under the chairs and around the half-packed boxes. “You should do a nice show,” she said.

His wife, Lauren, had said something similar. He had almost quit his job for a family tour, but he wanted to make sure there was enough money for her. And he couldn’t stand the thought of being on some cruise liner with his parents and in-laws, all of them moping and deferring to whatever he wanted. Lauren kept saying she wanted more time, and that was the one thing he couldn’t give her. Six months. Maybe.

Not that it mattered. He’d keep working, put his name on a few more shows. How many would he greenlight before he was gone? Five? Three? The faerie fluttered its wings again, and he coughed, wiped his mouth with his handkerchief.

On the other hand, Lauren loved pixies. Faeries. Unicorns. Whatever. Maybe the show would take off, maybe Lauren would see his name in the credits and be happy, just for a few seconds. He pressed the intercom button and told his secretary to write up a contract for an as-yet-unnamed show. He said to make the contract out for Thistle Featherweight (“Obviously not her real name,” he said, “just write it up.”).

The faerie flew happy figure eights around the office. She zipped in close and he felt a sharp, needle-like pain in his lower lip.

“The deal is struck,

All debts be paid,

And a kiss for luck.”

He gasped, surprised, and a pungent aroma of cinnamon and sandalwood saturated him. She flew to the daffodils and tucked herself into the petals. There was a small flash of sunlight, followed by the smell of spring rain. “You have to sign the contract, you know!” he shouted, but she was gone.

He sighed and pulled the stack of papers over. His phone buzzed. Lauren had texted, wanting to know if he had hired a cleaning service. The whole condo was spotless. Counters shining, oven de-greased.  Someone had color-coordinated the linen closet.

Grissom stared at the text for a long time, thinking through his conversation with the faerie. Then he pulled out his to-do list and wrote: “Buy new milk on Tuesday. Get spare tires. Pay off all outstanding debts asap.” He ran through the conversation again, and then wrote, “Call doc about new biopsy.”

He texted Lauren to say he was coming home early. On his way out the door, he threw his handkerchief in the trash. He had a feeling he had a hit on his hands.

Matt Mikalatos is the author of seven books, the most recent of which is Capeville: the Death of the Black Vulture, a YA superhero novel. Learn more at http://www.mikalatos.com/p/matts-books-3.html You can also follow him on Twitter (@mattmikalatos) or Facebook (facebook.com/mikalatosbooks).