A beautiful woman robed all in white, lips red as rubies, followed the young, pale-skinned priest as he walked though the forest.

The priest knew she was a yakshi, a demon that tore men’s throats out and drank their blood to quench her thirst. She was said to live atop a palm tree. When darkness fell, she would descend to the ground, smelling of fragrant pala blossoms. Hapless travelers, entranced by her beauty, would approach. Coyly unfurling a betel leaf, she would ask them for a twist of slaked lime to smear on it — crushed limestone paste to add flavour to her paan. If the man offered her any with his finger, he was fair game for her.

The priest wasn’t worried. His shiny new crucifix lay weightless around his neck, but the magical stones in his pocket felt reassuringly heavy. “Throw one,” his old friend, the tribal chieftain, had told him, “and any monster will be hurled all the way to the otherworld.”

The woman followed him, humming a few indistinct bars of song. The priest wasn’t sure why her presence bothered him. But he had to get rid of her. There was something quite untoward about the situation.

When he next reached a clearing, he sat down beneath a tree and opened his bundle.

The yakshi settled down on the grass and regarded him with rapt fascination.

He took out a tin box in which he kept betel leaves and chewing tobacco. He opened it, unfurled a betel leaf and, his eyes on the yakshi, took out a stout iron knife with which he spread slaked lime on the leaf. A sudden flutter of pain crossed the yakshi’s face, as if he had said something extremely unkind to her.

When he resumed his journey, chewing the paan, he thought she wouldn’t follow. Iron was poison to a yakshi. He had heard stories of ancient magicians tricking a yakshi by offering her slaked lime on an iron knife; if she touched the iron, she would be weakened and easy game for a priest who would nail her—with an iron nail—to a banyan tree.

But she followed, a few paces behind him.

For a moment, he thought it was the wind, so low had her voice been. He walked on in silence, her tinkling anklets keeping a steady rhythm behind him.

“So cruel,” she whispered. A breeze ruffled the neck of his cassock. The priest fought a sudden impulse to turn around and check if she was indeed so close behind.

“I wasn’t planning to drink your blood.”

He snorted. What did a yakshi want with him if not his blood?

As if encouraged by his response, her anklets jingled briskly as she moved a bit to the side, so that she was just visible out of the corner of his eye.

He shot her what he hoped was a quelling look. She responded with a mischievous smile that went straight to his heart like a bolt of lightning. His breath quickened. “You can’t hurt me.”

She pouted. “True, there’s an etiquette to things. I can’t kill you without asking you for slaked lime. And if I do, you will extend it to me at the tip of your nasty iron knife!”

It was an impasse. But still she walked by his side.

“Why are you following me?” he asked.

He thought of casting the stones and ridding the world of her. True, she had not hurt him yet, and it was a bit unchivalrous to harm her first. But she was a yakshi. It would be a good deed.

Suddenly, she pointed. “Do you know what that flower is?”

Undeterred, she started giving him a guided tour of the forest, naming each tree and each flower, explaining the medicinal uses of plants and herbs. He soldiered on, trying in vain to ignore her.

As he neared the edge of the forest, she started dragging her steps. Her voice rose in pitch. She tried to entice him back with the bounties of the forest, with her laugh, with her expressive eyes.

She would never know how close he was to submitting to her eyes black as night, her blood-red lips, her skin golden like twilight dust.

He could see the sunlight ahead, the village path, and the spires of his church on the horizon. In a few more steps, he would be out of the forest.

“Can I have some slaked lime?”

He turned at the desperation in her voice. She stood pale and trembling, a betel leaf unfurled in her hand.

It would have been easy to take out that iron knife and nail her, ending her threat forever. Easier still to cast aside the knife and just go to her. The priest did neither. He shook his head and turned away.

Her pain and rage burst out of her in an unearthly howl, chilling him. The wind swept around him, pulling at his cassock. Trees swayed all around, showering him with leaves and tiny branches. The light ahead seemed unattainably far.

Fear eclipsed all thought. In an instant, he had taken out a magical stone with a muttered mantra. In that one instant, when he turned to throw the stone, he caught his last glimpse of her.

She hung onto a low branch, keening in sorrow. Through the rising storm, through her thick black tresses, he saw her face. He would never see such loveliness, such devastation, in a woman. His soul ached to wrap itself around her fragrant body.

And then the stone flew from his hand with a blinding light, and he turned and ran towards the village without looking back, like a madman, like a coward. 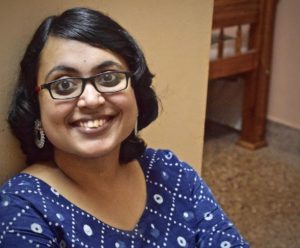