So This Chloe N. Clark

We go to the animal shelter on a Thursday. I want a dog. Liev says Thursday is the kind of day for getting a dog. We’ve done all the paperwork, been approved as “pet parents”—which is what the shelter calls it and Liev tried not to roll his eyes too much when they said it to us over and over. There were so many questions on the form and the shelter did a home visit and at the end of the whole thing I thought that we might as well have just adopted a human child except that neither of us likes that idea. There was a baby once, but then there wasn’t and sometimes we accidentally remember and it feels like someone has snuck up behind us and sucker punched us between the blades of our shoulders.

The first dog we see is as purely white as snow. His fur thick and I think about how I could push my fingers deep into his coat and maybe it would just keep going and going until I was up to my armpits and there was no way out. So we go on to the second dog.

The second dog has eyes the color of rubies—glowing red—and fur the color of the bottom of the ocean, so dark and emptied out. This is the dog we decide on. Liev wants to name him Abercrombie and I say no to that. We each have decided that we’re allowed one veto. I suggest Pog, because I always liked that game as a kid and because it almost sounds like “dog.” Liev vetoes that one. We settle on Catnip, though neither of us remembers being the one to suggest it.

Catnip chooses the living room as his bedroom. He settles onto the couch at ten PM exactly, and glares at us until we leave. In bed, Liev says, “Catnip seems a little weird.” I reply, “I like him. He’s got personality.” Catnip overhears this, all the way down on the couch, and decides that I am his favorite.

In the morning, Liev goes to work and I make breakfast for myself: pancakes the size of dinner plates and too much butter and syrup and a pot of black coffee. Catnip comes out and paces next to me until I give him a pancake and he eats it in one bite. Syrup spots cover the floor—they make shapes like golden inkblot tests. I spot a cat and Catnip sees a baby. He points it out with one paw, very delicately. I nod and wipe the syrup up with a paper towel.

After a couple of weeks, we have gotten our routines down. Liev goes to work and Catnip and I make breakfast and then take a walk and then do a crossword puzzle and then we take another walk. The second walk is always the longest—we go all over town and through the woods and down to the graveyard and Catnip paces as I sit on the grass and stare at stones.

Sometimes when Liev works late into the night, I sit on the couch next to Catnip and listen to his breathing as he falls asleep. If I’m lucky, I fall asleep next to him and fall right into Catnip’s dreams. Catnip often dreams of the ocean. One night he dreams of swimming through the water, diving down past all of the fishes and the weirdest animals I’ve ever seen—all with so many arms and mouths so wide and eyes like glowing orbs—and deep, deep down to the bottom. There are shipwrecks covering the floor and we swim inside centuries-rotted ballrooms, where skeletons dance with stingrays, and into the cabins where dead men sleep so peacefully. Catnip can’t speak, even in his own dreams, and so he points to a painting on the wall of a ship. It is of a woman holding a child and the child has golden curled hair and eyes the color of moss and the woman looks so happy that I want to wake up, because I think my heart will burst except maybe that’s just because I’ve been holding my breath. And then I wake up and Catnip stays dreaming and I go up to my own bed and wait for Liev and somewhere in there I fall into my own sleep.

On a Friday, Liev tells me that he thinks we should move. He says, “this town holds too much of the past.” And I don’t disagree. Catnip paces between us, wagging his tail, and I think about how moving will take us far away from the stones and the grass and the graveyard.

Our new house is small and bright and Catnip likes it. I try to settle in, to find new routines, but often I get in the car, Catnip hopping into the backseat, and drive back to our old home. We walk our old path, we sit on the grass. I sometimes talk to Catnip as if he will answer back. I say, “look at the sky, Catnip, it’s so blue.” I say, “I would have taught her so many things. I would have taught her why the sky is blue and the ocean is salty and the stars are so damn far away.” And Catnip listens, wagging his tail, and his eyes shine so bright and red like traffic lights.

And one Saturday, I wake up before the sun and the house is quiet. Liev sleeps beside me, so peacefully, and so I tiptoe to the living room and I sit down next to Catnip. Catnip rests his head on my knee and we stare out the window, watching the sun slowly rise and the light fills the room and we both stay so quiet that we can hear the other breathing and that is enough. 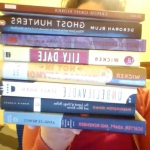 Chloe N. Clark holds an MFA in Creative Writing & Environment. Her work appears in Apex, Bartleby Snopes, Diabolical Plots, Hobart, and more. When not writing she makes cupcakes, teaches college composition, and can be found on Twitter @PintsNCupcakes