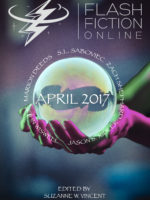 The Terrible installed a conveyor belt exclusively for her. It carried Invulnerabella along, wriggling helplessly toward the metalworks’s blazing furnace, her sinewy arms bulging against carbon-titanium cables. Her curse stole her strength whenever she was bound; the material was purely showmanship. His trap would immolate her in the same metalworks that had forged these cables. It was the perfect doom, better than all the other dooms he’d ever concocted for her.

“History will remember me. Not Dr. Ogre. Not Male Gaze. It was The Terrible who conquered you!”

She squirmed, cables grinding against her golden chest plate, her raven hair capturing the firelight. Watching gave him a knot in his duodenum. What was he supposed to do after killing her? He’d felt this dilemma for several dooms now.

“Well?” he chided, trying to get his mind off it. “What do you have to say for yourself?”

Invulnerabella pursed her lips. The metalworks’ triple furnaces roared dully, and the Terrible cocked an ear for her final plea.

Instead, he heard Taylor Swift’s “Shake It Off.” Haters hating on loop.

Invulnerabella sat up despite the cables, frowning at the golden bracer on her left wrist. The song was coming from it, with a liquid crystal display.

He gaped. This was impossible. Where did she get the strength to bend carbon-titanium?

She never swore. The Terrible had always thought she didn’t know how.

Invulnerabella groaned and laid back on the conveyer belt, still traveling towards the metalworks. She stared up at him. “Mercer, we need to talk.”

“The citizens need me,” she said so sharply that he almost apologized. She was scary as hell when she was mad. Come to think of it, in all the times he’d captured her, she’d never been mad before. “We’ve talked about putting others’ needs before yourself.”

This had to be a ploy. He cackled. “You’ll have to beg harder than that!”

“We have to have made some progress in two years…”

Invulnerabella squared her shoulders, thrust her hips up from the conveyor belt, and snapped the carbon-titanium cables like dental floss. One ricocheted at The Terrible, who was lucky the shock made him fall over. Otherwise, he would have been beheaded.

She dropped from the conveyor belt, dusting off her biceps. “We keep doing this. At first, I thought you were working through some issues. Then, I hoped after enough schemes failed, you’d have a breakthrough.”

“Impossible!” The Terrible hollered and hit a button on the back of his control-glove. Three more carbon-titanium cables whizzed from behind the metalworks and at the back of Invulnerabella’s head. She rolled her eyes and sidestepped, catching all three under her left armpit. With a single yank, she tore them from the machine and left them limp on the floor.

The Terrible remained floored, eyeing the hatch to his basement. He had a secret weapon down there but was still in shock that she somehow had her powers. “B-but you were bound!”

“Part of the problem is you never thought that was contrived. I don’t lose my strength when in chains, or under the full moon, and I was never vulnerable to eye lasers.”

She stamped so hard the steel floor dented all the way to his hatch. “Took five months to figure out I was faking. Then Ricardo got better. You could, too, Mercer.”

“Call me The Terrible!”

“Better?” The Terrible scoffed, sweeping to his feet. “But I’m the best! The Master of Bondage.”

“The S&M community hates you. You give them a terrible image.”

She made for the window, presumably to go fight her Kraken, but The Terrible rushed into her path. He unzipped the mouth of his mask.

She warned him off with a fist. “Used to be chainmail codpieces. Now this mask. In another couple plots, you’ll build power armor. Villains don’t come back from power armor.”

The Terrible wiped his unzipped lips. “All these years you were patronizing me?

“You guys came after me instead of the citizens. I cut crime in half by donating six hours a week to wrangling you all. You never even cared that I never died. I thought you’d be the first to get better, Mercer. Not the last.”

“The Terrible! And I don’t need help. I’m a master engineer–“

Taylor Swift sang from her wrist again. Invulnerabella sighed so hard the air could have caught fire. “I’ve got to go. If the Kraken is actually loose….”

He stared at her singing bracer. “It’s that bad?”

“It’s got so many tentacles, plus it straight-up eats civilians. You’re a sweetheart compared to that thing.” She shook her hair out, then turned toward the window. “You’ve got issues, but you can still come around. I want to believe in you.”

As she strode past him, her gaze softened, and she patted him on the shoulder. Imagining the Kraken devouring her gave him another knot in his duodenum.

Maybe for the first time in his career, The Terrible ensnared her without her expecting it–catching her wrist in his left hand. He tugged for her to pause, but she was super-strong and dragged him behind her for several steps.

“Wait, wait,” he said, scampering alongside her, though unable to meet her eyes. “Can I come?”

“If this is a diabolical plot–“

“I’m the Master of Bondage. No myriad-armed beast can escape me,” he declared, glancing at the hatch to his

basement. “Plus, I kind of already built that power armor. It’s got to work on somebody.”

“Constructive therapy.” She beamed. “Not a terrible idea.”

He extended his control-gloved hand to her, offering a shake. “For tonight, call me Mercer.”