Most families went to one of those U-Cut places, where trees were raised up like livestock: densely packed branches, perfectly straight trunks and conical silhouettes. The more squeamish went to a pre-cut lot and lugged a tree home, cold and already drying out.

A Doug or Grand fir would do fine, but every year Grady’s family drove up the deep-rutted forest roads before dawn in search of Noble habitat.

Within the snowline they donned red and green camouflage in mistletoe print. Each adult carried a pack with fruitcake-pellet bait, shiny bows for diversion, and popcorn string snares, as well as a felling axe and a handsaw. Chainsaws were quicker, but better for U-Cut lots. They were too bulky, too noisy, for a clean cut on a feral tree. And unsportsmanlike, besides.

“Carry this for me?” Dad asked and held out his handsaw.

“You remember how to use it, just in case?”

“I remember,” he said, and grinned nervously as he slung the D-shaped frame of the saw over a shoulder. His aunts chuckled and nodded, perhaps remembering when they were first trusted to carry the tools. Grady had observed a half dozen hunts, had helped afterward trimming branches and bucking stumps, but hadn’t cut a tree yet. Maybe this year, Dad would let him try.

Then again, with how wild some of the trees got, he wasn’t sure he could do the job fast enough. He clutched the saw tighter and pushed the thought away.

They set out, silent and sweetly minty with the candy cane pheromones they’d daubed on to cover their scent.

Aunt Amy shook the jingle bells, and they all paused to listen. Grady wasn’t sure exactly what it was about the trappings of Christmas that called the trees so strongly when they were at that age. It was as though the holiday spirit was infectious for evergreens as well.

In the hush that followed, he heard it: the distinct rustling of branches, shivering in the same rhythm as the bell.

Grady followed Dad through snow and underbrush. His aunts went the opposite way. Circling was often the best bet—if the tree focused its attention on one hunter, the others could take it by surprise.

Trees may be rooted to the spot, but they were wily. One year Uncle Carl got a lashing when he stepped too close. Even the slimmest branches struck with whipcrack speed and ferocity and from every angle at once. The bright pink welts across his arms and upper back lasted for weeks; the bark splinters took even longer than that to work their way out. Needless to say, Uncle Carl never joined another hunt.

Ahead, the clearing opened. The tree stood in its midst, branches shivering in tune to the jingle bell call. It was a Doug fir, thin and scraggly in the understory of its much older fellows. An undeniably wild thing in every rangy branch and sharp-ended needle. Dad shook his head; not a Noble, after all. Perhaps they’d been overhunted in this area. A shame.

Across the clearing, string lights twinkled as Aunt Pat inched out from cover, decked in glittering tinsel and baubles. Further along, Aunt Amy emerged in similar decoy décor, still jingling to offer a doubled distraction. A sparkly garland trailed between them.

The tree shivered when they got within a handful of paces, refusing to be soothed by the bells. Aunt Amy switched to verbal assurances, a steady, soothing stream of “Ho, ho, hos,” that worked much as they would have on a spooked horse.

When the tree had calmed, both aunts whipped up the garland, looping it around the tree’s lower branches and pulling them back to expose the vulnerable trunk.

Dad leapt out of hiding, axe ready, and Grady followed with the saw gripped tight.

The tree erupted in a furious struggle, needles flinging free like projectiles at their faces, even as Dad skidded in on his knees to deliver the first blow. Both aunts began a verse of “O Tannenbaum” in hopes of distracting it.

Grady stood just out of range of the branches, as he’d been taught, waiting to hand the saw over once Dad got halfway through the trunk.

A long branch slipped loose of the garland lasso and smacked Dad hard across the face. He ducked against the battering onslaught; the axe slapped out of his hold.

Grady looked at the widening gash in the trunk, the saw in hand, his caroling aunts. If he moved fast, he could duck in, hand Dad the saw, duck out—

Or, he could do it himself.

He lunged into the fray, set the serrated blade to the cut, and began to saw.

The tree thrashed, raining needles, swinging at him with all its might. Grady was small enough that the branches couldn’t quite reach him—not with the force they wanted.

As he sawed deeper, the thrashing slowed. Dad, holding branches out of the way, nodded, a proud twinkle in his eye, and Grady severed the trunk.

The tree fell to the forest floor in a sigh of branches. As his aunts helped Dad get up, Grady touched the stump, surprised at the bittersweet mix of relief and regret that filled his chest. When Arbor Day came around, he’d be sure to plant saplings in its honor.

Dad pulled him out of his thoughts and into a big hug. Aunt Amy and Aunt Pat propped up the tree to take his picture with it.

Despite its straggly branches, irregular trunk, and odd growth pattern, Grady beamed alongside his tree.

The air smelled of pine and candy cane and the perfect Christmas. 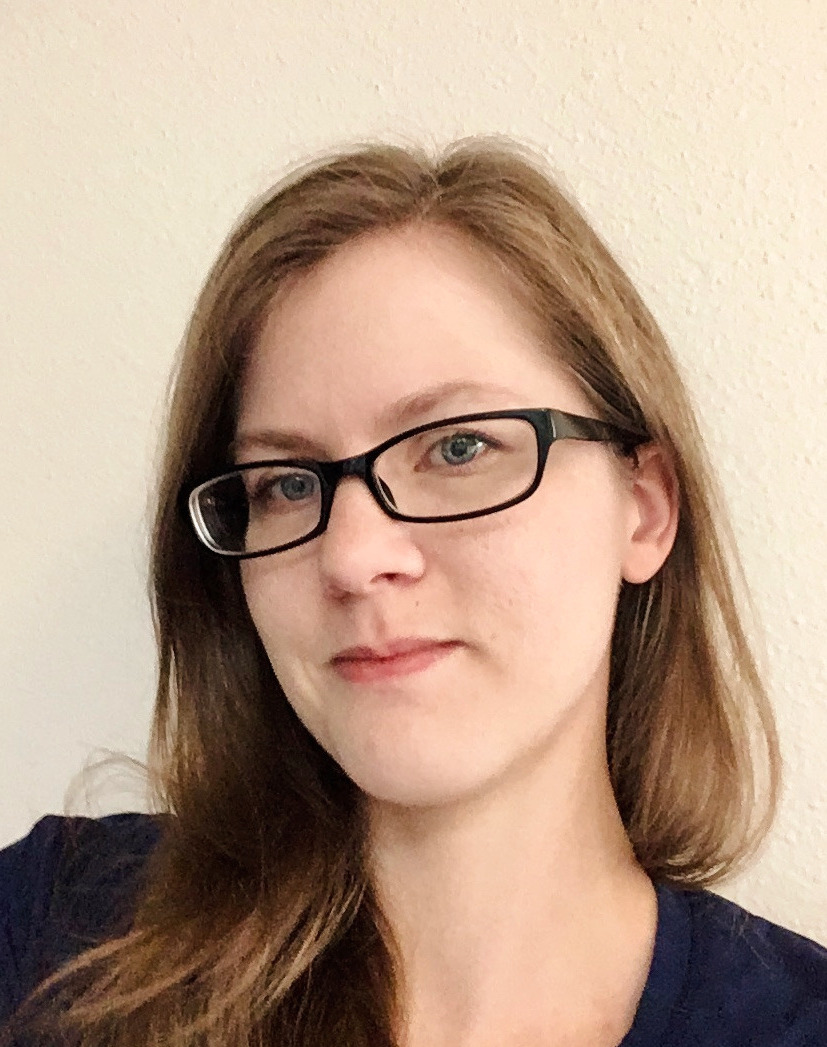 As a fine art professional, Marissa James has wielded katanas and handled Lady Gaga’s shoes. As a veterinary assistant, she has cared for hairless cats, hedgehogs, and, one time, a coyote. As a writer, her short fiction has been published in nearly a dozen magazines and anthologies including Daily Science Fiction, Mysterion, and Flash Fiction Online, and is forthcoming from Kaleidotrope. She resides in the Pacific Northwest and can be found tweeting about all things writing at @MaroftheBooks.