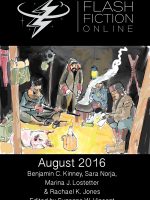 You Are Not a Metaphor

FXXK WRITING: THE GLOM OF DOOM

You Are Not a Metaphor Marina J. Lostetter

The diseases that pop up these days–they say that they’re just stand-ins. Metaphors for real illnesses. Like, the world got so fed up with comas and Alzheimer’s that reality decided to rewrite itself and give us sleeping-beauty disorder and zombieism instead.

He’s not really undead, they keep saying. She’s not really a werewolf. It’s all something else–those “real” illnesses are still there. We’re just all hallucinating as a species, using sickness as an allegory.

But you are not a stand-in, or a cipher, or a symbol. You are not a character in a story.

And I am not a narrator.

The doctors call what you have “Escapist’s Disease.” At first, they thought it had replaced multiple-personality disorder or schizophrenia, but now they’re saying people with “Escapist’s” had a daydreaming problem back when the universe worked properly. The disease infects people who read more novels than news, or who obsessed over plot holes in TV shows. People whose imaginations were always in high-gear. People who could dream bigger than the rest of us.

How awful is that? You spent a few too many hours a day with fictional people and fictional scenarios and bam; now you’re stuck running through fictional lives for the rest of yours.

But it’s not a metaphor. What’s happening to you is real. Even though, sometimes–probably like right now–you don’t think so.

“Stop referring to me as he,” you say sometimes. What gender are you are today, I wonder? “Stop telling me I’m sick. I’m not sick. Stop telling me things about myself that aren’t true. I don’t live in a world where fantasy illnesses are real. Stop saying you you you.”

I get it. I do. You never did care for second-person point-of-view.

You’re sitting there on the broken bed, wrapped in our stained sheets just staring at the orange prescription bottle. There’s a half-eaten, poor-excuse-for-a-hamburger from yesterday on the nightstand. It’s stinking up the place, but I’m afraid to take it away from you. Sometimes you think garbage is important, like it’s an object of power and only you know its secrets.

I can’t tell if you’re conscious of me at all right now. Can you hear me? See me? Feel me?

I look at your big body and those little pills, and I wonder how anything so tiny could make a difference. With them you’re fine, you’re here with me. Without them…

There’s one left. If I knew who you were today, I could figure out if it’s worth making you swallow it or not. I want to save it for when you don’t like who you are, because I don’t know how long it’ll be until we’re given a ticket for the pharmacy line again.

I want to save it, but I also want to make you take it.  Mostly because I know you don’t know me.  You never do when you’re like this.  You’ve forgotten all about me.

…that’s what I thought.

It hurts. How can it not? You can’t love me if you don’t know me.

But I’m being selfish. Maybe who you think you are today–how you believe you live–is better than all this. Better than the breakdown of physics, and the insertion of minor magics, and the inversion of truths and untruths. Better than ration lines and quarantine zones and martial-law states. Maybe that’s why you chose to be that person–or the disease chose, whatever.

I can tell, with the way you’re stiffening, that every fiber in your being is fighting what I’m saying–fighting with the narrative.

But at least it’s an indication I’m getting through.

I need you to know that I love you.  The real you.  And part of the real you is this disease, I understand that.

I’ll leave you be now.  I’ve got our ration tickets–five of them if you can believe it.  I’ll come back soon with bread and cheese, and maybe you’ll be able to talk then, be able to tell me who you are and what it’s like where you’re from.

Wherever you are today, I hope you’re happy. I hope you love and are loved. Maybe you’ve got kids… you used to say you wanted kids.

In truth, I won’t give you the pills ever again if you ask me not to. If you like who you are today, you can stay. And tomorrow, if you’re the same person, and the day after that. Maybe if you like a life enough, it won’t get interrupted by another.

But if you don’t like it, if you need to escape, all you have to do is ask.

Come out of the stories if they’re too much.

Come back to me.

Marina J. Lostetter‘s original short fiction has appeared in venues such as Lightspeed, InterGalactic Medicine Show, and Baen.com.  In 2012, her story, Master Belladino’s Mask, won second place in the Writers of the Future contest.  Her tie-in work for the Star Citizen and the Sargasso Legacy universes can be found in the Spectrum Dispatch and Galaxy’s Edge Magazine respectively. Originally from Oregon, Marina now lives in Arkansas with her husband, Alex.  She enjoys globetrotting, board games, and all things art-related.  She tweets as @MarinaLostetter, and her official website can be found at www.lostetter.net.