You Called Me Avra Margariti

Doused in sugary sunlight, Janie chugs milk straight from the carton. She wipes her sleeve across her pouty fourteen-year-old mouth. “I’m off.”

“To school?” Carol asks, ever hopeful.

Janie’s laughter rings like wind chimes during a storm. “I’m needed elsewhere. Kansas, I think. Dunno where exactly—mornings mess with my intuition.”

“What’s in Kansas?” Carol turns her back to Janie, pours a cup of coffee. She’s learned by now that her daughter clams up if Carol shows too much interest in her life or the lives of her worshippers.

“A man about Grandpa’s age. His name’s Rupert, and he’s sick, so he doesn’t always remember who he is. Right now he’s scared and confused, and he’s calling out to me without realizing it.”

Carol knows where this is going. “Why remind him of his name when he’s going to forget it again the moment you leave?”

This is Janie’s response to everything. Oh, Carol, with that long-suffering, world-weary tone. Carol, never Mom.

She watches her daughter tug on combat boots and finger-comb bleached-blond hair. “Will you at least give me a kiss?”

One moment Janie is there, the next the air shifts in iridescent ripples, and she’s gone. Carol caps the milk carton and returns it to the fridge.

She marvels at how teenage girls, even deified ones, can be so cruel to their mothers.

“Where are you going this time?” Carol asks, sorting fresh laundry into piles. Janie had promised she’d help, but she’s been summoned again. Carol doesn’t blame her. She’s proud of her daughter, even though she doesn’t always understand Janie or her deity duties. Names. Always speaking the names people need to hear the most. But Janie still won’t utter the word Carol yearns for.

“There’s this woman in Seattle. She adopted an American identity when she came here. But today, she needs someone to call her by her real name, or else she thinks she’ll go crazy.”

“Okay, honey. Just be careful. Seattle’s a big city,” Carol says and tries to hug Janie, who expertly evades it.

The air particles snap and crackle. Just like that, Janie vanishes. Carol lifts Janie’s bedsheets to her nose. She remembers a time when her daughter couldn’t teleport at will, when the top of her baby head smelled like milk and lavender. Carol blames herself for Janie’s powers, though Janie would say they’re a blessing.

Now, beneath the scent of laundry detergent, she inhales Janie’s lingering perfume and the smoke of a hundred cities Carol has never visited.

Her daughter stares at her: nightgowned, wild-haired, incredulous. “I’m a deity, Carol. When people call, I go.”

You’re a minor deity, Carol wants to snap. Let the Gods and Goddesses deal with the mess of the world. Instead, Carol only sighs. She’s always backtracking and acquiescing to preserve the porcelain peace between them. “Fine, but please take a jacket. New York is cold this time of year.” She forgets to feign disinterest when she adds, “Who called you?”

“A girl born in a male body. She’s at a college party, and she’s drunk. If someone doesn’t speak her true name, I don’t know what she’ll do.”

Carol is about to let it go, but she’s sleep-deprived and has work in the morning and Janie is gone more and more lately.

Janie disappears like an extinguished flame. Instead of returning to bed, Carol sits at the kitchen table, a desert island in a lightless sea.

Waiting for Janie to return, she drifts off. Carol’s dream is also a memory. In it, they’re in the supermarket, and five-year-old Janie is throwing a tantrum in the frozen-food aisle.

“Stop it,” a young, frazzled Carol hisses, “or I’m leaving without you.”

Janie only wails louder, the sound like a fire alarm. Carol lets go of Janie’s hand and stalks away, rounding a corner.

Carol only wants to teach Janie a lesson. But for a terrible moment, she thinks how easy it would be to keep walking until she reached the automatic sliding doors. Guilt bursts citric-sour in her mouth. She sprints back to the frozen-food aisle, to find a woman holding Janie’s hand, leading her away.

The woman turns around. She’s tall, with waist-long hair and an expression of vast calmness on her regal face. The woman’s wavering outline shimmers the colors of the Aurora Borealis.

“I thought she was alone,” the woman Carol knows is a Goddess says.

The Goddess smiles somberly. She looks right at Carol, who feels like a butterfly on a lepidopterist’s board. “Don’t be afraid,” the Goddess’ melodic voice says before she blinks out of sight.

“You were right. New York really is cold.”

“Janie?” Carol mumbles. Her neck feels stiff, and her face stings where it rubbed against the tabletop. Dove-pink dawn creeps across the dark sky. It all looks like a gouache painting.

Carol glances at her phone on the table; the battery died sometime during the night. “No, I didn’t. You’ve told me not to bother you while you’re—”

Janie curls her plum-painted lips. Carol had forgotten how beautiful her daughter’s smile is when it isn’t mocking her.

Her brain lags at first. Mom. Janie hasn’t used that word since that day at the supermarket, when her powers manifested. Cautiously, Carol opens her arms. Janie kneels down and lets the arms cradle her. Her wind-swept hair smells like lavender and wood-smoke.

Carol marvels at how teenage girls, human or divine, can fill their mothers’ hearts with so much love. 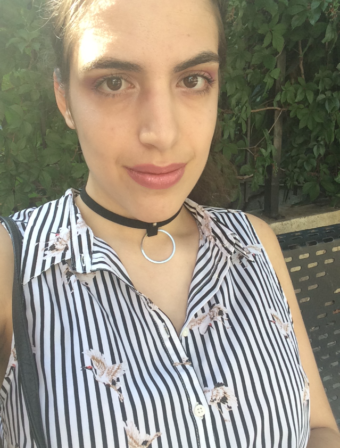 Avra Margariti is a queer Social Work undergrad from Greece. She enjoys storytelling in all its forms and writes about diverse identities and experiences. Her work has appeared or is forthcoming in Daily Science Fiction, The Forge Literary, The Journal of Compressed Creative Arts, Argot Magazine, The Arcanist, and other venues. You can find her on twitter @avramargariti.