Anyplant who was anyplant knew that Yuuna and I were the only true contenders for the Victory Vine of Supreme Best Dressed in the 576th Annual Pollen Festival. The two of us had been sweeping up championships anterior and posterior all across Toutatis.

So when the judges announced a three-way tie for the final round, I fainted.

Yuuna stepped aside, allowing me to crash to the floor before I could smash into them. I nearly bruised my prime flowering bud. If it hadn’t been closed tightly for the announcement, I would have been in trouble.

After the judges recovered me with pollen salts, I thought-projected at Yuuna, What kind of a name is Miitica anyway?

Sounds like they came from the fifth parallel or something, they responded.

Yuuna and I never got along. Their scent manipulation was maddeningly superior, but my petals were always voted most vibrant. However, we’d developed the rapport that comes with living together on the pageant circuit. We were like jealous but resigned nursery-mates. Without even asking, I knew we were of one encephalon: Miitica, wherever they came from, couldn’t win.

Two hours after the canopy buds opened and one hour after curfew, Yuuna and I met a cluster away in one of those run-down, rot-infested hotels whose leaves are always the same sickly shade of brown. That’s how desperate we were.

I was last year’s Supreme Best Dressed, and winning twice in a row would grant me fame across Toutatis, perhaps a sponsorship. Losing to Yuuna would be embarrassing, but I could recover. Losing to an unknown would squash my budding career completely. No one would take me seriously again—I’d be washed up, past my prime, done.

Trying not to absorb too much rot through our roots, Yuuna and I debated. Straight sabotage is the Qeexassirian beauty circuit way, but Miitica would be expecting it. I could imagine them waiting for us in their darkened chamber, stamens rippling smugly, peduncle bowed in amusement.

We settled on subtlety. During the competition tomorrow, I would slide my waxiest leaf across their anterior bud again and again. Yuuna would play the clumsy flower, knocking into them and gently ripping their buds. We would both rub pollen on them, confusing the pheromone portion of the judging.

Three rounds into the finals, our plan was underway. I’d worked up an uncouth, waxy sheen on Miitica’s anterior. Yuuna had managed small tears in the front buds, so Miitica kept bending their peduncle to cover up.
I came to the wings to watch Yuuna onstage for the scent manipulation. They swapped pollen after pollen, just as the judges asked, effortlessly keeping up with directions. I had struggled with speed—but I was confident I would make it up in the color kaleidoscope final round. Miitica’s petals looked rough, and no matter how they performed, marks would be taken off for unkempt appearance.

As I was mentally celebrating my victory, two large Qeexassirians stepped in front of me.

We heard you’ve been harassing our nursery-mate.

The thought projections from both reeled me backward. Clumps of dirt stuck in their roots as if they’d come straight from a meal without washing. Had they not even rinsed the excess chlorophyll from their leaves? My own roots shuddered in disgust.

We demand that you sabotage yourself in the last round. If you don’t, the rips we make in your petals won’t be the gentle ones Miitica has suffered. We’ll make sure they never heal. You’ll never compete again.

Shaking their pistils menacingly, they stumped off.

Yuuna’s scent manipulation faltered. They ended on a sour note and rushed past me off the stage, their petals pastel with fright. Miitica’s nursery-mates must have confronted them before the pheromone round.

All contestants assemble for the last round, came the thought direction from the judges.

Shaking out our leaves, Yuuna and I trundled onto stage. Miitica joined us, their stamens wavering to taste our moods, but I kept my pollen puffs worry-free.

Miitica went first. They preened and pranced, roots straining as they gave it their all. Yuuna stayed subdued, keeping their petals pale and half-closed. I averted my senses, embarrassed for them.

When it was my turn, I pulled myself tall, stepped forward, and turned my petals brilliant violet.

Everyone agrees violet is my best color.

I was glorious. My color kaleidoscope was even more impressive than Yuuna’s scent manipulation should have been. I swapped to bright amber—the most difficult color swap for that time of year—and then thirty-eight shades of blue, the number of competitions I’d won this year. I finished with a rainbow burst, and the judges waved their leaves wildly in congratulations.

As they wound the Victory Vine through my petals, a thought-projection came from the wings. We hope it was worth it. Miitica’s nursery-mates.

A group came for me after the canopy buds opened. As they tore my petals, I kept brilliant. And when it was over, I lay respiring heavily in a pool of sap, pollen-puffing in resignation.

When I limped into the hotel, Yuuna rushed to my side. Iiliia! What happened? Are you all right?

I thought-projected to the entire room, It was horrible! I was attacked. Please, fetch a… healer…

I wavered on my roots and collapsed under the bioluminescent chandelier. Yuuna trundled away—but I’d attracted attention.

A cluster of reporters covering the competition stood by the front leaf. They approached, and I let a drool of sap run down my peduncle. Oh, I moaned. It… hurts…

One bent down and slipped something under my leaf. When you’re healed, call me. Pollen and Pistil Monthly would love to have an exclusive on your story.

A second one brushed a wisp of pollen from my stamen. Purple Kaleidoscope has a bigger monthly readership—

Yuuna rushed back to my side. Give them room to respire!

As they shooed away the reporters, I let my flowers turn a pleased shade of crimson before fading back to brown. 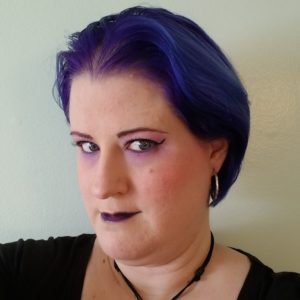 Samantha grew up in a small town in Iowa but became an expat for her Canadian husband, whom she met in the Massive Multi-player Online Role-Playing Game Star Wars: Galaxies (before the NGE, of course). She’s the mother of a kindergartner and twin preschoolers—a houseful of girls will definitely keep her husband on his toes. In October 2017, she was diagnosed with metastatic breast cancer. Modern medicine is amazing, which means her prognosis is good, and she’s continuing treatment indefinitely. She’s hopelessly behind on her blog, but she’s spoken frankly about her journey at http://www.saboviec.com/blog/.

Samantha’s short fiction has appeared in AE, Flash Fiction Online, Grievous Angel, and elsewhere. She has three novels out about angels and demons: the first two and a companion novel in her Fallen Redemption trilogy. She’s also the Reprint Editor and has been a slush reader since 2016 at Flash Fiction Online. You can read more about her work here.