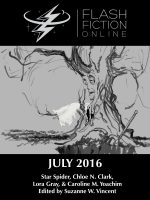 When Nora arrived at the fertility clinic, Jim was there, waiting. He was an amazing husband, hard-working and kind, and made entirely of flesh. Nora’s only regret was that they met too late to have a baby unassisted.

“A bundle of silverware isn’t a baby,” Nora said. Her sister’s son was made of spoons carefully pieced together in the shape of a baby boy. Plenty of places sold human-looking bodies, but the current fashion was a less biological appearance.

Nora hated that everyone built children instead of bearing them. Her friends made children out of plastic wrap, quilted silk, and reclaimed wood from antique ships. The beach outside their apartment swarmed with fake children that didn’t eat or sleep. Everyone insisted that SentiCore children loved their parents as well as any flesh-child did, but Nora found it hard to believe. “It’s basically a robot, programmed to coo.”

Jim shook his head. “He’s not programmed. SentiCore generates a randomized blend of the parents’ minds.”

“Building a kid seems wrong,” Nora said. Jim wanted children, and he didn’t care whether they were flesh or not. He only agreed to come to the clinic because he knew how important it was to her. “Thank you for doing this.”

The doctors weren’t optimistic about their chances. Nora was almost fifty, and while her body had been rejuvenated, her eggs were in terrible condition. The doctors implanted three embryos and told her to come back in twelve days–on Nora’s birthday–for a pregnancy blood test.

“This will be my birthday child,” Nora said. “We can have a party after the test. I’ll invite all our friends, and get a big cake–”

“What if they don’t take?” Jim asked. “Would you really want all your friends around?”

“A party for just us, then.” Nora refused to consider failure. If this didn’t work, she was too old to try again.

Nora went to visit her sister. There were still five days until her birthday, but she was certain she was pregnant, and she secretly hoped Vivian would notice. “Why not go back to work, Viv?  It’s not like the baby really needs you for anything.”

“Oh, but he does. SentiCore children develop better in an enriched environment, same as a flesh baby.” Vivian had her glasses on and her eyes were continually flicking to the side to check which fashions were trending. She adjusted the bracelet lights embedded in her wrist to a sapphire blue.

“Should I pick him up?” Nora saw made children everywhere, but she’d never touched one.

“Sure, go ahead. We’ve decided to call him Rory.”

“He isn’t very cuddly,” Nora complained. His body was hard and cool to the touch. With a SentiCore you could animate almost anything, so she was baffled at her sister’s choice. “Will he tarnish?”

Nora stroked the spoon that formed one of Rory’s cheeks. The SentiCore unit in his throat made a gurgling noise. “You’re young enough to have a flesh baby.”

“Nobody has flesh babies any more.” Vivian said. “Too much work taking care of them. If he doesn’t like the spoons, he can pick out a new body when he’s a little older. The system is very practical.”

Nora forced herself to smile. Vivian was nothing if not practical. When her knees had gone bad, she’d replaced her legs with the flexible bio-plastic that was currently trendy, and she often talked about someday replacing the rest of her flesh. Nora hoped it wouldn’t happen any time soon. She worried she wouldn’t love her sister as much if she was made entirely of plastic.

The morning of her birthday, Nora decorated the apartment with brightly-colored streamers, determined to have her party. Jim didn’t help her decorate, but he didn’t object.

The clinic drew her blood.

The results were ready in seventeen minutes.

None of the embryos had implanted.

When they got home, Nora burst into tears. It was her birthday, and the pregnancy was supposed to be her birthday present. The timing had worked out so perfectly, as though the universe was promising her that it would all be okay. She felt betrayed. The bright colors of the streamers mocked her. Jim noticed her staring at the party decorations and quietly took them down.

The streamers had been too cheerful to bear, but it bothered Nora to see the room go back to normal, as though nothing had happened. “I need to go out.”

“Let’s take a walk.” Jim left the streamers in a pile on the floor.

They walked along the beach, and the tears on Nora’s face felt cold in the wind. A boy made of popsicle sticks was on the beach with his father, flying a kite.

“It doesn’t matter to me what you’re made of,” Jim said. “Why would it matter for our child?”

The popsicle-stick boy crashed his kite and broke it. His father picked up the pieces. That was what she wanted, someone to take care of, someone who needed her. She was too old for a flesh baby, but it wasn’t fair to build a child unless she could love it as her own. Was the body really so important?

She grabbed an armful of streamers and crumpled them, pressing the paper into a tiny ball. It was the size of a baby’s head, and the paper was soft.  She could never have the flesh child she’d always wanted, but she could have this. She could build a child to raise with Jim–a child of crepe-paper streamers; a birthday child made in bright colors, full of celebration and joy.

Caroline M. Yoachim lives in Seattle and loves cold cloudy weather.  She is the author of over two dozen short stories, appearing in Lightspeed, Asimov’s, and Clarkesworld, among other places.  For more about Caroline, check out her website at carolineyoachim.com