I make sure I’m the last to board. I want as many people as possible seated. My own seat is in the last row — this is the rule — and I move down the center aisle slowly. I always have a reason to board last and to walk with deliberation, and for this flight I am a stooped old woman.

I get one pass down the aisle. One chance to offer a human component into the universe’s cold equations of life and death.

On other flights, I look at each passenger, try to catch their eye as I move by. The ones that I do, these are the ones who will survive the crash.

Today, I look at the worn carpet beneath my feet. Or if I must look up, it is at their chests, their hands, the seats behind them. Anywhere but their faces.

I never know the exact nature of the crash until I board the aircraft — today, a 737, every one of its hundred and sixty-two seats filled. My own nature, my goal, is to save as many human lives as possible.

But as soon as I stepped from the freezing jetway onto this plane, I saw fire and smoke and the impossibly wide swath of debris spread across the rugged winter wilderness.

Those who survive this crash will almost certainly die of their injuries or exposure before rescue can arrive. So I was forced to choose: to save them from the crash, thus wagering suffering and slow death against suffering and the infinitesimal chance of rescue? Or to spare them certain anguish?

These flights – the water, or the fire, or the unending tiny scraps of metal and flesh – it is on these flights that I most feel the weight of human life.

I am nearly to my seat when the flight attendant — they were stewardesses when I began this job — tries to help me with my small bag. I let her take it and she stows it in a bin over Row 25. She smiles and says, “You could have boarded early.”

I could not have. That is not the rule.

She attempts to meet my eye, and I look away, muttering a thank-you for her help. She retreats and I continue my journey.

My pace must be steady, and my brief stop has strained the rules. I learned long ago not to break the rules.

I watch the final rows in my peripheral vision. A family occupies the row before mine — I’d seen them board early.

Mother on the aisle, little girl by the window, already leaving nose prints on the plexiglas as she watches the calm scurrying figures in insulated flight suits de-icing and performing their final mechanical checks. Baby boy in a car seat between mom and sister.

The girl squeals and I look up. And for the first time in over a hundred doomed flights, I make a mistake.

I look up and I meet the calm green eyes of the baby boy. I hitch a horrified breath and time seems to stop. Our gazes are still locked, but I see every detail of him, this child I have condemned to live. Brown corduroy pants, open-collared shirt with a giraffe on it. A thin fuzz of pale hair. In his features I can see the ghost of the man within.

He blinks once, and time resumes. I am standing still now. I desperately try to mitigate my mistake, to meet the gaze of his mother, but she’s bent nearly double in her seat, rooting in an oversized bag on the floor. Look up, look up.

But she does not look up, and the rules are clear — I can make no overt attempt to gain her attention. And now it’s too late as I’m compelled to finish my walk, find my own seat.

Both of my row mates are men. The one by the bulkhead is already snoring softly, his head against the window. The man on the aisle more than fills his seat, broad shoulders, thick neck, his knees smashed against the folded tray table. He winces each time the mother shifts her weight. He has a grown-out crew cut and large hands. No ring. He could be a mercenary, or a priest, or a programmer. I cannot know. Again, the rules. He smiles as he stands to let me in.

“Miserable day to fly,” he says. He has a deep, pleasant voice.

I take my seat in the middle. I snap the buckle and my job is finished.

With the click of the seat belt, my vision clears and I see what I have done.

The news will report a hundred and sixty passengers burned to death at impact — and two survivors. An unscathed miracle child in the next to last row, and the desperately-injured man who pulled the child from the wreckage and kept him alive and warm for thirty-one hours in the midst of a raging snowstorm.

The news will report that the body temperature of the man — Gordon, who now squirms to get comfortable in the too-small seat — showed that he died of his injuries and exposure less than an hour before the first exhausted rescuers arrived, his body curled around the baby, whom he had wrapped in his coat.

The door closes, and the flight attendants begin their passenger instructions.

Gordon stops shifting to listen. “I hate flying,” he says.

“Crashing is worse,” I mutter. In front of us, the mother finds what she’s looking for and straightens. I see her shadow between the seats as she leans toward the baby, and the baby giggles.

Gordon gives me a sharp look, then chuckles. He unzips his coat.

“You might want to keep that on,” I say. “These late flights can get chilly.”

“Yeah. You’re right.” He leans back and crosses his arms as the plane pulls away from the terminal. 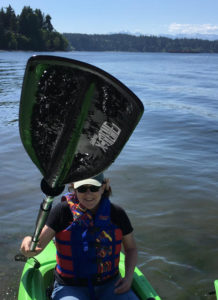 M.E. Owen writes science fiction, fantasy and crime, often in the same story. This is her second appearance in FFO (the previous was 31-E as M. Elizabeth Castle, and why yes, a lot has changed since then).

She lives on the wet side of Washington state, and when not writing, she kayaks, plays with transportation geodatabases, and occasionally throws knives (not all at once, but that would be cool).

Her short work has also appeared in Abyss & Apex, Fireside Fiction, Fiction River, and elsewhere. Her debut novel, Survival Instincts, a science fiction noir, is scheduled for publication in early 2018. You can keep up with her at MEOwen.com.