How to Confront the Sphinx Haunting Your Garden

The end of the phone line goes click and my computer terminal displays the script: “We’re offering a special deal on a two-year subscription to your favorite magazines.” My boss paces across the gray utility carpet, hand on hip. His secretary sits in the office, watches us employees through the plate-glass window, and listens in. She comes over to tell me what I did wrong, how I could’ve won the sale. After, the two of them whisper in the corner and point at their clipboards.

The timer allows a ten-second break between calls. I only sold ten subscriptions last month, but they haven’t fired me yet. I need the job. I stay even though I get summoned into the office every week. The poster on the wall in front of me promises a trip to the sunny Bahamas to the year’s highest seller. A woman in a white sarong smiles, her blonde hair lifting behind her like a thousand delicate butterflies.

“I’ll take you,” says Peter, one of the hot-shot salesmen.

I tap my wedding ring. He ignores it, winks, and returns to his spiel. I don’t know how he wrangled the seat next to mine. He’s supposed to be in the back, with the other top guys. His hair’s as long and golden as the model in the vacation photo, and he flicks it at me while he talks.

At home I help my husband turn over in bed. The nurse we can’t afford just left, and Mark smells like arthritis cream. His muscles ache from the chemo, but I love the tart menthol tang. I press my face into his neck, breathe in.

He grimaces as he tries to stay propped on his side. “How was work today?”

“My Super-Suit is at the cleaner’s.” He laughs, a dry sound, a cricket rubbing its legs.

When we first dated he loved to carry me on his back. At the fair. At the park. Around the house. He’s lost so much weight now I can hold him up for the full five minutes it takes to change his shirt. His eyes are still a pretty blue, even though they’re bloodshot. We would’ve had the cutest babies. I smooth his hair and light a joint for us. The pot will knock him out, and I’ll stay up all night beside him reading or watching TV. Sleeping through this time with him is a waste.

I’m groggy at work the next day and get called into the office. The boss and assistant face me with their arms crossed in front of their chests. We understand your situation they say, and we don’t want to aggravate it, but you need to try harder. How about ten more sales this month? What they don’t know is a line of my coworkers stand in the window behind them, waving their fingers at me in mock criticism. I try not to grin.

I sit at my station, not reading the script. Peter rubs my back a little and I twist my wedding ring around my finger. The day drags, I do not make a sale, and the beach bitch stands above me, tan and happy.

Mark’s nurse pulls me aside when I walk into the apartment. She explains he’s much worse than when she started. I should consider hospice. It’ll be easier to pay them, she says. There’s a place where I can apply for Medicaid. She loves us, but my last check bounced, and he takes up so much time and her three kids need supplies for school. Her boy is getting older. He wants name brand tennis shoes. A Playstation.

The overhead light’s on in our bedroom, a yellow bulb that casts shadows across Mark’s face, but the glow gives him better color too. Better at least than his usual gray. Mark sits up in bed, pretending to read. I’d bet he and the nurse spent ten minutes posing him like this, for my benefit. A cheap red cape drapes around him, the kind that might come in a child’s Superman costume.

“Me too.” He caresses the fabric on his shoulder, mock sexy.

It’s not long before I need to help him lie back down. I fold the red cape in four to set it on Mark’s nightstand. The costume is soft and well-worn. I wonder if it belongs to one of her kids.

I hear through the grapevine that some of the guys intervened on my behalf and threatened to quit if I’m not treated better. The boss will stop bothering me no matter how bad I suck at this job, and a quart-size mason jar stuffed full of cash sits on my desk, with a ribbon tied around the neck. One of my coworkers scribbled a goofy smiley face on the card they give me, and some other joker drew a dick. After I read the card I lose it. I run into the hallway, and Peter appears with a red bandana to wipe my face.

He wraps his arms around me, and his biceps flex around my shoulders. I let myself relax into his strong chest. This isn’t all kindness. Peter thinks there’s a place for him, later, when this is over. I should resent him for it, for hovering, but I don’t. His hair brushes my chin and it’s the softest thing I’ve ever felt. Softer even than the child’s costume in my bedroom at home.

Previously published in Passages North, March 2018. Reprinted here by permission of the author. 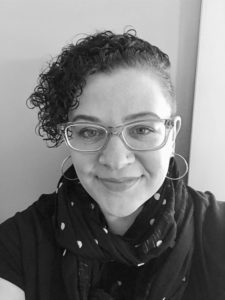 Chelsea Voulgares lives outside Chicago and is the Editor-in-Chief of the literary journal Lost Balloon. Her fiction has been published recently in Passages North, JMWW, New World Writing, and Jellyfish Review. You can read more of her work at chelseavoulgares.com or follow her on Twitter @chelsvoulgares.