She’s at the island with a knife. Body bent over the cutting board, like a diver taking leave of the land. In one hand, the golden bale of her hair; in the other, her santoku.

“Oh,” I say. “No.” A rush of warmth washes over me as I think of the softness of those strands in my fingers, on my breasts, my lips.

“It has to go,” she says, face flush with the wooden plank.

“Let’s talk about it.” I edge a painted toenail onto the kitchen’s polished concrete.

“I’ve got nothing left to say.” She stands upright, her locks coming loose, falling over her shoulders, about her waist, nearly to the countertop and the spread before her: potatoes peeled, legs of lamb skinned, star fruit freed of their browned flesh. In the orange glow of the hanging pendant, everything looks sour.

“You don’t want to do anything drastic.”

“I do,” she says and swipes the blade from the board.

Two years ago she lived with a man, a video game developer who ate lots of take-out. That first night she came here, she built sashimi salmon roses, a beautiful, delicate dish I couldn’t stomach. We called for pizza instead, inhaled it at the island, and she laughed and said I reminded her of him. Then she coiled her hair like a snake and kissed me below the ear.

Now she stares at the knife, swirls it above the wooden plank, like in a magic trick. She says, “Think of it as a reduction. I’ll be a more concentrated self.”

“That’s it exactly.” She raises the blade, light glinting off its fine, flat edge.

Here is what you have to know: three weeks ago she walked out of Paradiso with the pastry chef, a rail of a black woman wearing dreads, who climbed on her bike and rode away. The night swallowed the engine’s groan. She locked the back door, then lidded the garbage cans. It was late, almost one a.m., and as the sous chef, she’d closed the kitchen as usual. The wisp of a moon was tucked into a corner of the sky; the air was stiff and cool as a drink. Under a dimming streetlight she stopped walking, un-tucked her shirt, shook out her braid. Then, from behind—the way a sound comes at you—he threads his hands through her hair and twists, slips it around her neck. Holds. Like a rope. Drags her from Smallman down a side street, behind a warehouse, presses her to the hood of someone’s car. She can’t scream, can’t even breathe. And her knives, like gemstones, wrapped in cloth in the knapsack at her feet.

Empty-handed, she walked back to the soft light of the loft alone and shed her clothes in the hallway. The only mark was her own: burns in the flesh of her neck.

“It felt like a carving knife,” was all she said then. In the morning, I went back, but her bag was gone. How can you protect me? she doesn’t say now.

“I don’t know,” I confess, on my knees, pulling these pieces of her in around me, gathering them up in my fingers, chunks as thick and pale as overdone fettuccini, my face buried in their dampness, in their scent of gardenia and garlic, their softness piercing, a sharpness that flays, that peels me back layer after layer and leaves me hollow and heaving at her feet.

Previously published in A Room of Her Own Orlando, 2011, and The Los Angeles Review. Reprinted here by permission of the author. 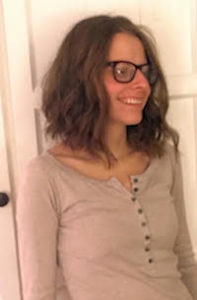 Ashley Kunsa‘s work has appeared or is forthcoming in numerous print and online venues, including Pembroke Magazine, Tahoma Literary Review, Bayou Magazine, and Roanoke Review. She has been awarded the Orlando Prize for flash fiction by the A Room of Her Own Foundation and tied for first prize for the Eastern Iowa Review Experimental Essay Award. She holds an MFA in fiction writing from Penn State University and is currently completing a Ph.D. in English literature at Duquesne University in Pittsburgh, PA, where she lives with her husband and son. Currently, Ashley serves as Assistant Director of the Writing Center at Duquesne and leads a creative writing group for student veterans. She is at work on her first collection of stories. You can find her online at www.ashleykunsa.com.