* From A Brief History of the Sjöberg Portal

The precise date and time of the appearance of the Sjöberg Portal is indeterminate, as Ms. Marta Eriksson, on whose property it appeared, noticed it only by happenstance when, upon peering out her study window, she saw the back end of her sheep (Ludvig)—and only the back end.

Sjöberg had appeared when my parents were in their late thirties. We were Gen-P: born post-portal, so it just was what it was, but my dad’s generation was enamored with it (mom maybe excessively, I surmised from my aunts’ hushed talk). Every night at bedtime, eyes shining, dad told me a story about a different world that existed on the other side. It was in Sweden, and we were in Oakland, but the way he talked about it, I felt like I could open my closet and step right in. I asked him, once, to tell me about a world where my mom was alive—cancer had taken her by then. He told me, instead, about a world without shrimp.

* The portal was located at 63°46′N 20°03′E, in Djäkneböle, Sweden, population 161. There was nothing special about this location. A new field of scientific inquiry was established which posited that portals have appeared in our world frequently, merely in unreachable places (e.g., below the earth’s surface). Physicists (and novices, e.g., those on shows such as “Portal Chasers”) seek portals by measuring energy levels, fields of light, gravitational pull, etc.

He was a single dad, overbearing in a charming kind of way. He often misjudged situations the way that withdrawn people do. But he gave me everything: shelter, food, love. A kidney, when I needed it. I worried about him, though. Even as an 8-year-old boy, I could see he was lost—always looking vacantly out open windows or doorways.

* People of various belief systems made pilgrimages. Religious masses passed into the portal, hundreds in several-hour spans. Though the Catholic Church was officially without position, Cardinal —— purportedly encouraged his flock, citing Corinthians: “For we live by faith, not by sight” and “light shall shine out of darkness.” The sick and the feeble entered the portal in multitudes. With much ceremony, several notable celebrities and heads of state entered or sent representatives (largely the latter). No accurate count of bodies through Sjöberg exists. It is estimated that, at one point, 3% of the world’s population had passed through.

When I was 21—old enough, my dad said, to decide whether to drink, fight, and drive (preferably not all at once, and not in that order)—he told me he’d lied: Mom hadn’t had cancer. She’d gone into Sjöberg. And then he asked me to go into the portal with him. I thought he was bat-shit crazy, and told him so. I told him I wouldn’t let him go, either. No matter what the scientists thought, no matter how many things governments flew or threw into the portal on chains or high-tech fibers, nothing that went into Sjöberg ever came back. Nobody knew what was on the other side. It could have been death. Another world. God. The inside of a rock at the bottom of the ocean. Of all the worlds he’d told me about as a child, I could now only picture us falling through an endless, eternal black hole.

* As the portal was located on private property, Ms. Eriksson obtained a modest fee from visitors, enabling her to live comfortably—away from the portal, which Ms. Eriksson said she wouldn’t remain close to “for all the butter in Småland” (though she stated repeatedly that she missed dearly her poor sheep, Ludvig).

Every year, on his birthday (when I’d indulge him), my father told me a story about a world on the other side of Sjöberg, one in which my mother lived and prospered. One in which she waited. I couldn’t remember her anymore, but the part of me that had longed to know her had warped into hard-edged apathy: She’d left us. She chose the allure of the unknown without us over any kind of life with us. She could wait eternities for all I cared. It wasn’t her I cared about.

* “Portal plunging” became a fad: Thousands posted smiling photographs on their social media accounts (#sjobergselfie) right before they entered, brandishing peace signs….It became the cry of rebellious teenagers: “I hate you! You don’t understand me! I’m going to Sweden. I swear it!”

When my father was 87, I fell in love for the first time, with a lightning bolt in the form of a woman. I realized that my father had never been lost. He had been searching: every time he looked out a window or into an empty doorway, he was waiting for her to walk through.

* Flights to Stockholm Airport quintupled; to address the demand, a new airport was built in Dalarö on a golf course. It is the world’s fifth smallest international airport.

When my father was 88, after he told me a story, I told him one: It had a penitent son, a tearful goodbye, a tearful reunion. It had a ticket to Dalarö Airport at the end.

* Approximately 50 years after Sjöberg Portal was discovered, it vanished. A city has risen on-site, teeming with hopefuls afraid to withdraw and miss their opportunity—again. Many theorize that the (approximately) precise closure of the portal is proof of intelligent design. Others argue that time is socially relative, and any number of years is arbitrary.

One day, I’ll go search for him among the tens of thousands of Sjöbergers mushrooming in a religion of shared suspension. I’ll be afraid to find him, and afraid not to. Until then, every day of radio silence convinces me of the story I tell myself. It takes place in a world where my mother was waiting, and now she is not. It has forgivable explanations and forgiveness. It has a happy ending. I don’t know if it’s true, but I pretend it is. 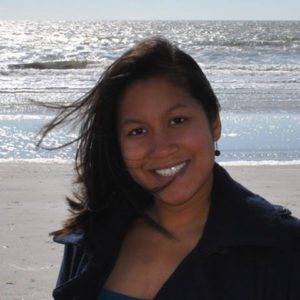 Tomiko Breland was born and raised in Monterey, California, and lives there now after a decade in the DC area. She received her BA in English from Stanford University and her MA in fiction writing from The Johns Hopkins University. Tomiko won the Ploughshares Emerging Writer’s Contest in 2014, and her work was selected for inclusion in the 2015 Best American Mystery Stories. She’s also had work appear in journals such as One Story, the Dr. T.J. Eckleburg Review, and Amazon’s Day One.

She is currently working on her first novel. When Tomiko is not writing, she’s a freelance editor and graphic designer. You can find her on Twitter @tomikobreland.