Across the Hard-Packed Sand Holly Schofield

Kelly, the dispatcher, sent the call my way, but Nick caught it too, so my squad car arrived at the empty beach parking lot seconds after his.

By the time I’d grabbed a shovel from my car trunk, he was racing down the bank, skidding in the oyster-shell scree. At five hundred dollars a pair, the alien toe bounty could be a lucrative second income for us cops. “Watch your step, Allie,” he called back, his voice full of glee.

“Alaa,” I corrected, wearily. He could have pronounced it right if he cared. But if he cared about stuff like that then I wouldn’t be running full tilt through the salt grass behind him.

It was easy to spot the dull blue of the shattered spacepod, the size of a bar fridge, way down the gray beach near a cluster of seaweed-streaked rocks.

I began to jog once I hit the hard pack. One foot after the other over this seemingly endless stretch of northern Washington coastline. Fleeing from Syria, sliding into America under the wire, becoming a naturalized citizen, qualifying for state trooper, my personal foot race never seemed to end.

And then the Veldars had come.

And kept coming. And coming.

I slowed, my bad knee flickering with pain. No hurry now. I’d lost.

And so had the Veldar.

The alien, slightly larger than most, squatted next to a rock in shadow, its face-tendrils taut. Translucent down to lean gray bone, like a jellyfish that had swallowed a miniature Halloween skeleton.

I jabbed the shovel upright in the sandy muck.

The alien raised a stick-like arm and then let it fall. Did it know what Nick was about to do?

Nick’s shirt was still tucked in and his fake sandalwood odor indicated extra-strength deodorant. Maybe I could work with that.

“Have fun,” I said, stepping back. “Last time I shot a jellyrat this big, the guts stained my uniform. Even drycleaning didn’t get it out.”

He laughed uneasily. “Hey, five hundred dollars covers a lot of drycleaning. And, remember, you officially caught this case. Don’t try to weasel out of the paperwork.”

I snorted and took another step back. “Damned paperwork. Tell you what. You get the toes, and I’ll dispatch the jellyrat afterwards. And I’ll bury it. But only if you do the friggin’ paperwork for me.”

A jerk of his head. “What, cut ’em off while it’s alive? Seems kinda cruel.”

“Shift’s almost over. You can get to Sweeney’s in time for Happy Hour. And it’s not like the ‘rats feel any worse pain than a cockroach or something.” I held my face tight and kicked the Veldar in the kneecap. It deflated into the muck and moaned like a ghul. I shrugged. “And I’m in no hurry. I don’t go to mosque until sunset.”

Nick grinned. “Deal!” He drew out his bowie knife and sliced off each bulbous pinkie toe in turn. The Veldar screwed up its many-wrinkled face but only moaned once more. I tasted bile but held it in.

He stuffed the glistening toes in a sandwich baggie. “Next jellyrat gets called in, we can do this again, if you want, Allie.”

“Sure.” I began to dig, sending grit, muck, and seaweed flying.

Between shovelfuls, I watched him trot away. I’d have to time the gunshot carefully.

The Veldar lay clutching its bowling-ball belly–like the malnourished toddlers back in Turkey. Drying gel clung to the two stumps on its narrow feet. Tired, yellow eyes stared at nothing.

After a few minutes, I drew my pistol. Nick should be almost out of line-of-sight.

The Veldar watched me carefully.

I aimed straight out into the ocean and squeezed the trigger.

The retort made the Veldar scoot back against the rock.

I drew out my blackmarket English-Veldar phrase book and flipped through it. War. Enemy. Run. We humans might not understand the reasons behind other alien races invading the Veldars’ home planet or how the Veldars could keep stealing motherships full of thousands of these spacepods, but some of us understood the fallout. In the tent camp in Turkey, Baba had massaged my shrapnel-scarred calf muscle while he pointed out words in his little green Arabic-English phrase book. Soldier. Injury. Lifeboat.

A blank look in its yellow eyes.

I sighed. This could take hours. Maybe I should just drag it to the squad car without its consent. Like border guards had grabbed seven-year-old me. Damn it all, anyway! I ran a finger down the page. “Tennin bran?”

Familiar, perhaps, but not its native tongue. I flipped a few pages. “Vronah kro?”

Ah, that was it. I made a mental note to tell Kelly to tag this one as Veldar XII in the underground database. “Kravv voolah,” I pronounced carefully. Don’t worry.

“Vrahhah?” it croaked. By now, I knew that word by heart in several languages. Safety?

“Hrran,” I said. Yes. It was sort of true. Kelly and I, and a few other folks scattered across the Veldars’ vast northwestern drop zone, tried hard to make things safer. Sometimes, we succeeded.

The Veldar tendrils slackened in relief.

A few more minutes of shoveling and I’d mounded a plausible gravesite. Tonight, I’d drive to Everett and drop the Veldar off at a safe house so it could begin yet another journey.

A cold wind had sprung up and clouds threatened rain. I lifted my burden awkwardly, bracing my bad leg against the rock. The Veldar breathed the odor of burnt raspberries into my neck. I half-smiled, feeling better than I had all day.

I hunched to protect us both from the wind and began the long hike to the parking lot.

Previously published in Writers Resist, 2017. Reprinted here by permission of the author. 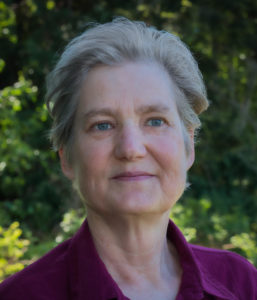 Holly Schofield travels through time at the rate of one second per second, oscillating between the alternate realities of city and country life. Her short stories have appeared in Analog, Lightspeed, Escape Pod, and many other publications throughout the world. She hopes to save the world through science fiction and homegrown heritage tomatoes. Find her at hollyschofield.wordpress.com.