Marcie’s Waffles Are the Best in Town

The Man in the Basement

I Found Solace in a Great Moving Shadow

Norwegian Waffles (For Weekends, Before or After the Apocalypse)

What Merfolk Must Know

Anna Yeatts: Congratulations on publishing “I Found Solace in a Great Moving Shadow” with Flash Fiction Online! Tell us the story behind the story if you will.

Brontë Wieland: Thank you! I’m honored to see my story find such a great home.

“I Found Solace…” has its genesis in two unrelated, but integral, moments. I was flying to Madrid from Chicago after a short visit home. There’s something magical about soaring seven miles above the Earth’s surface that makes my brain go into overdrive. I was reading but was continually forced to set my book down to scribble in my notebook as phrases and ideas and scenes were popping in and out relentlessly. I was thinking about the drone of the jets and how some people find it obnoxious rather than inspiring and I wrote, “The chirping of mechanical birds is ambience to some. To me it’s Brahms.” That got the story kicking in my head, but I still didn’t know where it was going.

Then, about a week later, I was reading a section of Peter Barry’s Beginning Theory where the author was discussing how language constitutes reality. At one point, discussing a train to Paris, he points out, “nobody will remark, ‘There goes the 8:25 to Paris’ if a flock of pigeons emerges from under the station canopy.” Of course I was like, “Oh yeah, well, what if I did.”

So I had the opening and closing images. From there, things developed naturally.

AY: Within this story, we have the nats, those without physical augmentation, versus the ‘planters, those who have had the augmentation transplants. The difference in their sensory viewpoint is enough to spark unrest that verges on rebellion. What inspired this political backdrop?

BW: I sincerely hope readers don’t interpret this as a cautionary tale about technology in our lives. That’s not what I want it to be. That ground has been covered thoroughly and I’m not trying to add to the conversation.

Instead, the politics of this story were the product of observing the social and political environment in the United States over the last five years. First we had the Occupy movement, then in Wisconsin there was unrest about the governor’s union-busting, and recently we’ve witnessed the rise of #BlackLivesMatters following a string of police murders committed against Black Americans.

Watching these protests and taking part in them made me think about the power the American government holds over the people and over information. The political background of this story was borne from the heat of these events. I wanted to explore our perception of safety and the validity of what we think we know.

AY: I adore the voice you’ve created here. The use of onomatopoeia combined with a Clockwork Orange type of language creation is simply stunning. How did you find this voice? I’m sure it wasn’t just sitting under a park bench waiting for you.

BW: I’ve never been compared to Anthony Burgess before, and I’m not complaining!

The voice was actually sitting on a park bench waiting for me. When I wrote the first line on the plane, I was thinking about a homeless man driven happy-mad by the incessant chirping of little mechanized birds, and the voice grew from that. I wanted him to be rambling, occasionally confusing, and totally blissful about these creatures that were a nuisance to everyone else. He saw beauty where no one else could. What would he sound like? “Nats,” “’planters,” and “v. parks” came naturally because they were a focal point in the universe. However, the onomatopoeia was a challenge! I spent a lot of time walking around town making bird noises at myself.

It’s a lot of telling my friends and roommates I can’t do anything because I need to write and then checking my phone until I get so frustrated that I open my word processor. That’s never where a story starts, though. Usually ideas come to me when I’m teaching or riding my bike. I repeat the words and ideas over and over until I can stop what I’m doing and jot them down in the notebook I never leave behind.

I break most of the established rules. I can’t help it. I don’t write every day and I constantly edit as I go. Maybe it’s a lack of discipline, but no other method works as reliably. A story takes two to three weeks for a first draft.

AY: What draws you to short fiction?

BW: I love writing short fiction because I can experiment with low risk and high reward. It’s a great way to learn what I can and can’t do on a sentence-by-sentence/word-by-word basis.

I love reading short fiction because I can see the risks my peers took and learn from their successes and failures.

AY: For readers not familiar with your work, how would you describe your style?

BW: I assume most readers will be unfamiliar with my work. I have only one other story out at the moment at Hypertext Magazine (I promise more in the near future).

I feel like self-describing my style is really just telling you what I hope my work reads like. Let’s see. I write a lot about language, culture, and storytelling, almost exclusively in first person. That’s because my main focus has always been voice and I love being inside a tangible narrator’s head.

I’m usually writing something speculative with a literary bent. Whatever that means.

AY: You currently live in Spain. How has your time there affected your writing, either stylistically or thematically?

BW: Living in a community that speaks a different native language than you permanently changes the way you use and view language, I think. Teaching especially has altered how I use English. The result has been quite beautiful, because I’m thinking about grammar and sentence structure differently and more freely than ever before. My ability and addiction to playing with language has grown immensely.

Thematically, I’ve found myself writing a lot more about speakers of other languages or of English learners. I also find it hard especially now to not think about colonization in my writing. Even just as a background or invisible force. I’ve lived in two of the world’s countries with the most prolific and vicious history of colonialism, I see its effects daily. It feels irresponsible to not consider them in my work.

AY: And then there’s the inevitable question. Do you have novel in the works?

BW: Loaded question. Conceptually, yes. On paper/computer, no. I’m knocking around a couple related short story collections and a novel idea. I’ll be starting an MFA in Creative Writing and Environment in the fall, so novel-length works are on my mind. Expect to see one eventually.

AY: What else about you might surprise the average reader?

AY: Final question, how do we keep up with you on social media?

BW: You can follow me on Twitter: @BeezyAl. Occasionally I blog about the books I’m reading at brontewriting.wordpress.com. 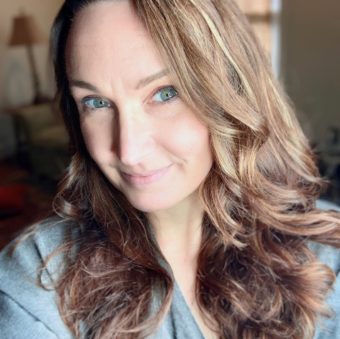 Anna Yeatts is the Publisher of Flash Fiction Online. Since Flash Fiction Online is a free magazine, she spends a great deal of time over at Patreon, trying to drum up enough money to keep a free magazine in business. But she appreciates all the readers and supporters (including the world’s most amazing staff of editors and slush readers) who make FFO a reality every month.  Anna writes in that nebulous overlap between genre and literary works where offbeat, surreal stories are born. Her short stories appear in Cicada, Daily Science Fiction, Mslexia, Drabblecast, PodCastle, Orson Scott Card’s Intergalactic Medicine Show, and Penumbra among other publications. When not writing, Anna wrangles two wonderful children, two matching cats, and a German Shepherd who doesn’t believe in weekends. Follow her at Patreon or on YouTube.