Elise goes into the woods behind her house and falls over her dead grandmother.

Elise sneaks into the woods behind her house and trips into the loamy concave of a grave the forest has sucked back beneath her skin. The crude headstone tells Elise that Mary Ann is buried here. No: the stone and its name are half-swallowed by moss and Mary Alice is napping in black dirt beneath Elise’s knees.

Elise goes home and says, “I found Grandma in the woods.”

Mother ties her apron strings too tight. Her hands are calloused and smell like basil and thyme and she strikes matches with switch blade flicks of her bony wrists, touching the flames to twisted candle wicks. “Like hell you did. Stay in the yard,” she tells Elise; there is no please implied.

“Keep that junk out of my house,” Mother says. She has a brown cat that doesn’t like thunderstorms or Elise or humans, and it winds through Mother’s ankles like silk as she brings water to boil on the stove.

“Okay,” Elise says. She tucks her bag in a corner of the garden shed between rakes and a chainsaw with gummed-up teeth. In her bedroom, she digs dimes and fifty-cent pieces and two-dollar bills from under her pillow; in the kitchen, Mother tends softly to plants in terra cotta pots.

Later, but not much: “Get back before the rain comes,” Mother yells at Elise through the screen door as she picks her bike up from the ground.

“Okay,” Elise says. She bikes to town, and in Walgreens the boy at the register is covered in spiraling tattoos that nobody notices except under flickering fluorescents. His name is Adam, or maybe Prometheus. He doesn’t wear a nametag. He doesn’t need one. “There’s a body in the woods behind my house,” Elise tells him.

“Have a good evening,” Prometheus drones as he puts Elise’s receipt in the bag.

She beats the rain home by seconds. Mother hums and stokes a fire in the hearth as Elise takes a fat white candle from the kitchen drawer and a pair of scissors from the bathroom cabinet, and when she leaves again with her Walgreens bag in one hand the slam of the screen door is lost in a crack of thunder. She takes her burlap bag from the garden shed. She goes into the woods.

When she returns, her socks are muddy. She stands dripping in the unlit kitchen. Mother sits cross-legged on the counter with her hair loose and the cat in her lap. Her eyes glitter in the darkness. “Go,” she says, very very softly. “To. Bed.”

The dawn is still grey and drizzling; the house is clammy and chilled. Elise pads into the kitchen where Mother clutches a mug of tea to her heart and leans against the counter and regards Elise with a concoction of disappointment and all-encompassing fury.

An old woman sits at the table. What hair she has is white and dirty, as is her wrinkled skin. The cat purrs under her ashen fingers and when she snaps her head approximately a hundred and sixty degrees to track Elise with pale eyes, dusty pearls click at the hollow of her throat. She doesn’t blink. “Good morning, dear,” she rasps. 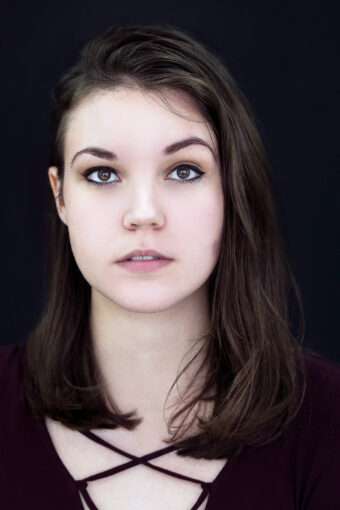 Katie Piper is a Chicago-based writer and performer and a recent graduate of the University of Wisconsin – La Crosse. When she’s not drinking coffee (and sometimes while she is) she can be found haunting thrift stores and looking for magic in odd places. https://kt314per.wixsite.com/piperwrites