When I’m approached by writers new to the craft or readers looking for an example of well-written flash fiction, time and again, “Beholder” by Sarah Grey is the story I recommend.

There are no world-ending catastrophes or serial killers lurking beneath the stairs. But some stories don’t need to jump up and down to get our attention. Sarah Grey’s “Beholder” is a small, quiet story – technically strong, beautiful in its prose, and focused on the smallest of details.

The resonance in this story never fails to knock me on my heels. “Beholder” works, not because our emotions are skillfully manipulated, leaving us feeling used and cheap, but because we recognize the genuineness of a mother’s love – a small, anonymous act of kindness to a stranger.

I dare you to read “Beholder” aloud and not be moved.

The girl behind the counter is a waif with mottled cheeks, swaddled in a blue barista’s apron.  Her nametag, scratched half-bare, tells me only that she is a trainee.  She offers me a timid smile, thin sparkle-glossed lips closed tight.  She wears augmentation lenses, red plastic frames that glitter, a cheap pair that clash with her yellow blouse and leave her looking like a deflated circus tent.  Through them, she squints at me, perhaps seeking common ground, but more likely gauging the level of customer service I’ll expect.

She can’t read my traits, though.  I am a private person; I do not relish the nagging chime of new comments added to my cloud.  I pay a generous sum to a restriction service each month.  In return, my data is viciously guarded, bolted and buried like sacred gold.  Beyond my physical appearance, all this girl can know is that my name is Maria, that I am fifty-six, that I am an equity partner in a local law firm.  She will also see a blink to my charity, founded and named in my daughter’s memory.

My own lenses are Italian—brushed platinum frames with comfort-molded earbuds and a soft rose tint that cools the cafe’s bright fluorescent lights.  I blink visuals on, hoping to learn the girl’s name, and an avalanche of words and images engulfs her.

Murmurs of impatience grow from the line behind me as I stand, wordless, struggling to absorb it all.  Her name, in pink glittering script, is Hannah.  She is a Cancer, she is sixteen, she has a dog named Christo.  She saw a romantic comedy at the multiplex downtown last night and rated it four of five stars.  Her latest blog post consists of clumsy poetry and dim lense-snapped photos of wilting trees.  She has revealed every soft cranny of her being, her heart and hopes and passing minutes of her day, like a flock of bleeding prey laid bare to the world’s sharpened teeth.

But Hannah herself, pets and poems and star charts, is a mere wisp behind by her trait cloud.  It swarms with the judgment of her peers, settles on the seams of her blouse, gnaws at her round cheeks.  Some call her shy, quiet, withdrawn.  Most have agreed, in ragged fonts and misspellings, that she is ugly, stupid, disgusting.  The consensus is that she is weird, and the word hovers like an imperious hive queen above her.

She is underage; her parents could shield her from this cruelty.  Perhaps they are too absorbed in responsibilities, in vital imperatives, and have forgotten, momentarily, that they have a child.  Perhaps she has succumbed to pressure-cooked youth and begged them not to interfere.  Either way, old cracks in my heart open wide.

I blink visuals off and her cloud vanishes.  Without it, she is just a girl, her lank hair framing a forced smile on a face paralyzed by hurt.

The line behind me hums, impatient.  I offer her my warmest tone.  “Large coffee, please.  Cream, no sugar.”

She nods, silent, and reaches for a cup high atop a stack to her left.  It sticks; she yanks with both hands.  The tower leans, slows, and finally collapses.  Cups shower the tile floor, bouncing toward polished tables and the feet of waiting customers.  The hum swells to an irritated grumble.

A wiry man in a pressed shirt with rolled cuffs races out from behind cappuccino machines and boxes.  His eyes are narrow and his jaw is clenched.  “Hannah, come here immediately,” he says.

Hannah’s lips tremble.  She follows him.

In moments I have my coffee, steaming and fresh and free of charge, with a shining gift card for a free sandwich.  “To compensate for your inconvenience,” the wiry man says.  His lenses have polished silver rims.  I blink on visuals and learn that he’s Martin, age twenty-seven.  His peers deem him thorough and efficient.  I can blink a review of his performance, if I’d like.

I don’t.  Instead, I thank him and leave.

Outside, the sky is dank and chill.  Hannah sits on a curb, nose red, eyes flooded beneath plastic lenses, green crocheted sweater pulled tight over her yellow blouse.  Her apron is gone.  She sees me step onto the sidewalk, flinches, and stands to leave.  A new word, a jagged bite of faceless corporate font, has settled on the fringes of her cloud: incompetent.

She hurries up the street, away from me, adjectives trailing.

I blink up comments and whisper a word beneath my breath.  It is one I have wished, so many times over so many cold years, that I had spoken to my little girl, when she was Hannah’s age, when hearing it might have saved her life.  I blink my choice of fonts, and send it away.

I pay a premium for designer lenses.  My comment data flies fast and anonymous.  She will hear the chime in a space of heartbeat, but she will never know its source.

Hannah stops short beneath a wilting oak tree at the corner.  She scans the intersection, squinting at tinted windshields and shop windows.  She turns my way, but her eyes move past me, seeking a more likely source.  Her expression is vexed, but her tears have stopped.

Several long moments pass before she gives up.  As she continues up the block, a smile peeks from the corners of her mouth, and she holds her chin a little higher.

Her cloud follows her, a long trail of patchworked fonts.  At the tail is a single word, tiny but present, in shimmering pink script that matches her name: beautiful. 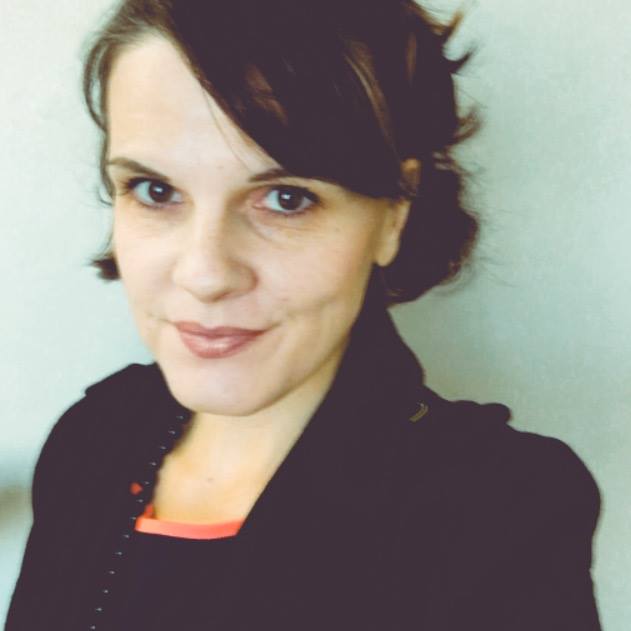 Sarah Grey’s stories have appeared in Lightspeed, Orson Scott Card’s Intergalactic Medicine Show, Daily Science Fiction, and Flash Fiction Online, and have twice received an Honorable Mention in The Year’s Best Science Fiction. Her poetry can be found in Liminality, Eye to the Telescope, Star*Line, and Polu Texni. She lives with her family near Sacramento, California, and occasionally moonlights as a lawyer.