We buried Mother in a tasteful rosewood cube. I couldn’t stop thinking that she looked like a paperweight.

When I got home, I made an appointment for some movers to take Mother’s hospital bed out of her room. Really, it was my master bedroom, but since Mother had been living there for the past three years, it still seemed more like hers than mine. I boxed up her bedpans and her kidney-shaped vomit basins and I took down the ugly crystal suncatcher she had made me put in my kitchen window. It felt like I was packing her into little pieces, but at the same time, it got easier to breathe.

I kept catching myself going onto tiptoe. Mother had napped fitfully throughout the day, and every time she’d woken up, she’d needed something.

I was coming back from the curb—trying to walk normally—when something shook itself from the side of my shoe to the little hollow place below my instep and I stepped down on it, hard enough to make me hop. I took off the shoe and shook it out over my palm. What fell out was like a chip of mulch, but warm, and smooth, and a little bit rounded, with a tiny seam. A bury-me-not. It leeched the heat from my hand.

I turned the bury-me-not over. If I held it at the right angle, I could see an outline of Mother’s eye and the curve of her cheek in the shimmer of the woodgrain. The outline narrowed, as if the bury-me-not could tell what I’d been doing. It spread itself to the approximate size and shape of a sand dollar.

Bury-me-nots don’t show up after every death, but they only show up after a death. That’s when you have to decide what to do about it.

Some people try to throw a bury-me-not away or even bury it, in spite of the name. They end up crushed by bury-me-not trees or skewered by thorny brambles, their houses smashed to rubble.

There are only three other things you can do with a bury-me-not: live with it, ignore it, or destroy it. If you live with a bury-me-not, it grows to the size of a deflated soccer ball and shoots out four thick roots it can use to drag itself around. It mimics the person you lost. And if you play along, and treat it like that person, it won’t get any bigger.

If you ignore a bury-me-not, nothing happens. It stops growing. It doesn’t shoot out roots. But you have to really ignore it. You have to put it in a jar under the sink or a box in the basement and forget you even have it there. If you don’t, it puts out all four roots and burrows right into you.

Or you can destroy it. People usually don’t. Even though it only takes one blow, it’s supposed to be too difficult. You have to catch it by surprise, smash it before it can get to you, because it defends itself when it feels threatened.

I went to the kitchen pantry, grabbed a mason jar, and dropped the bury-me-not in. I closed the jar and shoved it to the back of one of the lower cabinets. I thought about taping the door, to keep myself from opening it on accident, but that would be a constant reminder of the jar tucked under there.

The bury-me-not rattled, day and night. I started leaving the TV on to drown out the noise. Mother had left the TV blaring all day, too, after her ears had started to go. She’d said it kept her company.

The gunshot-pop of cracking glass jolted me awake. The mason jar! I grabbed a set of fireplace tongs and Mother’s lockbox, unlocking it and dumping out her tax forms and old receipts. The lockbox would be even noisier than the mason jar, but at least it would be more secure.

In the kitchen, I opened the cabinet and thrust the tongs in to grab the bury-me-not…

… and smashed its jar—which hadn’t even been cracked—against the cabinet wall.

The bury-me-not trembled and swelled, puffing and stretching until it was the size of a squashed soccer ball, glass clacking around it. I raised the tongs.

The bury-me-not shuddered and flipped itself over, revealing the shimmering impression of Mother’s wide right eye, a tremor in the cheek below it. It was how she looked when she clutched my hand to her chest after a nightmare, her heart juddering under her flannel nightgown. I would pet her hair and she would cling to me.

We had long since stopped having good days, but we’d sometimes had good minutes. That was the kicker. Not all of the minutes had been bad.

I couldn’t swing the tongs.

The seam of the bury-me-not split open, and root tendrils slithered out with a noise like slurping in reverse, needle-thin at first but thickening as they went, until the roots near the seed were as fat as my wrist.

The bury-me-not lunged for me.

“What are you doing here, Mother?” I asked, keeping my voice loud and calm. Speaking from the diaphragm.

The bury-me-not stopped, its roots still straining in my direction.

The bury-me-not lowered its roots.

“Let’s get you back to your room.” I’d said those words so often in the last year that it was like my throat was oiled for them. I gripped the front of the sink to keep myself upright and stared out my kitchen window. The eye of a dead robin stared back, its broken-necked body fractured by a spiderweb of new cracks in the pane.

The bury-me-not leaned heavily on my leg above the knee as I guided it to the master bedroom. It scuttled into Mother’s hospital bed and I tucked it in, arranging the covers gently around its twitching appendages. 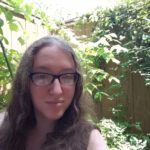 Katherine Heath Shaeffer carves out time to write when she’s not working at her day job as a narrative designer — which mostly involves more writing. She lives in Florida with three excellent cats and one equally excellent boyfriend. Her work has appeared in Daily Science Fiction, as well as a few other places. She toiled as a graduate student for quite some time before earning a PhD in English, for which she once wrote a dissertation on alchemy in sequential art. Her academic areas of interest include medieval and early modern literature, popular culture, and comic books. She is a graduate of the 2017 Odyssey Writers Workshop.