A Plea for a Haunting

The night before Eli’s birthday, his mother made him watch as she jabbed a mop in a bucket and nodded toward the kitchen floor. She told him not to move. “Poison,” she said. “Poison, poison, boy-son.” The only light was the window’s moonlight and a bare bulb swinging in the pantry.

“But I… I just… Water,” he said. His tongue felt like a wad of rag, dry and thick. He made a motion like tilting a cup, his hand trembling, jerking, bumping his lips.

Just hours before, he’d been giggling with Aaron Pax in the clearance aisle at Dollar General. Against his mother’s initial tsk of protest and later head-shaking murmurs, the words sin and Devil slipping from her lips, Eli spent money that’d been in a birthday card from his aunt on two sets of plastic vampire teeth: one for himself and one for Aaron. He’d hesitated, thinking she’d say no, but the teeth were 75-percent off and besides, she didn’t say the word no, and besides, Aaron was there. Aaron felt safe, like the olly olly oxen free of hide-and-seek, like a sun-warm metal ladder in the deep end of the pool.

Each boy popped the teeth straight from package to mouth once they were in the car. Eli scooped his mother’s cardigan off the seat, draped it over his shoulders like Dracula’s cape.

“I vant to suck your blood,” Aaron said, fingers curled like claws, pantomiming a lunge at Eli’s neck.

“I vant to suck your stinky toes,” Eli countered, kicking at his heels.

Then Eli said, “I vant to suck your weenie.” The car skidded sideways as his mother slammed on the brakes. Cold dread clutched Eli’s belly and the words sorry, sorry, I’m sorry tumbled from his lips, but it was already far too late.

She didn’t say a word as she returned Aaron, confused and apologizing, to his home.

A deep silence wrapped around Eli as he watched Aaron’s house grow small in the rearview mirror. His mother let the turn signal flash exactly three times as she neared each corner, her hands like the gears of a machine as she turned the wheel.

The mop came up drenched, dripping. She moved it across the floor in circles, muttering to herself in rhyme. After every third circle, she made a diagonal slash.

Eli asked her why the floor was poison. “Because the Devil licks his feet,” she said. “Sucks… sucks… his stinky toes.” She hissed as the last word slipped from her lips.

He wiped at his eyes and nose. Snot followed his hand across his cheek.

She dropped onto her bottom, slid back, her pants sopping up a yellow smear of the stuff she’d been mopping across the floor. If she noticed, it didn’t show in her eyes.

Something—a twisted imp, hissing, grinning—tried to shape itself in his head as she stood and returned to her work.

She stared at him, her eyes aimed low. “All sin starts there,” she said, barely above a whisper. “Right there. Exactly there.” Eli closed his knees. He pulled them to his chest, wrapped his arms around them.

He worked on the shape inside his head, tried to see until he could see. In the darkness. Beyond the spiraling mop and the sweat dripping off her forehead. A foul imp, a grinning imp, clutching his calf as his tongue traced the length of a foot, then lingered between each toe. His eyes locked on Eli. The Devil winked once, his tongue dangling down like raw liver. It was split like a snake’s, that tongue, and with it the Devil lapped up yellow trails of poison. Circle, circle, circle around each toe. Then a slash, down and across the bottom.

“The Devil licks himself,” his mother said. “He touches himself. Pulls on himself. And he knows. The Devil knows when we do these things too. He knows. He watches us. Slips inside of us. All sin starts there.”

Eli closed his eyes, then opened them just enough to let the shadows in, keeping the Devil balanced inside of him between her words and the slosh of the mop. A Devil whose toenails caught the moonlight as he licked them, leering. Long, twisted nails, sharp and ragged. Black with rot. Dripping poison.

“It’s just you and me now,” his mother said. “Foul and nasty. Stinking beast. You’ll see.”

She weighed his words in silence.

Then, finally, she nodded, leaned the mop against the refrigerator, and smiled.

She closed the distance between them and knelt before him. Then she pulled him close to her, an arm around his back, a hand on his head, pressing him close to her heart. 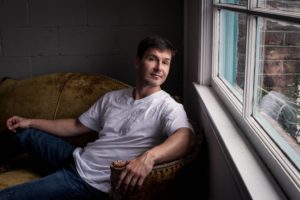 Jason A. Zwiker lives in Charleston, South Carolina with his partner Janet, two cats, and a lot of books. His fiction and poetry have appeared in All Hallows: The Journal of the Ghost Story Society, Apparition Lit, Weirdbook, Eureka Literary Magazine, and Resist & Refuse. He received an Honorable Mention in The Year’s Best Fantasy and Horror (19th ed.). Find him on Twitter @jazstory.