Soon as Sobek walks into the laundromat he sees Bastet, flipping magazine pages beneath a “Nile Cruises” poster in the back with that creep, Apep.

Motherfucker, Sobek thinks, scales starting to sweat at the sight of her. Really?

Bastet doesn’t even look up from her glossy, like she got no idea Sobek just walked in—except that tail won’t stop twitching and for all she bitches about lioness this, lioness that, she’s pretty as a pussycat pushing a canopic jar off a damn table waiting for him here.

His scales shift and crackle at the thought. Just don’t look at her, man. Play it cool.

Apep nods his serpentine head, sly, like snake or crocodile, they’re on the same page, like he ain’t just waiting for Sobek to fall off the face of the earth, and even better if Bastet’s the one to push him. But kitty’s still got a taste for croc.

Sobek fumbles for quarters. The laundromat’s empty. He refuses to be the first to speak. He’s a goddamn god, king of the fucking Nile.

But you know what they say about cats. He peeks a furtive glance at Bastet. Dig those claws in, bring you back home just to drop you on the doorstep playing dead for somebody else. Cold-hearted killers. Felines, man. Ain’t good for guarding nothing but their own skins. Pussy don’t even like getting wet. What was Sobek thinking?

But she’s still wearing that necklace—the eggshell circle from whatever dark waters Sobek crawled out of however many millennia ago. He was real sweet when he gave it to her too. For all the millennia I’ll love you.

Doesn’t matter, man. His tongue’s dry as acacia bark. Where the fuck are those quarters? Like hell you’re gonna tuck tail runnin’ out of a laundromat, he’s telling himself. Like. Hell.

She’s looking over now, not even pretending with the magazine. She come just to make him suffer, really? Ain’t she got better things to do? Protect some tombs?

He finds the quarters and starts stuffing linens fast as his webbed hands will let him. Get in. Get out. But not because they’re here. Not cause he has to. Sobek’s an important guy—places to be, right? He’s not avoiding nothing. And, just to prove it, why shouldn’t he say the first word after all?

“Hey, Bast, is that you?” Deep and throaty. He’s not puttin’ on a show, you kidding?

She’s not having it. Doesn’t even bat an eye, just keeps those black slits trained on him. “Been a while,” she purrs. Won’t come forward, magazine open to some model decked out in leopard-print dress and snakeskin boots. Is that a message? Last he checked, kittens like her snapped up snakes like Apep for a living. He can’t be sure though. Feels his throat getting hot and doesn’t know where to look.

“Guess so. Time flies, right?” Just sound natural, man. Chill. He turns to slide the quarters in like he ain’t sweatin’ wanting her to walk on over. A little closer. Any closer. He can’t keep track of his quarters. They rattle to the ground and he flushes.

She’s not moving an inch. Not saying a word. Apep’s snickering, that godforsaken forked tongue bobbing in and out. “You keep that fuckin’ thing in your own damn mouth,” Sobek growls.

“What the hell you talking about, SOB-ek?” Apep says, eyes slit, still snickering.

But now Bastet’s grinning. “Boys,” she says, just to hear herself purr.

Just so long as that snake’s not putting his tongue where it don’t belong, Sobek’s thinking, but didn’t he said he’d play it cool? C’mon. Priestess over there said she ain’t yours anyway. Got to get free of this kitty cat; she’s no good.

“You got a problem?” Apep slithers over like he wants nothing more than to go reptilian mano a mano. He glances back to Bastet and her teeth glitter, smiling. This is what she came for. She twists the necklace Sobek gave her. His chest tightens.

Bastet finally stands and struts toward them, body practically humming. “I never take it off.” Her eyes flash between them. Apep’s puffing his slimy scales waiting for Sobek to make the next move.

Why’s she gotta be so beautiful all the time?

She reaches toward Sobek like she ain’t never clawed nobody to death, ain’t plucked no hearts out still beating.

He ducks to snag his coins off the floor and thrusts them into the machine. One short.

“I said, do you got a problem?” Apep hisses.

He’s not watching the line of her arm to the nape of her neck, or her back arching, or the curve of her lips as she unclasps the necklace. No way. Not him and not Apep neither. Nope. Sobek regularly feels like he can’t breathe. Like his heart might explode or the Nile start spilling out his eyes.

She hands the necklace to Sobek. “It means the world to me,” she says, waiting for him to play along all romantic. Her eyes flicker between him and Apep. Pussycat’s just looking for trouble. Sobek gets it by now.

“Funny.” He traces the curve of the eggshell. Bastet’s close enough to touch, smell the riverbank like it’s baked into her skin. He laughs and hopes they don’t hear every lonely night gurgling behind it. “I used to think that too.”

He pulls the pendant from the chain and slips it into the coin slot. The washing machine kicks on, starts thrashing like a well-hashed argument. Bastet blanches, wide-eyed, and flounders for words like dry land. Apep can’t help but start snickering again.

Sobek, though, he’s suddenly feeling right at home in the cool wash of relief, smiling a little as he walks back out of the laundromat. 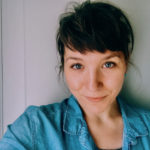 Mackenzie Suess is a writer and consultant based in Denver, Colorado. Her writing has been published in Typehouse Literary Magazine, the Denver VOICE, and elsewhere. As an Engaged Arts & Humanities Scholar at the University of Colorado, she’s developing curriculum which examines the intersections between storytelling, magic/monstrosity and mental health.