Joe slowly declares my name, as if to confirm that it really is me who arrived with the order; that it’s his partner standing there in the hallway. He’s as surprised to see me as I am him. He’s half naked, though this isn’t our home. I’ve never even been to this apartment.

I clutch the delivery bag to my belly: it’s a defensive move, though the insulated pack stuffed with meals offers no protection.

He’d no idea I’d snatched this job, that I’d donned helmet and jacket, then hopped atop a borrowed bike. It was to be a surprise: as an artist I’d dwindled; as a food courier I could contribute rent, bills, gifts. Now we were both exposed–I in bright corporate colours, he with nothing but a scarlet bedsheet wrapped around his waist.

A man with beard-shaggy face and hair-furred belly joins us at the threshold. His bedsheet is burgundy.

“Is there a problem with the order?” the man asks me. He wears a friendly grin. “I can go get my wallet.”

By Joe’s look I can see this is no flippant fling: his eyes shimmer with fear.

It takes whole seconds before it sinks in. He’s dismissed me. The worker in turquoise, the man he’d said he loved.

Anger rises from my stomach until it chokes my throat, because in truth monogamy was his idea. It was he who’d insisted on exclusivity, and my hands start to shake because I would have shared–I would have–and my skin burns because there’s neither explanation nor apology in this paint-peeled hallway. There’s just the liar and the lover and the delivery guy.

“Of course, sir. Let me just get your food.”

I strain the words through an artificial smile and unzip the delivery pack. The curried scent belches from the bag, mingling with the smell of sweat and sex.

Joe watches me with careful terror.

“If you could just step aside.” I warn the cheerful bearded man because this isn’t his fault, not really, and though he looks confused, he vanishes from the doorway.

First I throw the korma. The tub hits him in the chest, spluttering lurid orange sauce over his shoulders before it clatters to the floor. The scarlet sheet falls, exposing him whole.

“Stop,” he cries, but now I grasp the jalfrezi. I hurl it as he screams, as curry soaks his hair, and I can hear the beardy man behind the door, on the phone:

“–I’m calling to register a complaint–”

But I’m not done. I pop open a carton of sushi; I squeeze balled rice between my fingers.

“Stop this right now,” barks the orange-spattered man–the one who’d stroked and soothed and insisted I move in, the one who’s naked and drip-drip-dripping with sauce. “You put those down!”

“Is this not your order?” I ask as sushi rolls sail through the air: an avocado maki; a mushroom maki; an egg nigiri.

(That last one sticks and slides down his chest.)

I reach to the bottom of the insulated pack and clutch bundles of fries. Deep down I know it’s not only Joe. I know I’m angry at myself, outraged that he had wanted ownership and I had surrendered. I throw them all the same.

Greasy potato strips scatter like confetti: they cling to Joe, to the curry sauce on his head, to his arms and legs and torso. The floor is a puddle of jalfrezi-korma. Rice mushes beneath his feet as he slips, as Joe topples and falls.

Now Joe doesn’t look so superior, not now he’s sprawled about the floor, orange and sticky, with fries in his hair.

The delivery pack has one more order: I stand, poised, strawberry milkshake in hand.

It’s only then that I realise Joe is crying, not only crying but snatch-breath sobbing. That he’s been defeated. Yet whether I’ve won or lost, I just can’t know, and when he looks up at me through bleary tears, I’m no longer angry. I don’t know what I am–

–but I’m no longer a delivery guy. With Joe slumped and splattered, and with Mr Beardy still screaming from the door, I turn and leave the empty pack behind. 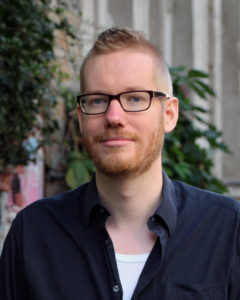 Redfern Jon Barrett is a writer and activist. Originally from the North of England, Redfern was raised in market towns, seaside resorts, and post-industrial cities, before gaining a Literature Ph.D. from the University of Wales. After moving to Berlin, they wrote the novels Forget Yourself and The Giddy Death of the Gays & the Strange Demise of Straights (nominated for a Lambda Literary Award; finalist in the Bisexual Book Awards). Redfern’s stories are featured in literary magazines The Sun and Passages North (upcoming 2019) and exhibited at the National Museum of Denmark. Their nonfiction writing has featured in Guernica, PinkNews, and Strange Horizons.