I Don’t Want to Hurt You Either Ryan Row

“And how can I help you?” he asks. He looks prim and a little tired. His thoughts wander. A hard candy his grandmother gave him as a child that he spit out because he thought her hands were ugly, and they made him think about death, and also he is tired of customers who smell his flowers but don’t buy anything. He wishes he could charge for air. Also, his daughter is getting older without knowing him. And what does that say about him as a person.

He smiles, and it confuses me. We’re alone in his small shop, which is dense with flowers and colorful rolls of plastic. His whole life first hit me in passing, on a bus, three days ago. Jitter and shake, not unlike me.

“I’ll take the daughter bill,” I say, like a stupid parrot. The flower man looks puzzled and maybe concerned. But these are automatic reactions that do not extend to his thoughts.

“F-forget me not,” I manage to slur, and he charges me for a bundle of pale blue flowers, which he thinks of as “kid flowers.”

I’m still standing there like a moron, a little mushroom cloud of flowers sprouting from my fist. People assume I have some kind of neurological disorder. They’re not wrong. But I’ve learned to think in fractions, in dashes. Electric prods of thought that keep me going like the erratic beats of a heart.

“You like k-kids?” I stammer. If a stammer was a kind of object, I would be that object.

Kids. The flower man’s thoughts bloom. His daughter in his hands, in the hospital. Newborn. Her fragility exciting him. Her tiny, soft skull and her closed eyes. And also, again, his grandmother. Making him stand naked outside in the snow. His breath making patterns in the frigid air, the complexity and brevity of which make him, even now, want to weep. And someone else, a young boy with fine hair, alone on a little side street at dusk outside this very flower shop. And also, who is this sick person in his shop with a fistful of kid flowers? He’s jumpy and too thin and has one hand balled up in his pocket like he’s holding a rock.

The flower man’s thoughts shiver in response. Grandmother again, she is a stone in his head. The hollow whistle of her aluminum cane in the air. The cracking of his wrist bone. And also the last letter from his daughter, dated nearly two years ago. The characters of her handwriting all jammed together like a crowd pressing toward him. Also, a child, splayed out on a table in the back room of this shop, breathing softly, unconscious and criminally beautiful.

“Look, I’m a good guy,” the flower man says. “And I’m sorry for whatever’s happening to you. I wish I could help you. Do you want me to call someone?”

Call God, I want to say. Call the Devil and ask him what we’re doing here. There’s a young sun outside this window, and so many other places to be. But I’m still trapped in scrambled parrot mode. Sometimes I worry that I have no original thoughts at all. It’s all facsimile and accretion. My head is just a garbage ball of other people’s discarded thoughts.

“Are you a-fraid of me? Don’t be. Do you like f-lowers?” I say, plucking the words from his memory like plucking feathers from a wing. It’s all so automatic.

The kindness of his smile freezes over. His mind is breaking down. I see the faces of many children flipping through it. Children he’s said these words to.

“My daughter l-likes flowers,” I say. I am a dirty mirror. I am the demon’s mirror, held up to the world for cheap laughs.

I have to be sure.

His grandmother’s funeral in his head. Fat white lilies hanging over her coffin like tired angels. His wife’s note on the refrigerator door. I don’t know you anymore. Maybe I never did.Holding her hand on a beach, their honeymoon, and telling her that he would never stop loving her. His daughter’s empty closet. The patch of country earth where he buries the children’s bodies after he is done with them. It’s a field covered in wildflowers, many he has planted himself. He often weeps as he digs, and kisses their toes and their cool foreheads. Also, he should email his daughter, who is already sixteen and slipping further and further out of his orbit, not unlike our own moon. Yes, he will write that email today. And beg her to come see him.

“Get out,” he says. He’s trembling, crying just a little bit. He doesn’t know what’s going on, why his thoughts are in chaos. The shop, which I think is cozy, feels claustrophobic to him. “I don’t want to hurt you.”

He doesn’t want to hurt anyone, but somehow, he still does. And I want to tell him I understand. I really understand. But I’m not able to form the words. The shapes are too delicate for the blunt tools of my mouth and my dirty, dirty mind.

And take the little gun out of my pocket and shoot him in the forehead.

A blessed silence follows in the hole left in the world by the gun. My mind feels like an evacuated city. An emptiness that feels like abandon. The flower man bleeds thoughtlessly across the floor. I place the Forget Me Not’s on his unmoving chest.

Telepathy isn’t really so sharp as it is in movies. It’s softer, and fine, and close as sharing breath. In fact, it is almost like love.

A little bell rings when I open the door to leave, and there’s an unfamiliar rush of foul city air. 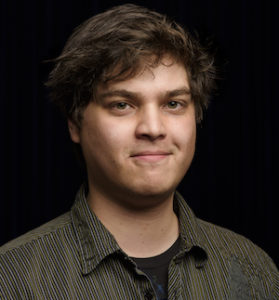 , Quarterly West, Bayou Magazine, Shimmer Magazine, and elsewhere. He is a winner of the Writers of the Future Award, and holds a B.A in Creative Writing from San Francisco State University. He lives in Oakland California with a beautiful and mysterious woman. You can find him online at ryanrow.com.