My dragon, Rolly, died. It’s all right—I’m not sad about it, whatever anyone says. I’m tougher than that. She was old and grumpy. Her time had come.

The good thing is, one dead dragon makes a shed-load of dragon meat and that is impressive in the right circles.

As soon as Rolly passed, our nearest butcher, Mrs. Gaveffel, threw herself on our doorstep.

“I’ll give you half of any takings from the meat and you’ll get no blood on your hands,” she said bluntly.

My mum and I stood side-by-side and looked at one another. Mum had a saying she was fond of: “In tricky moments, Dyna, ’tis better to talk with your eyes than your cakehole.” On this occasion, the short eyeball exchange said that Rolly had cost us a fortune in livestock over the years, and we needed to make the money back if I was ever going to get an education.

“We want two thirds, or we go to Wright over in Haverstock,” my mum eventually replied, though she hated Wright.

“Aye, aye,” Gaveffel said after some muttering to herself. “Two thirds will go your way.”

They came to haul Rolly away later that afternoon. Ten men and women came along with three carts they had rigged together and some horses to pull it all.

The hardest bit would be getting Rolly onto the carts. They asked me to help and suggested I take up position near the head for the old heave-ho, so I could be a part of the farewell.

Whatever. It also meant I didn’t have to clean out the chickens.

So there I was, when someone near the back haunches stumbled. Rolly’s body slipped forward. Instead of carefully sliding her onto the carts, we dropped her with a thud. She whacked my shoulder on the way down.

Tears came to my eyes. And once they’d checked Rolly had landed all right, everyone started up with, “Poor Dyna, so hard for you, you must miss her so much,” and I just thought, Shut up! They didn’t know the first thing about us, about the way she growled at me when I sent her off scouting or how I’d wake Rolly when she overslept, with a quick poke from the hay fork. Anyway, my shoulder just stung from the impact—that was all.

When the cart was ready to go, I went as well, to see the damn thing through.

Mrs Gaveffel had a large wooden shed at the front of her homestead where she did her butchery, but it was barely big enough for pigs, never mind dragons.

The team pulled Rolly down and left her by the door. Her skin was rough and callused; it almost looked too heavy for her frame, as if it would slough off without much effort.

I followed Mrs Gaveffel into the shed without thinking. It was clean, but smelled bloody, like musty old coins. Hooks dangled down from the ceiling. Blades were set out neatly on the side.

“Will the meat be any good?” I asked without thinking.

The first answer was a shrug. Then, “She’s old and thin so it’s likely to be on the stringy side, but dragon meat is expensive, if that’s what you mean.”

I had no idea what I meant.

“I haven’t butchered a dragon before,” came the reply, “but I never met an animal I couldn’t take apart before, either.”

That’s when I started throwing up.

My mum said Mrs Gaveffel was angrier than a dog who’d swallowed a bee. I just remember sawdust being thrown on top of the mess I’d made, being dragged out by the arm shortly afterwards, shame and embarrassment coursing through me, burning my cheeks.

Five weeks later, Mrs Gaveffel brought the meat over and showed my mother how to store it.

There wasn’t much. We got a small piece for the sake of it almost, to say we had eaten dragon, that we had owned one, that we were nearly somebodies. It didn’t make a lot of sense if you said it out loud. But that’s what my mum and I thought, glancing at each other now and then as we prepared the joint and placed it in our oven. Roast Rolly.

We served her up with sweet potato and plum sauce, and at first Rolly tasted great. And then I missed her so much that every bite was bitter. Suddenly I was crying and I didn’t know why.

“No shame in tears,” my mum commented, though I hadn’t said a thing about it. “You didn’t always rub along so well, but she was a faithful companion to the end.”

All true. But then I recalled the time she scorched a hillside of sheep before I could shout, “Whoa there!” and I was pretty sure she’d hate all this wailing.

I wiped my tears away, picked up my fork, and decided to remember Rolly the best I could, in life and in death.

It was what she would have wanted. 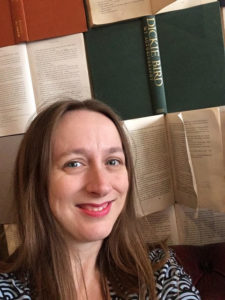 Helen French is a full-time writer, book hoarder, TV-soaker-upper, and biased parent. She also looks after digital projects (from websites to webinars) on a part-time basis. Her short fiction has appeared in Daily Science Fiction and Kraxon. You can find her on Twitter @helenfrench.