The Law of the Conservation of Hair

Errata to The Fugue of the Undreamable Abyss

Mrs. Bhatia was five when the first colony began on Mathuria. On her birthday, her father started a savings account in her name and began working nights and weekends to fund it.

She was sixteen when he got lung cancer, the year before the government mandated the use of respirators outdoors.

“Today, Delhi is uninhabitable. Tomorrow, the Earth.” From his hospital bed, he squeezed her hand and told her what he foresaw: water corroding taps; schools holding recess in giant plastic bubbles to protect children from caustic air.

Amidst her sobs, his voice remained even.

“What will come will come,” he said. “Work hard. Save. Take the family elsewhere.”

“Today was Vivek’s tenth birthday.” Mrs. Bhatia looked at her husband without expression as he walked in the door. “He’s asleep now.” The house smelled of saffron and cardamom; she had prepared penda.

“I’m sorry.” His shoulders slumped as he removed his respirator and protective suit. “I rushed home. Barely changed out of my scrubs.”

She turned away, frowning. He hadn’t exercised in months, or slept a full night, or eaten dinner sitting down. His practice was booming, though; although respirator use had decreased lung cancer, esophageal lesions were pandemic in populations unable to afford access to private water reservoirs.

And the rupees were flowing in. Finally, they had enough for one ticket to Mathuria. Vivek could travel twelve light-years away, and the expense of superluminal travel was worth it—he’d arrive in just a few months. One day, they could follow.

She imagined the three of them sitting outside, the sun warming their faces. The sky in her mind was blue like it was in the holograms at the history museum.

The day Vivek left, she strung her mouth up into a smile, as mothers learn to do. Only when she was back home from the spaceport did she drop the strings. Locking herself in the bathroom, she let out a noise that she’d last made when she pushed Vivek out—a groan, like an animal dying.

Things must have been worse for mothers, she told herself, before the development of high-coherence entangled qubit communication. These days, short messages from Mathuria arrived instantaneously; flip a qubit on Mathuria, and the entangled qubit on Earth flipped immediately. But only a few companies in the world could entangle qubits across light-year distances, and then only a few thousand at a time. Larger transmissions, like photos, still took two weeks to arrive.

The bank account was back to empty. The roof needed repairs, and the rain leaking through the ceiling smelled of acid. Mrs. Bhatia splurged on holograms anyway. They twinkled on her coffee table: Vivek as a round, brown baby; Vivek in his school uniform, the creases she had ironed paper-sharp. Vivek, leaving for Mathuria.

She paced and paced, waiting for the transmission. Finally, her transponder pinged. Even before its red light began flashing, she flipped it open and read her son’s message:

For the first time since girlhood, she squealed and jumped straight up into the air. She ran into the kitchen and comm-linked her husband at the hospital. Once she had caught her breath, she cracked open a pod of milk, to prepare sweets for the ladies at her book club. For the first time since Rohan left, the kitchen brightened with the scent of cardamom and saffron.

She could almost feel Rohan’s warm weight in her arms, see him fat and milk-drunk, touch his soft cheeks. “Rohan,” she said out loud, feeling the name on her tongue. It was a round name; round like the orb of a new, clean planet. She liked it. Now, to wait for the photos.

A few weeks ago, she had looked over the bank accounts and seen that they had enough for the second ticket, and even part of the third. In another year or two they could all be together again, somewhere better.

Her hands trembled as she hit “send,” thinking of how Vivek would take the news when his transponder beeped. If only she could see him.

“YOUR FATHER IS NO MORE. CARDIAC ARREST. ON MY WAY TO YOU — BE BRAVE”

He hadn’t seen his father in fifteen years. She hoped that would make the loss hurt less; that day to day, there wouldn’t be anything to miss.

Her bags were checked; nothing to do now but wait.

Gazing out the spaceport window, she shifted her carry-on to feel the weight of her husband’s ashes against her leg. She tried to remember eating dinner together; she couldn’t. She did remember the last time she had been at the spaceport, her family intact. Same place, different lifetime.

At the other end of the transport would be Vivek and his son. In a few weeks, she’d come face to face with the entirety of what she’d missed out on. Her heart thudded at the thought, and she began to hyperventilate.

She shut her eyes hard against the tears. She wanted to fling herself on the spaceport floor and throw a tantrum, to scream that she had been robbed; cheated of contentment by the mirage of a future elsewhere, and left holding a bag of ashes and holograms. But she had no parents left to soothe her, and tell her she’d done the right thing, and her husband was in a shoebox. So she sat there, eyes closed, waiting for the whirlpool inside her to fizzle out on its own. Maybe that was why her father had seemed so mellow, long ago. Maybe older people got angry too, just there wasn’t anyone left to tell.

“Auntie-ji.” The stewardess touched her shoulder. “You really must board. We depart in fifteen minutes.” Her voice was the perfect blend of warm and crisp, as though she had years of practice dealing with elderly ladies who dawdled at the gate.

Mrs. Bhatia stood, smoothed her white sari, and strung up her smile. 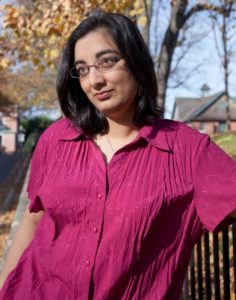 Meera Jhala has a PhD in, and is a former professor of, theoretical physics.  This is her first science fiction piece; you can find her literary fiction on the 2014 Wigleaf 50, and her poetry in Rattle and Strange Horizons.