A Hitchhiking Robot’s Guide to Canada

DO IT—TWELVE LESSONS FROM TWENTY YEARS IN THE ARTS: LESSON 8: IN UNCERTAIN TIMES

When the Stars Were Wrong

Keeping Time with the Joneses

Marko raises his first banner, a red shawl, into the teasing wind and marches behind a weathered wooden float. Brass trombones and trumpets howl across a hot, dusty world. He chants as loud as his fellow celebrants:

Marko shouts the last line the loudest. He’s supposed to love parading, but now that he’s too big to be carried, he would like for it to stop. Father says no one stops until they meet Mother Ceremonium. “Someday,” he often promises. Until then, Marko longs for winter. The days are shortest, the least parading.

In the distance, black smoke plumes from a burning skyscraper. The cleaners scramble back to the parade and rejoin the chant. Before passing this city, they’ll set fire to its largest structures and raze any occupied houses they happen to find. Dead cities of a dead world, built and broken before Mother Ceremonium’s parade began, but her message must be clear: Never slothful.

The daily parade lasts sunrise to sunset, and by afternoon, Marko is tired.

Marko leaves his father’s side and approaches the cleaner. The cleaner smiles, grabs Marko’s pretty banner, and tugs it away. Marko collapses; he’s left crying in the dust.

Other celebrants spit on him. “Sloth,” some say, kicking as they pass.

A shadow blocks the sun as Father leans over Marko. “What happened?” After sobbing Marko tells him, Father asks, “Are you listening?”

Father offers his hand. “I’ll help you up.”

Another day, another parade. They find no settlements, nothing for the cleaners to destroy, but an elderly woman falls on her face and doesn’t move. No one offers to help and the parade carries on. Most call her, “Exalted,” but a couple passersby say, “Sloth.”

Marko has heard this a thousand times, but never repeated it before. “Sloth,” he says, tasting the word.

“Exalted,” Father corrects. “Before the parade began, all were slothful. After mankind killed the world, Mother Ceremonium offered a choice—slothful or celebrant. When someone stops, they’re one or the other.” He beams. “Parading until death always means exalted. She’s like Grandfather, remember? And she’ll join him in Mother Ceremonium’s endless parade across the stars.”

Marko glances back at the woman, now obscured by fellow celebrants, and another word strikes anew—endless. Grandfather walked all his life, weary from skin to bones. Father does the same, and Marko will follow.

And the reward for that lifelong march is to continue marching for all time.

Father apprentices Marko to the cleaners. There’s no training; he’s expected to do like his fellows.

They scout ahead of the parade and find an occupied house. The slothful are caught unaware and barricaded in the upper floor while Marko and his fellow cleaners scavenge all food, clothing, and tools. When the work is done, they set the house aflame, burning the slothful with it.

It’s the worst thing Marko has ever heard, smelled, or felt.

Many burnings later, Marko finds a pair of frightened slothful cowering in a hut while his fellow cleaners scavenge the neighborhood. Fear paints their teary eyes.

Marko offers them colorful scarves and teaches the chants before his fellow cleaners can find them. They catch on quick:

Aching inside, Marko begins to doubt there’s any such thing.

“How far yet to Mother Ceremonium?” Marko asks. It’s summer, when the daily parading lasts the longest.

“Don’t know,” Father says. He’s worn now, skin leathered by sunshine, but the fervor in his eyes points at the procession, all the floats and banners ahead.

Marko looks hard at him. “How many years ago did the parade start? Was it with Grandfather? Great-Grandfather?”

Marko stops. Father steps slowly so not to be separated. A few passing celebrants call Marko, “Sloth,” but do nothing worse. He’s a cleaner, after all. He’ll return to the parade.

“There is no Mother Ceremonium,” Marko says. “We’re legs of a giant that destroys everything it touches.”

“Blasphemy,” Father says. He sounds tired. “I’ve told you, like Grandfather, we’ll meet Mother Ceremonium when the parade finds her or when we each die.”

Father seems to have forgotten at first, but then despair overtakes his face. He staggers back, eyes tearful, and disappears between passing celebrants. The procession’s tail end slips around Marko, leaving him alone in the dust.

In the distance, the parade pauses at dusk. At dawn, they march onward, but their music takes hours to fade.

Marko has been alone for months when trembling earth shakes his rooftop. Has the parade returned? If they find him, they won’t take him for one of theirs anymore. He’s become slothful; they’ll burn him alive. He rushes outside, waving a shirt over his head, a makeshift banner.

What he finds is not the parade. A gaunt colossus, all sagging skin around gargantuan bones, crawls at the horizon, radiant as sunshine. Marko loses count of its twisting legs. Ragged red banners dangle from its teeth and bits of broken floats shuffle on its back. Everything comes together now.

It is Mother Ceremonium, hungrily chasing the parade.

She’s always chased the parade, Marko realizes. Celebrants must’ve confused pursuer for savior generations ago. Cleaner burnings likely once warned, “Keep moving,” but time has twisted their helpful intentions into joyous murder. Did mankind kill the world or was it Mother Ceremonium herself? The endless parade has forgotten.

“Father?” Marko turns to follow the parade’s trail, but he’s months behind.

And Mother Ceremonium is quick. 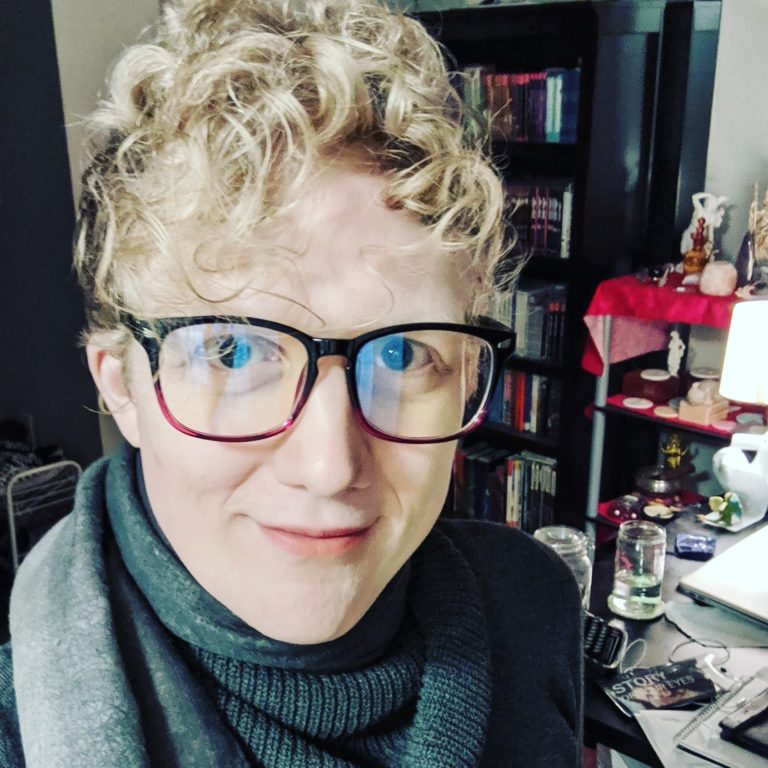 Hailey Piper is the author of horror novellas Benny Rose, the Cannibal King and The Possession of Natalie Glasgow. An active member of the HWA, her short fiction appears in Daily Science Fiction, The Arcanist, Tales to Terrify, and elsewhere. Her debut dark fantasy/epic horror novel, The Verses of Aeg, will be published by Bronzeville Books in late 2020. She lives with her wife in Maryland, where Hailey haunts their apartment making spooky noises. Find her at www.haileypiper.com or on Twitter via @HaileyPiperSays.