I snap awake and focus on a sheet of paper taped above my bed. It reads “Get Going, Lily Sandoval.” In ten minutes I’m down the stairs dressed. Move like the person behind you is catching up. I’ve done that since I was eight, when my father and I jogged around the park. At twelve I started running since he wasn’t there to stop me. Today, almost fifteen, I’ll blow the planet off its axis when I finally run the track at school.

Sitting where my backpack is dumped in the kitchen, I pull a brush through my jungle of hair. Steve hates me brushing my hair at the table, but says nothing. Almost a year since marrying my mother and he still treads like a stranger. Mother smiles, gently extracting the brush from my hand before her husband starts twitching. She sets food in front of me.

“How’s my little runner today?” Mother believes that running is a stage. If this is a stage, it’s the last stage. Nothing is more important to me. I run before school. I run after school. But today I conserve my energy because I’ll be running during school. Breakfast finished in less than five minutes, I jog to the front door. My muscles flex with anticipation. I tie up my Nike Pegasuses. Solid-black, custom. They’re just barely run-in and I need to feel them all day.

Mother pops out of the kitchen. “Can Steve to drive you to school?” Trick question, Mother. Steve doesn’t want to give me a ride, and we would both drop dead from lack of conversation. I get going.

Annie Reed waves and passes from her bicycle. Sometimes we race in the morning, but both of us have Phys Ed. the same hour. Anything between us will be settled today on the track. Once, stinging from a loss when she pedaled so hard she nearly tore off her toes, Annie demanded between gasps to know what the hell I was running from.

I told her I‘m running toward something. Impress Coach Mephton and become the first freshman ever to join varsity track. Convince Mother this isn’t an excuse to buy me a new pair of Pegasuses every birthday and Christmas.

And today, in case my father happens to return and happens to see me run, rub his face in what he’s been missing.

I won’t let the day drag. I’m at every class with time to spare, keeping my muscles from thinking they’ve got it easy. I tear through lunch to make it to Coach Mephton’s office before Phys Ed.

He nods at a chair but I don’t take it. “Lily Sandoval. I’m a freshman, running the track next period for the first time. Watch and see if I don’t make varsity.” I get going. He can say all he wants after I run.

At Phys Ed, before Ms. Zaan surfaces with her clipboard, even before anyone else has unslung their backpack, my locker is shut and I’m changed and ready. Neon orange and silver. I want Coach Mephton’s eyes to blur when he sees me go. Ms. Zaan is frowning above the clipboard. “Out of uniform, Sandoval. Navy, black or white. You know the rules.”

I stare past her. “Fail me for the day.”

Ms. Zaan walks the class out to the asphalt track. Everyone else is laughing and joking. Nobody takes this as seriously as me. Why should they? We could crawl around the track and Ms. Zaan would still hand out passing grades.

No starting gun, no ready or set. Ms. Zaan just snaps her fingers from the safety of the grass. I take off hard enough to split mountains and shift rivers. But Annie Reed is right there next to me. I refuse to accept it. She needs wheels, and wheels can’t do anything by themselves. All I need are feet.

I push harder when I loop the track for the first time. Three more to go, Annie just behind. I wonder if Ms. Zaan has dropped her clipboard in amazement yet, if Coach Mephton has collapsed at the shock.

Another lap passed. I want to look away and do more than hope Coach Mephton is watching, to know that he is. I overtake the others on the track. They’re moving slow enough to see me coming and get out of my way. I go as fast as I can now, Pegasuses practically denting the asphalt.

Right before I begin the final lap, Annie pulls ahead. She won’t beat me though. And I won‘t just pass her, I’ll destroy her.

Then Annie’s knee locks up. I only see it happen because she‘s ahead. Thoughts of victory vanish. Before she can hit the asphalt my hand is on Annie’s back and I shove her toward the grass. Annie rolls safely across, taking me and my dreams with her.

Time creeps back to normal. Ms. Zaan trots over to us. Annie smiles at me as she gently tests her leg. “You’ll live.” I tell Annie. “But see what happens when you rely on wheels? Lucky I’m faster than you.”

Annie laughs. “I was ahead.”

I try not to think about kicking her knee. Ms. Zaan, prepared to do everything except reattach body parts is already crouching over her.

The others on the track are still walking and laughing, going that slow for the rest of their lives.

At the far side is Coach Mephton, watching.

Finishing my laps now wouldn’t mean anything to anyone but me. I make varsity or I don’t. My father comes back or he doesn’t. I can’t control where other people’s feet take them. But I know where mine will go. They’ll take me across the world if I’m fast enough.

I flick Annie’s ear as I dash back onto the track. She was only ahead for a moment. Tomorrow she and I will see who’s really ahead. With or without wheels. Today, I get going. 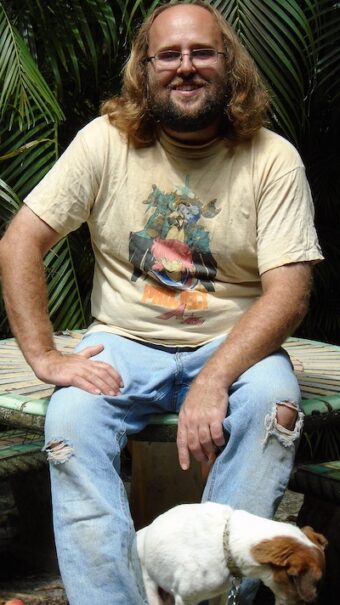 Samuel Barnhart washes dishes and scrubs toilets for a living. When he isn’t neck deep in liquefied chemicals, he writes short stories while listening to the loudest, fastest music he can find. His work has been published online in Kids ‘Magination and Slink Chunk Press, in print for Silver Pen‘s annual anthology and Fashionbula Argentea‘s anniversary anthology, and performed onstage at the Jackie Gleason Room in Miami. He sometimes blogs at sambarnhart.tumblr.com, and lives in South Florida.