FXXK WRITING: THE TYRANNY OF ONE

One sample of DNA.

One chance to prove herself and silence her peers.

Two viable ammonites eventually swim in their tank, juvenile and tiny. Their spiraled shells may be imperfect Golden Ratios, but their erstwhile association with Fibonacci’s sequence drew her to them as a child. The addition of the sequence’s last number to its predecessor to generate the next, converging on an identical ratio between each one, creates a logarithmic beauty she finds soothing.

Three mass extinctions had occurred before the ammonites succumbed to the fourth. With the planet on the brink of another, she’s certain these animals hold the key to survival.

Five times she’s reluctantly turned down Henry’s dinner invitations. She fears the fifth was one refusal too many.

Eight years she’s studied to fulfill her dream of reviving the ancient cephalopods and returning them to the dying ocean. They say de-extinction will create further problems, but they haven’t come up with alternatives.

Thirteen weeks after hatching, the little creatures begin to thrive. It will ever after be her lucky number.

Twenty-one people are invited to Henry’s leaving do, herself among them. She sips half a glass of bubbly before heading back to the lab. The ammonites are most active at night.

Thirty-four proves her greatest birthday. Her ammonites have mated successfully, throwing off the vestiges of their nautilus-hybrid lineage. Nothing can compete with this for a birthday present. Her colleagues celebrate with her. She wishes Henry was still here.

Fifty-five journalists leave messages for her on the day her research is published. She returns only three of their calls.

Eighty-nine hatchlings survive the planktonic stage. Her increase in funding pays for a bigger tank.

One hundred and forty-four specimens aren’t enough to rejuvenate an ecosystem. She hopes the ammonites’ prolific offspring will boost plankton levels while the adults provide a predator’s balance, thereby injecting life force at both ends of the food chain using an ancient animal known for its resilience.

Two hundred and thirty-three juveniles are stolen when the lab is burgled. She discovers empty tanks and smashed equipment. Heartbreak chokes her; the young ones are doomed without her care. She’d been experimenting with new fragments of nautilus DNA to diversify the gene pool. Now she has to start over. She sobs amongst broken glass and scattered utensils.

Three hundred and seventy-seven minutes pass before Henry calls. He’s heard the news. Is there anything he can do? If she’d like his help, she’s got it. She doesn’t need his expertise, but she could use a friend. He books the next train back.

Two hundred and thirty-three glass fragments are swept up while they talk. The act of restoring order to the lab alongside a sympathetic ear calms her nerves and reignites her determination. She hasn’t come this far to balk now. The police can’t promise anything. Henry has faith in her. She uses it to bolster her faith in herself.

One hundred and forty-four letters have been cut from a newspaper to form the most cliched of ransom notes. Despite its comic appearance, it chills her. The ransomer wants £100,000 in exchange for her ammonites. He’s sent the same demand to several rivals. He doesn’t need to declare a time limit; she knows how valuable her specimens would be to another scientist. Her latest research could be usurped before she’s even begun a new round of cloning. She crumples the note in sick fury. She doesn’t have £100,000.

Eighty-nine weeks pass. She clones more hybrids, diversifies the genes, raises new hatchlings. She hears nothing of her abducted ammonites, and no more from the ransomer. If someone else paid up, they’ve been awfully quiet about it.

Fifty-five possible sites are scouted for the trial release of her mature specimens. The Mediterranean is large enough for an oceanic microcosm and enclosed enough to monitor the experiment. She chooses a quiet Turkish lagoon, a secluded Moroccan beach, and a sea cave in southern France.

Thirty-four tests determine her ammonites’ readiness. She monitors their food intake, hormone levels, water readings, and dozens of other essentials. They are acclimatized over several days in tanks at each site.

Twenty-one hours before the release in Turkey, Henry phones. He’s ecstatic for her, yet she senses contrition. “I paid the ransom for you,” he tells her. “But they’d all died, and I couldn’t bring myself to tell you. I saved their shells; I’ll have them sent to you for study. Forgive me. Please.” She hangs up, hurt and relieved.

Thirteen salty splashes: one for each tagged creature. She watches them join the shoal ahead and is unprepared for the bittersweet emptiness that takes their place in her heart.

Eight text messages arrive from Henry during the ferry crossing. She replies when they reach Morocco. ‘I’m speechless… thanks for looking out for me. See you in France.’

Five news crews appear at the French site. One of her assistants must have tipped them off. The world might as well be informed; her years of work will either pay off or they won’t. They film the last of the new ammonites swimming away, proving her hopes aren’t the only ones resting on the creatures’ success. As the waves engulf them, Henry rests his arm around her.

Three grants come in at once. She knows Henry’s financial sacrifice safeguarded her success. She asks him to collaborate with her. He grins. “Thought you’d never ask.”

Two years later, the ammonite population is climbing. There are signs of other species stabilizing, but it’s premature to draw conclusions. Nevertheless, her doubters are wavering.

One boat sails across the sparkling Med, a scientist at its helm. Another prepares scuba gear. They thought of honeymooning in the Alps, but this is what brought them together. They drop anchor and don their gear for the trip’s first dive. She smiles at Henry and falls backward off the deck.

One ammonite appears before her. And another. Two. Three. Five. A whole school of perfect spirals. Her heart lifts. They’re thriving. 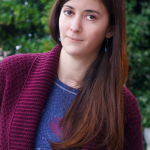 Eleanor R. Wood’s stories have appeared in Plasma Frequency, Bastion, Pseudopod, Crossed Genres, Sci Phi Journal, and Liz Grzyb’s recent anthology Hear Me Roar, among others. She writes and eats liquorice from the south coast of England , between wild moorland and sometimes wilder sea. She lives with her husband, atwo marvellous dogs, and enough tropical fish tanks to charge an entry fee. She blogs at www.creativepanoply.wordpress.com.