Freedom Lies in Being Bold

If We Live to Be Giants

Paige was itching to paint something when she noticed and remarked on the birds—grackles and ravens mostly—that were flitting around carrying bits of copper wire and circuitry. Now that she mentioned it, the others at the garden party became so enrapt with the birds that they didn’t notice her sketching on a napkin.

The parties were her husband Bud’s idea, to distract Paige from her urge to paint, and they worked to a point. When she was with people, she was good, happy, even. But when the parties were over, the emptiness returned, and the happy space that laughter had created inside her lapsed in painful contractions, as with any muscle stretched too far.

“Been that way for a while,” Bud said. “On the way to work, I keep seeing birds gathering scrap.”

George, the biologist, a friend of Paige’s from college, said it was quite natural for birds this time of year. “They get it in their heads that they’re going to wipe us all out,” George explained, “so they gather parts to build a machine, but they never finish it.”

Everyone looked over the fence to the western horizon, where a haphazard pile of scrap and mechanical parts as tall as an office building loomed darkly against the afternoon light. Paige was drawing a monstrous and beautiful thing. Not the catawampus structure the birds were building, but what they wanted to build. Craning swan-like over the land, looming like a showerhead or a scorpion’s tail, a machine of devastating power.

People laughed and agreed that was true.

“Still, someone should do something about it,” Terry said.

“I don’t think so,” said George. “Because someone will do something about it, so no one needs to bother doing anything.”

People agreed someone would put a stop to it, so they didn’t need to worry.

Looking at the bizarre structure with its many dangling ends, Paige had a powerful urge to find a brush, but painting was too dangerous. She’d been a promising painter, but recently she’d had to stop painting because it threatened her health.

At first it had been the landscapes. She’d paint a dark fairy tale forest and then the next day feel a pernicious itch, as if there were scratchy Douglas firs growing under her skin. Then it was the portraits, who started visiting at odd hours. Never did she answer the door when the eyeless, inhuman figures she’d painted came knocking. Always it was Bud who sent them away with a firm, “That person doesn’t live here.”

Bud had been supportive for a while but made Paige throw out her supplies after her disastrous experiment with Japanese water colors. That had ended in an early morning trip to the E.R., where Paige received an emergency blood transfusion after the doctors drained three pints of paint from her veins. Now Paige had been clean for over three months, but the drive to pick up a brush was always there.

Everyone laughed except Paige.

As she scribbled, the din of construction grew ever louder and the party guests fell silent. No more laughter. As the structure rose higher, it blotted out the sun.

Even knowing what was happening, Paige couldn’t stop herself from sketching.

Above their heads, beams and cables and wires and solar panels were assembling into something immense, borne into the air by the will of a teeming whorl of songbirds.

And now Paige felt Bud’s hand alighting gently on her wrist. “Should you really be drawing?” he asked. “Isn’t that dangerous for you?”

Paige looked to her husband as the machine’s reactor droned to life, the sound like the blast of a foghorn, followed by a low thrum. How sweet Bud was, this man who’d installed a cat-door in their first apartment so the cats she’d painted could come in and out.

In that moment before the birds’ doomsday machine activated and disgorged its river of golden light that dissolved the atomic bonds of all matter within fifty miles, reducing everything to its native, raw state of disorder and infinite possibility, she wanted to put down her pencil and to unspool herself onto Bud’s lap, to melt into resin and leach into his clothing, his hair, his skin. 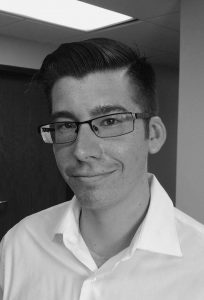