Ghost of the Pepper M.K. Hutchins

In the cool of the morning, I walk between my rows of peppers, brushing my fingers against the glossy leaves of Anaheims, Brazilian Starfishes, and Carolina Reapers. I grow peppers the way my mother and grandmother before me did—I grow them for the dead.

Grandma taught me about peppers, how they gather up the anguish of the deceased as sure as they gather up sunshine. Grief is strong stuff—it concentrates into the sharp heat of a green jalapeño, the sweet burn of the habañero, and everything in between. Once someone’s digested their sorrows, the dead can rest in peace.

Martin, my neighbor, is always telling me I should sell seeds or enter a competition at the fair. But it doesn’t feel quite right. Like I’d be profiting from someone’s pain. Martin doesn’t understand—like most folks outside my family, he can’t sense the dead when he eats peppers, and I’ve never explained it. Better to help the dead out quietly, on my own.

As I snag a few shishitos for breakfast, a blotch of black catches my eye, dangling from my ghost pepper plant. It’s the wrong color for a ghost pepper.

Well. I’ve gotten odd peppers before. Grandma taught me to cultivate my acre of land soulfully—a patch of peppers surrounded by the right flowers and trees to draw in stubborn old regrets that evaded other folks’ plants. I’ve gotten peppers as hard as peanut brittle from calcified grief, and lace-thin peppers from ancient sorrows that hardly remember how they started.

I walk up and feel the black ghost pepper between my fingers. This grief is only a year old, but the pepper’s filled to bursting with it. Like the plant somehow scooped up a hundred lifetimes of sorrows at once. I can’t let that fester. I snip it, too, and head inside.

I blister the shishitos in my cast-iron skillet first, and snack on those. Most of the time, they’re mild. And these are. I get the impression of elderly folks, tinged with the sad warmness of missing the people they’ve left behind.

While I munch, I slice up the ghost pepper and scramble it with two fresh eggs from Martin—I often trade him cayennes and such. Barter doesn’t feel wrong with peppers.

In a jiffy, I’ve got a pile of golden orange scramble, studded with black. I dig in.

Grandma taught me to love the sting of even the hottest peppers, but this is something else. My eyes swell shut. In my hurry to the fridge, I knock the plate onto the floor. I grab the milk. I gulp. I pour it over my head. And then I lie on the floor for an hour, trying to remember how to blink. When my eyes clear, I realize I broke the plate, shattering ceramics through the eggs, chunks of pepper, and all that unresolved sorrow.

Those woes will find another pepper to scoop them up. Hopefully in a way that someone can actually digest.

The next morning, the black ghost pepper is back. Right where it grew before.

There’s nothing for it. I can’t manage it cut up, so I swallow it whole.

There’s only one man’s sorrow inside this pepper. Each one flashes before me as a face—the face of someone he couldn’t save. Burned faces, cut faces, old sagging faces. I can’t tell if he was an ER doctor, or an army soldier, or a pastor. But he sat with plenty of people in their last moments, holding their hands, mourning their own looming deaths with them. Soaking in their regrets right through the palms of his hands.

I can’t keep it down. My stomach cramps and I’m in the mud, coughing bile up my nose. I feel like I’m breathing shards of glass.

A hand. On my shoulder. Martin. He helps me into his car and drives me to urgent care. They can’t do much for me there, except check that my throat is all right when the vomiting stops.

Martin takes me home. “Well, you were right about not entering your peppers in the fair. Judges would probably disqualify you for attacking them. How many did you eat?”

Just one. But I don’t say it out loud.

The black pepper is back in the morning. This man deserves to have his anguish digested and put to rest. I can’t change his sorrows, but I absolutely want to witness them. Just like he witnessed for so many others.

But mourning with someone when you can’t do anything to help—that takes an iron stomach. I’m not him. I can’t do it alone.

I kneel in the dirt and stare at the pepper as the sun rises.

Martin walks, then runs toward me.

But Martin frowns at that. “You’re looking mighty sad to me. Maybe you need a day away from here. Fair opens tomorrow. Come with me?”

I stare at the ghost pepper. I really can’t handle this by myself. “Only if you’re driving the truck. I’ve got a cooler I need to bring.”

Martin raises an eyebrow but nods.

The next day, the other competitors at the chili cook-off laugh at me for bringing only one little black chili. But it’s more than enough to flavor an eight-quart pot. Dozens and dozens of folks take tiny tasting bowls—from judges who compliment the smoky flavor to teenagers trying to show off, who walk away with red noses. Martin has two bowls.

I have just one. I feel the ghost’s pain over a young woman who died far too early. He wept with her over the scholarship she’d never take, the places she’d never paint, and the good-byes she’d never get a chance to say. I feel his sorrow burn up my nose, mingling with coriander and onion.

I couldn’t mourn for him all alone. Maybe no one should have to. 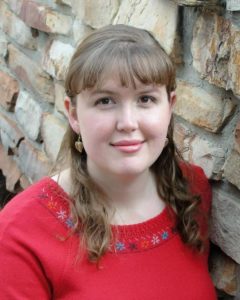 M.K. Hutchins regularly draws on her background in archaeology when writing fiction. Her YA fantasy novel Drift was both a Junior Library Guild Selection and a VOYA Top Shelf Honoree. Her short fiction appears in Podcastle, Strange Horizons, Fireside, and elsewhere. A long-time Idahoan, she now lives in Utah with her husband and four children. Find her at www.mkhutchins.com.