I Speak the Master’s Will

Felt Along the Seam

The Christmas card arrived late. It cost 599 rubles and played “Holly Jolly Christmas“ for thirteen seconds, until the “this yeeear” bit.

“Jesus is the Reason, for the Season!!”

Your Father and I pray together every day

She meant well, but none of it rang true for me. I reflexively tore into the card to see the cheap piezo speaker and integrated circuit inside. Just overpriced electronic junk, accompanied by an ineffectual statement of faith.

I thought of Father’s ventilator and Mother next to it, praying in tongues. She was the child of American evangelicals, that rare missionary kid who never stopped believing.

I popped the lithium cell out of the card, dropped the rest in the bin, and rolled back to my workbench.

A month later, a birthday card plopped wordlessly through the mail slot. I looked up and shook my head. I paid a Sochi postman 4,000 rubles monthly to deliver to my private lab in a shallow cave outside city limits, all for a couple belated greeting cards. I wiped the tip of my soldering iron with a wet sponge and set it in its stand.

“Christ is our Great Physician!”

Your Father and I miss you

You should come home

None of her claims were true—most falsifiably, the bit about my father. Vegetables can’t miss.

The Moscow Hospital’s legal representative had spoken to us in Russian. “We must consider his quality of life. What is the reason for not letting go? Is it for him or is it for yourselves?”

It was the first time I’d ever seen my mother react in anger. She slapped him across the face, stared for a moment with a heaving chest, and stormed out. The man didn’t blink. He turned to me and said, “This doesn’t need to be a bilateral decision.”

My father lay between us, breathing in perfect shifts. Everything was there—all the same body parts and grey matter as six months ago—just not doing its job. Mother firmly held that he was alive and aware, simply unable to connect his consciousness to his motor functions.

I didn’t know what to think, other than that I missed his voice.

“We have a duty,” the representative continued, “to dedicate our limited resources to viable cases. We’d like to avoid a legal battle, but are prepared to make this decision for you, if necessary.”

“Viable cases?” I repeated in Russian. I stared at my father. Who could separate vegetable from viable? It was outside my purview, even as a medtech engineer. I designed machines; I didn’t write the ethical rules surrounding them.

I sat down and held Father’s hand. He smelled bad up close, months of cursory sponge baths piling up. The representative made me confirm that I understood the situation and turned for the door. I mumbled an apology for Mother as he left.

I sat there for hours knowing I couldn’t make this decision. There had to be another way. I went downstairs and got a taxi to the airport.

It was morning, near the end of winter, when the machine on my workbench started to pump and writhe and beep. I encased its frail innards in chrome and emerged from the cave.

I stalked the Caucasus Mountains with a shotgun folded over my forearm until I found a grand old boar nosing for mushrooms under a leafless Georgian oak. I shot it in the head and dragged the heavy corpse back to my lab, leaving a bloody trail in the snow behind me.

Atop the boar’s headless shoulders, the silver machine perched shakily. For testing purposes, biointegration was easier without worrying about superfluous body parts. The real thing would take a little longer, but Father would keep his head, wearing the machine as a backpack. He’d walk out of the hospital on his own two feet. If he was aware, as Mother claimed, he’d enjoy his newfound mobility: picnics and real baths and neighborhood strolls.

The autoaccelerometric compensators kept the top-heavy beast balanced on its hooves. Once I got the heart rate right, its body warmed. Its lungs expanded and contracted in timely shifts.

The motor functions interfaced somewhat less perfectly. Its legs struggled to move conjunctively, and the thing fell over a hundred times throughout the night. And a hundred more the next morning, and the next evening.

But slowly, microadjustment after microadjustment, it became viable. When it could follow my laser pointer across the length of the lab without tripping over itself, I switched it off.

It would forever be a work in progress, a lifetime of small tweaks—but what wasn’t? It worked. That was what mattered. I was ready to go home.

I woke on the cold floor, cheek wet from drool, to the sound of a snowmobile engine. I looked immediately to the prone beast by the door.

I saw it with fresh eyes, and it was undeniably grotesque. The harsh contrast between animal and machine, the blood-stained neck, the limp body waiting to be artificially awakened. And the worst part was, even with all this work, its functionality ended at the neck. I wouldn’t hear my father’s voice.

Maybe one day, though. I’d at least bought us time.

I approached the boar and turned it on. As it stood to attention, it released a smell, something like methane and death. Nausea bubbled in my throat and I doubled over, dry heaving.

That body was not alive.

Not at all. I was just forcing air into its lungs.

I heaved again, then gathered myself, wiping spittle from my mouth. There was an envelope on the floor behind the boar.

You should come home now

I switched the boar off and it sank to the floor without protest.

This time, everything Mother said was true. 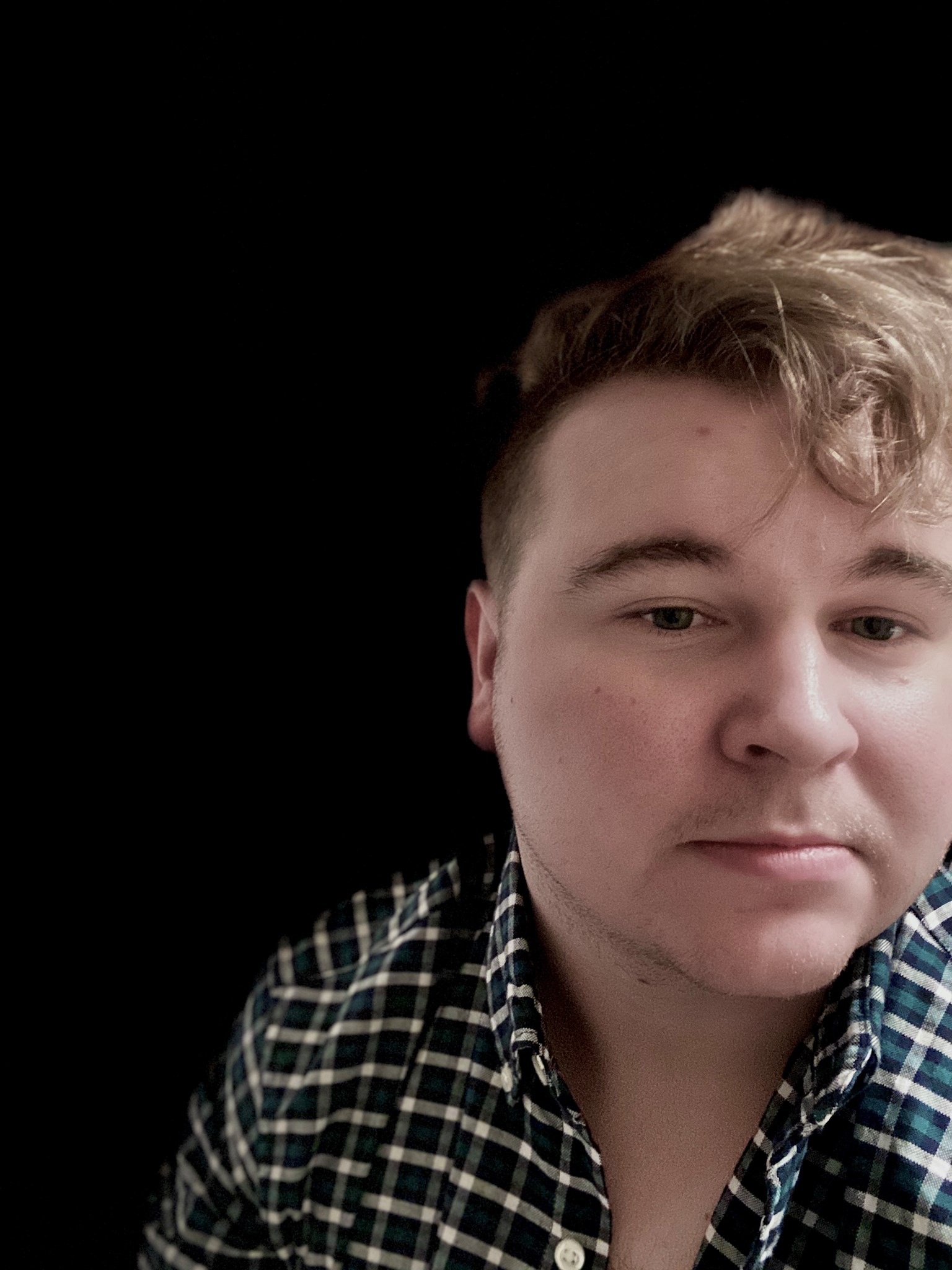 Originally from Louisville, Kentucky, G. T. Knight‘s pronouns are he, him, his, and y’all. He currently lives in rural South Korea, where he spends his free time bicycle touring, traveling in East Asia, and, of course, writing fiction. You can find him at gtknight.com.