How to Win a Pulitzer Aishah Ojibara

Ms. Ann Foster, journalist and Africa’s imminent saviour, stands outside the hotel, sweltering in the hot sun. If history books are to say anything about her–and they definitely will when she succeeds–it will be that she, a brave soul, left the comfort of sweet Australia and its ravishing air for Africa’s toiling heat, moved by the urge to save the African people. Ms. Ann Smith, they’ll say, Discoverer, Savior of the African People; Creator of the New World, modern-day version of Christopher Columbus.

In her hands, a camera and a handbag. Weary from the journey and eager for a bed to sleep in, her eyes roam the surrounding area impatiently. She feels like a splash of red on a plain white sheet, sticking out from everyone else. She is grateful for the gated parking lot, without which she would be subject to stares and murmurs.

Waiting for James, she thinks. Here I am in Africa waiting for James. James Appleson. James Briar Appleson. It’s an odd name. She imagines a stocky man with a receding hairline. She imagines that he has a British accent and a nice voice, too, something to mitigate the effect of his ugliness. A talented journalist praised by all and sundry. She is sure that he’ll like her.

If things go well, she will be back in Australia in four days’ time. How hard is it to take a photo? A click or two from a nice angle and her job is done. Days fewer than this have made history, so why not? But of course, this time it will be different. This trip will sap her energies. It will put her right in the middle of the horror that is Africa. Of starving kids and war-torn areas and young girls being sold into marriages. It will tear her soul apart, suck up her emotions into a vacuum of depression and leave her empty. In the best-case scenario, she’s richer and hence can afford the multiple therapy sessions. In the worst case scenario? She can’t bear to think about it.

The hotel, a surprise. She did not expect to see high-rise architectural designs. Mud houses with roofs made of raffia, but not this tall building, sturdy and magnificent, with circular balconies, air conditioning, and tiled floors. She did not expect to see rich Africans, communicating in fluent English, dressed in expensive designer clothing. Africans who don’t point at her or stare wide-eyed. Africans who look past her like she is a part of the furniture. There are Africans richer than she is. It’s a surprising discovery.

The calm before the storm, she thinks. All of this is an illusion. The real Africa is out there. Right in the heart of Kenya. The Africa she has read about in newspapers back in Australia. The Africa of hunger, HIV, and death. She will take photos of that Africa only. She will find the most gruesome details and write long, detailed articles with the aim of stirring pity, with the aim of appealing to the merciful side of benevolent rich people. And for herself, she hopes to win a Pulitzer. For the emotional torture she will experience, she deserves the recognition.

A tap, slightly, on her shoulder. She turns. It’s James Briar Appleson. How she knows this is a mystery. Yet there’s a solid conviction, a certainty that she is right.

“Sorry for keeping you waiting. I’m James,” he says. His face, sweaty like hers. Two journalists in a foreign country, different in every way except this. For example, she would never have thought it appropriate, tapping a stranger on the shoulder. She considers it intrusive, an evasion of personal space. Here in Africa, she will have to make do.

“Nice to meet you, James. My name is Ann. Looking forward to the moments spent with you.”

A lie, but this is Africa.

For more information on the author, please read our exclusive interview with her. 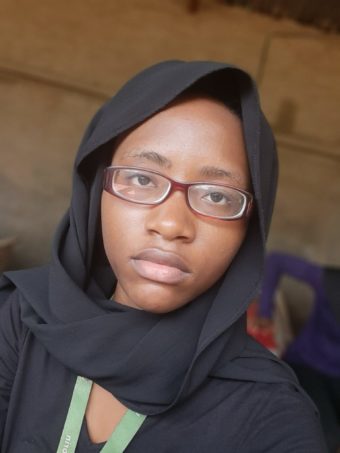 Aishah Ojibara lives in Ilorin, Nigeria, where she studies Health Education at the University of Ilorin. She hopes to become an accomplished novelist, as well as an individual who drives impactful change in her community. In her spare time, Aishah loves to debate and travel. Her favourite writers include J. M. Coetzee, Zadie Smith, Chimamanda Adichie, and several others. Aishah practices the philosophy of Stoicism, as well as the idea of egalitarianism. To her, writing is a necessity, as well as the need to call out societal flaws and urge everyone to become better individuals. You can follow her on Twitter at: @aishahojibara.

Her work has also been published in The Nthanda Review and Through The Eyes of African Women.