I’m not generally a fan of stories from a child’s POVs. I find a lot of stories with young narrators take the tack of making the prose almost overly simplistic (short sentences, and simple words), in order perhaps to make it clear this is a child speaking.

For me, the best stories featuring children aren’t simple at all. They take the wonderful, open imagination of children and spin it into new possibilities.

But all that imagination can have a dark side.

That’s what “Hungry” does. It’s a child’s slight misunderstanding that shifts tragedy to horror. And Tree Riesener makes the child’s conclusion so terrifyingly logical. She makes it feel possible. And really, how sure are you that when your day comes, your children won’t decide to be cruel to be kind. How can we ever be sure?

Quiet. You sit quiet as a mouse in the corner. Push a little doll around and hum la-la-la so they forget you’re there while they have the cocktail hour.

That’s how you find out they’re killing Grandma.

Not a single bite to eat or a swallow of water. Your mother is killing her mother.

You feel like a balloon somebody’s lost the string of and you’re helplessly blowing in the wind.

You didn’t realize they were that powerful that they could just kill somebody, especially their own mother. You wonder if someday you’ll have to kill them by not giving them anything to eat or drink and you decide you’ll never do it, never.

Dead dead dead forever, all skinny and dried out like an old sponge and nothing in her tummy. That’s what Grandma will be.

Grandma that you visited in her little house of lace and cookies with real green plants hanging at all the windows and a bird feeder in the garden. Grandma who put a little bed right in her room for you when you visited so nothing could get you and never said don’t be silly when you worried about vampires under the bed and while you were drying the dishes for her, said you didn’t have to tell mommy and daddy.

Sometimes you have to be cruel to be kind. That’s what they keep saying while they pour each other drinks. They’re the grown-ups and they should know. But they say everybody at your new school really likes you, they’re just teasing the new kid, when you know everybody hates you to hell and it won’t ever stop until you’re dead.

You know what they’re telling you about Grandma is true because Mother sneaks you in, whispers something to the nurses so they look the other way, and takes you in to say goodbye so with your own eyes you see Grandma in the bed with sides like prison bars, her skinny arms that look like tissue paper with black and blue blotches stretched out and tied down and stabbed with silver needles.

You think they’ll do something, but they just stand there looking down at her and Mother holds your hand in a tight grip so you can’t get away.

Grandma can’t say anything because of the tube in her mouth but her eyes finally leave Mother and Daddy and roll really scared at you, like she’s saying please, you’ll help me, won’t you? Remember what good times we had that week you stayed with me, baking cookies and sitting on the porch, filling the bird feeder? We can do that again, if you’ll help me.

Well, of course you start to cry and a nurse comes running in, looking mad like teachers look when you’ve done something wrong. Mother shakes your arm and says shhhh but you don’t care and just keep on wailing. Your father hisses at Mother that he told her this wasn’t a good idea and she hisses back at him.

Then they take you out into the hall to a little place with hard plastic chairs you keep sliding off of and say in those sweet voices they use when you fall down or get hurt that Grandma doesn’t know anything anymore, it’s just her old body there, she isn’t hurting, is just waiting for Jesus to come and get her.

Jesus? Who’s Jesus? The only time you’ve ever heard his name is when somebody gets mad and says oh, Jesus Christ!

You ask if Jesus is a doctor and will he help Grandma and they look at each other and smile that way people do when little kids say something so stupid it’s cute. How are you supposed to know about Jesus when they never told you, never let you know he’s also God in Heaven and flies down like Superman to get you when you die and takes you back with him? They tell you now.

That evening they go out and stay for a long time. When they come back, they pay the hotel sitter, then ask you to sit down and tell you in their nice voices that Jesus has come and Grandma is gone.

Since you don’t know what you’re supposed to say, you just say okay and while you’re brushing your teeth, you hear them talking about adding this to the list of stuff Dr. Samuels is supposed to help you with. Your throat and chest are bursting with pain but for some reason you don’t think you should let them know.

They take advantage of being in the city to do some shopping and hire the sitter to stay with you while they go to the funeral, that they say isn’t for little girls.

At least Jesus has come for Grandma. You learned long ago that they tell you a whole bunch of lies but that much is probably true. You sort of remember her singing, that time you got to stay with her, that she had a friend in Jesus, and if Jesus can float in air and carry people back with him like a lifesaver, he’ll know about her needing a snack and by now she’ll have had time to eat several times, with Jesus.

You say you’re not hungry, but they order you a fancy sandwich held together with toothpicks and ginger ale with a little paper parasol stuck in a cherry. You have to eat, darling, they say and you know you’d better do it because there’s no way in the world you ever want to make them mad at you again. 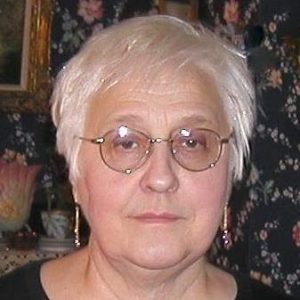