Well, the child who lives there. There was a miscarriage. There is only one child. The mother told her daughter, You are a big sister, even though the aunt called her brother “a fistful of unviable cells.”

The child does not have a container big enough for the idea of “unviable cells.” She does, however, understand fistful.  She clenches. She fills her fists. Can feel all the blood rushing there, and when she opens them, the first leaves appear, a small stem rooted to the palm.

The neighbor’s house is covered in ivy, was always covered in ivy. Even the door: totally ensconced. Even the windows. One had to part through the ivy like curtains to lean out, wave hello. There she was–the little girl–pushing out her window waving and waving. We (in the neighborhood) were waiting for her to fall out. To have two tragedies in the ivy-covered house instead of one. Even though the aunt said one didn’t count, wasn’t viable.

The aunt lived in a picket-white house on the edge of the block, rows of red and yellow tulips lined up equidistant in the window-boxes. The aunt had lived there forever, it felt like. Had white furniture, white carpets, white pillows, white clothes. So that one, peeking in her window, would see what appeared to be an empty house, a woman’s head floating somehow in the air, a severe neck, and if you squinted, you could make out a vase full of clear water and thin-stemmed white roses. A woman with sharp features who, turning a corner you couldn’t tell was there, was suddenly disappearing.

The girl went to school and was sweet. Wrote in cursive. Was terribly disorganized and very athletic. She liked to run and the ivy ran with her. It made her faster. It was like having extra legs. She was quick as a dog, that girl. The children at school always called her Ivy but we (in the neighborhood) called her “her.”

She always said she had a brother, even though what she had was a tombstone in the backyard beneath a willow. We heard her singing songs to it: moon songs and sun songs and songs about chewing gum and happy birthday on his (not-birth)day every August. There she was making a wreath of flowers and sticks. There she was playing a ukulele so hard the strings snapped. That yard was swarming with ivy, swathed with leaves.

The aunt in the white house was petitioning that the neighborhood begin an HOA, have standards, make ourselves shine.

Some of us were into it. Some of us had dog prints through our backyards, shoved broken stoves and cracked microwaves into the corners of our porches. We (in the neighborhood) were nosey, sure, but hands-off-y too.

We saw her fall out the window once, you know. Heard the bone break. It was so quiet: just a little grunt of her body hitting the yard, the crack, the bone sticking out of her arm like an idea had just occurred. We (in the neighborhood) were watching. We saw her shove the bone back in through the skin flap, watched the ivy exhaling and exhaling, wrapping firmly around it.

Some of us were into it. Let the ivy curl around our ears and cinch into our belt loops and spiral up and around us until we were photosynthesized into something new.

Some of us set fires. Used pesticides, chainsaws.

The aunt, though. The aunt! Last seen wielding a white rake, white shears. Disappeared into the ivy and was never seen again.

Well. The ivy was of course the girl.

“Disappeared into” is of course the euphemism.

The way we (in the neighborhood) picture it is something like this. A girl covered in ivy knocks on that white-white door. She is bigger than she used to be. The ivy around her makes a hissing sound. The aunt bolts the lock, but the ivy is already pressing like liquid through the cracks, the ivy already is creating a fishnet of vines on the floors, the ivy already angry, angry a long time, and the white shears can’t help this time, and the white rake gets sugar-snapped, and the girl beneath, the part-ivy-girl goes inside, and the windows darken, and the vines wrap around that neck, and ivy fills the mouth, and we imagine the carbon dioxide those leaves of hers drink up. We can hear a drinking sound, a choking sound. We imagine the aunt doesn’t make it, isn’t viable.

We (in the neighborhood) don’t really talk about that sunken-in, cracked apart white house at the end of the road anymore.

The neighborhood kids are curious, sure—go creep in there on midnights, on Halloweens, on nights when they’re in love. We know this. But we also know some of them come back. And some of them don’t. 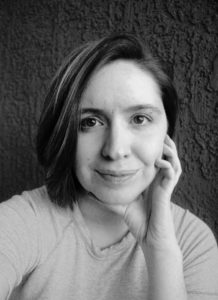 Melissa Goodrich is the author of the story collection Daughters of Monsters, the poetry chapbook IF YOU WHAT, and the collaborative collection The Classroom forthcoming from Goldwake Press.  She earned her MFA in Fiction from the University of Arizona, and her stories have appeared in American Short Fiction, The Kenyon Review Online, Passages North, PANK, and others.  Her honors include the 2018 Passage’s North Waasnode Fiction Prize, the 2016 Tucson Festival of Books Fiction Award, the 2013 Margaret Sterling Memorial Award, and the 2012 Academy of American Poets Prize.  Find her at melissa-goodrich.com and tweeting @good_rib.