The seawall of New-Galveston glistened shell-white in the years before you were born. I paddled over to pick your daddy up from work, pressed my palm to the warm concrete, and waved at the top-men. They worked the blinkie-lighted antennas and got to look down inside the fifteen square miles of the Richie-rich and tourists in the bowl. The rest of the island was below the waves.

We were just married, and my heart did a flounder-flip when I saw him come out the pumpers’ gate, with his lopsided grin and greasy coveralls. He eased into our canoe and slapped the hull’s side.

We had to hurry that day; it was the first of the month. He helped me paddle flash-quick to our rickety tug, the Merry-May. We had three floodgates to get through before our tuition deadline.

See, we were married, but in two different colleges. Two different service areas. I was interning, checking mosquito traps and getting a bio-degree with Lone-Star. He was working pumps and finishing up his hydro-degree with Galvez-college. A student ID chip on our wrists linked to the registration tags on the Merry-May, our legal homestead. Schools tracked these with GPS — we called it pinging — and baby, both boat and body had to be in the right place to be considered in-district.

Your daddy’s school pinged on the third week of the month; mine on the first. We both needed in-district tuition discounts, which meant us moving the boat up and down the bay. Lots of people did it. It was practically a parade of family barges, bio-diesel sailboats, pontoon shanties, all puttering up the bays on first-Mondays and third-Thursdays.

“How’s work?” I asked as we chugged along. Miles ahead of us were the great sea-gates of Houston.

I thought of the Richies back in the Galveston bowl, with their fake beach and old cobblestones and horse-drawn carriage rides.

“Get paid this time?”

Wet-footers like us can’t get a good job without a degree, so until then it’s interning. We got enough for beans and rice, while the rest auto-paid down on the principal.

I’m still carrying my mother’s student loans, even though she died years ago. In-district is the difference between being in debt only until your 60s or passing it along to your descendants.

I kissed the back of your daddy’s dirty neck, and we floated over Pine Line. Below us were the old dunes from when folks took their Christmas trees to the beach, trying to shore up the sand. That was back before the sea-walls. No lie, sometimes storms roll those old bark-bones and strings of tinsel float up. That was what he proposed with, wrapping a silver strand around my finger like spun moonlight.

I leaned over the rail and saw, bobbing right along with us, a star tree-topper. I scooped it up and took it into the wheelhouse.

“Hope and goodwill,” your daddy grinned.

After gate three we were in Ship-Channel Lake. Party time. Students coming up from the Bay, Seabrook, East Lake — coming from the off-shore rigs and rice fields. All scrambling to get into Lone-Star’s district for the location ping. Someone yelled that College of the Mainland, a campus perched high on the stilts of Texas City, was pinging too.

That made folks nervous; it was even more raucous. We knew a quiet anchorage through a cut, just off Lost-Forest Lake. It always spooked me, all narrow and shallow. I looked off port, and a crazy guy was standing naked in a half-submerged tree, dreadlocks blowing. Looking right at me.

“Joshua shall be his name!” he shouted.

But I knew it was something else. See, I knew I was pregnant with you. And I got to thinking about Moses’ son and Old Testament stuff, how there were cities with walls then too . . . I got chills.

Suddenly there were air-horns and yelling from the boats.

“They pinged early?” I asked.

His face was pale. “And Galvez-college just pinged. They all pinged at the same time!”

The flood gate now looked like a giant guillotine. We heard shouts from the boats; everyone else was checking their e-tabs too. Folks went crazy, uselessly gunning engines, screaming curses. They popped flares, revved into nowhere.

The wakes hit us hard and pushed us into the dead tree-tops of the cut. Drowned limbs scraped at the hull. The tow-rope broke, and the canoe rolled, sinking like a lost leaf.

The boat bucked, and everything fell from the walls. Dishes cracked. The black limbs of the dead forest were like hands.

Your daddy tried to steer us free, but I saw the star topper swinging, felt you in my belly, and grabbed the wheel myself. I followed that swinging star like a crazy person myself until we were in the clear.

See baby, I thought I’d save the world with bio-research, and your daddy with engineering. But we were both wrong. Sickness is getting worse, waters getting higher. And when he drowned in the pumping station of New-Galveston, saving all the Richie-rich from another summer storm’s surge, his college didn’t forgive one cent of his loan. He was just an intern.

Maybe all the walls in the world need to tumble down, so folks will learn to swim together.

That’s how you inherited our debts. The burden’s on you. There were fines and fees, and I’m sorry. But baby-boy, you’re going to be smart and savvy and know how to fix this world.

I know, because you led us out of the wilderness. And when I first saw your baby eyes and felt your little fingers grip my own, I heard the trumpets of angels. 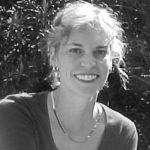 Joy Kennedy-O’Neill is an associate professor of English at Brazosport College, on the Texas Gulf Coast. She teaches composition and literature, including the class “Zombie Lit: The Bare Bones for Brains.” Her works have been published in Strange Horizons, Daily Science Fiction, Everyday Fiction, New Orleans Review, and in collections by Prime Books and Paper Golem Press. Many of her works and other info. can be found at JoyKennedyOneill.com.